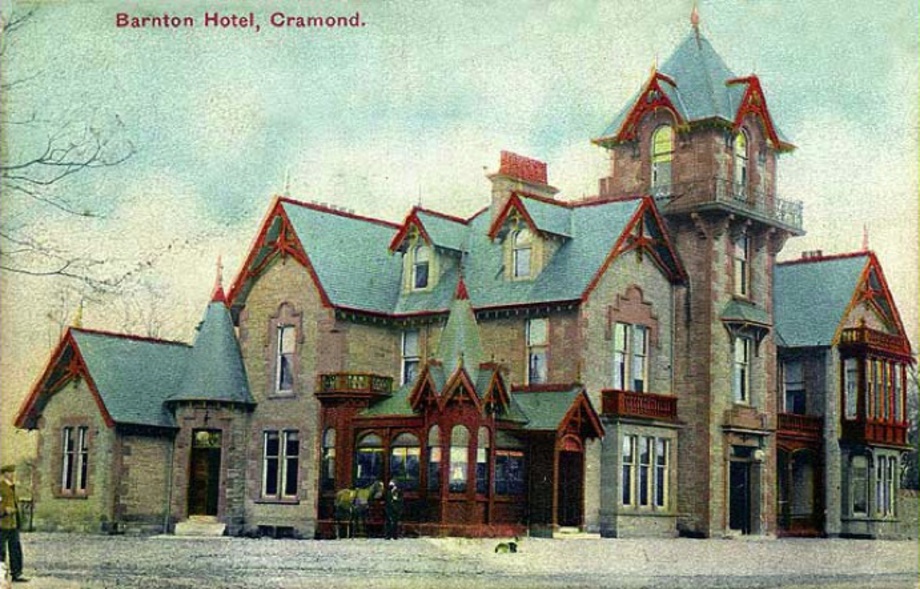 Barnton Hotel Golf Course. First mention 1897. “It has been left to the Barnton Hotel Company to inaugurate a new departure in the provision of a great public recreation ground for Edinburgh. With characteristic enterprise, the Company have purchased part of the estate of Cammo, in the parish of Cramond, and intend to lay down a golf course, and to devote part of the lands to pleasure grounds. How much Edinburgh, and indeed most large towns, suffer from the want of a properly equipped recreation ground has often been made the subject of complaint. Parks and hills, and gardens, we have in comparative plenty, but of recreation grounds, in which all sections of the public can follow at one and the same time the particular games pleasing to them, not one.

Provided the grounds are big enough, there is no reason in the world why golf, cricket, lawn tennis, cycling, bowling, curling, and skittles should not be indulged in within the same enclosure. The Barnton Hotel Company mean to provide the opportunity for trying the experiment. The ground they have acquired is 113 acres in extent. They have thus abundance of room for carrying out the object in view. Every part of the land is capable of utilisation for some purpose or another and there are the additional attractions of beautiful scenery and lovely landscapes. It is a bold scheme which the company have undertaken. Experiment, no doubt, it is, but it is one which thoroughly deserves to succeed. 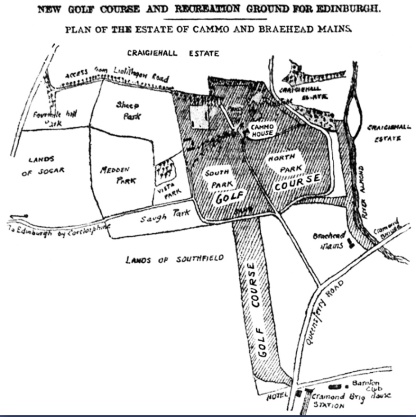 Cammo estate, in the centre of which there is a fine old mansion house, beautifully situated, is five miles West of Edinburgh, and is bounded on the West by the river Almond. The part of the estate which the company have bought consists of the polices and a strip of arable land, the latter being acquired for the purpose of extending the proposed golf course right up to the hotel. Cammo House, which goes with the purchase, lies half a mile to the South of the Queensferry Road, and is about fifteen minutes walk from Cramond Brig Station. Public roads partly surround the polices, and though comparatively secluded, the ground can be reached from almost any point, there being also a right of way to the Linlithgow road.

The mansion-house contains four public rooms, smoking and billiard room, and fourteen bedrooms, so that it would make an admirable club-house. It commands splendid views of the Pentland and Corstorphine hills and the Firth Of Forth, but the charm of the estate lies in its sylvan beauty. Few people imagine there is such a beautiful spot so near Edinburgh.

The margin of the polices is richly wooded. In these woods there are lovely walks, shaded by beech plane, and other trees of stately proportions. The park contains a great variety of trees, many of them nearly two hundred years old. Behind the house there is a beautiful lawn, partly sloping and partly level, on which there are a great variety of flowering plants laid down in parterres. Here is a choice spot for lawn tennis, croquet, and bowls, and one could in imagination draw a fascinating picture of afternoon teas beneath the shade of the adjoining trees. Nearby too, there is a nice little sheet of water, which with extension, might be utilized for boating. In winter it would make an ideal curling pond. There indeed, is no end to the possibilities for recreative purposes to which the estate might be turned. In viewing the estate one could not but be struck by its suitableness for holidaymakers. To hundreds and thousands of the Edinburgh public it would be a delight to wander through the leafy woods or disport themselves in the polices finding health and recreation almost at their own doors, and at very little expense.

And if, in addition, facilities are provided – as the company intend – for the practice of every variety of popular game such as golf, cricket,cycling, lawn tennis, bowling, skittles and curling, the advantage to people with small means of enjoyment elsewhere will be immeasurably increased. It is proposed to offer ground facing the public roads which bound the property for feuing purposes, and as there is both sand and whinstone in the estate building will thus be facilitated.

Golf courses are springing up with almost mushroom like rapidity around Edinburgh, and the company are acting wisely in making their proposed golf course the chief feature of the scheme. How the new course will be made available for players is a matter for after consideration, but meanwhile it may be stated that the company propose keeping the management of the course in their own hands.   They will employ a competent greenkeeper, who will keep the course in such order as will satisfy all good golfers. The mansion-house will be converted into a clubhouse, so that intending members may reckon upon enjoying all the facilities which membership of a club conveys. It is intended to employ Peter Lees to lay out the course. Of the turf in the parks he speaks highly, and has no hesitation in saying – and indeed, has long held the opinion – that the Cammo Polices will make splendid golfing ground. The course will begin in the field opposite the hotel, a strip of which, 120 yards in width, has been acquired for the purpose, as has been stated, of bringing the course to the proximity of the hotel. The first tee and the home hole will be but a stone throw from the hotel. The line of play from the first tee will be Westwards, and as the strip of ground is about 700 yards in length, there is sufficient room here for four holes – the first two outgoing and the last two incoming. After playing the second hole the golfer will cross a road and enter the policies proper. Here in the North and South parks there is ample room for the remaining fourteen holes. The turf in the policies is very old, and the ground is diversified and undulating in character. As the home hole will be opposite the hotel it is intended to provide box accommodation in the premises. With this adjunct of a golf course the hotel will be an ideal place for a golfing holiday. The apartments are handsomely furnished, being beautifully fresh and well lighted. This fine hotel is proving a great advantage to visitors, and not least to the thousands of cyclists who frequent the Queensferry road. It would seem, indeed, as if a cycling ride to the hotel and afternoon tea were becoming one of the fashionable pastimes of the West End.”

Nothing more was heard of the development, and some four years later the company was liquidated.

“The First Division of the Court of Session today granted the prayer of a petition by Barnton Hotel Company, Limited, to proceed with the liquidation of the company under the supervision of the court. The Company was formed in February1896, with the nominal capital of £6000, and commenced business as Hotelkeepers at the Barnton Hotel, Cramond Brig, but the petition stated that the business had all along been carried on at a loss, and that no dividend had ever been paid. At a meeting last May it was agreed to wind up the company voluntarily, and Mr C S Romanes, CA, Edinburgh, was appointed liquidator.”

The interesting finale to this is that within seven years of this failure, Cramond Brig Golf Club was opened, using most of the ground surrounding Cammo House envisaged by the Barnton Hotel Company.