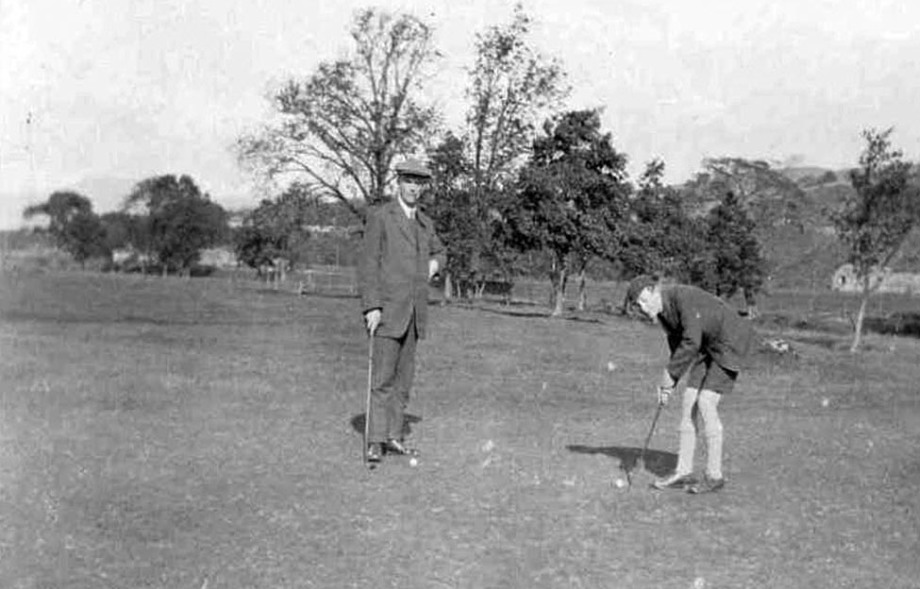 Ballinluig Golf Club.. “The club was formed a couple of years ago. The course, which consists of eighteen holes, is not a model one, whins being plentiful, and the putting greens peculiar.”   (Golfing Annual 1887-1888)

This meant the club was formed in, or before, 1886

“The course is not a model one, whins being plentiful, and the putting greens peculiar.”   (Golfing Annual 1897-1898)

"The recently laid out golf course at Ballinluig, one of the popular Perthshire summer visiting resorts on the Highland line, was formally opened on Saturday afternoon by the Rev. A. Meldrum, of Logierait Parish Church, in presence of a considerable attendance of ladies and gentlemen belonging to and residing in the district.

The course lies along the left bank of the Tummel, and the first teeing ground is close to the railway bridge on the Aberfeldy branch line.  It is a nine hole course, and affords plenty of sport, the present record for eighteen holes being 85.  In going to the first hole a bunker has to be cleared from the tee, and the approach requires to be accurate, as furze traps the ball to the right.  A fence is the only hazard to the second hole, and the third has its difficulty in a sloping green.  Between the teeing ground and the fourth green there is a seventy yard broad dry river channel, but a full iron stroke is all that is necessary to reach the green.  The fifth and sixth holes are very long, and owing to the prevalence of grass covered mounds bad lies are common. The dry river bed has again to be crossed going to the seventh hole, this time with a full drive; and the eighth hole requires a long drive to carry a wire fence.  A bunker has to be negotiated from the tee going to the ninth hole.  The greens are all in capital order.

The Rev. A. Meldrum, in opening the course, remarked upon the beauties of the Ballinluig district for visitors, and to its growing popularity as a summer resort.  In order to still further add to its popularity, the golf course had been opened on land owned by the Duke of Atholl, who had willingly granted the use of the ground.  To Mr D.S.Grant belonged the chief credit of having originated the Ballinluig Club,when already had." 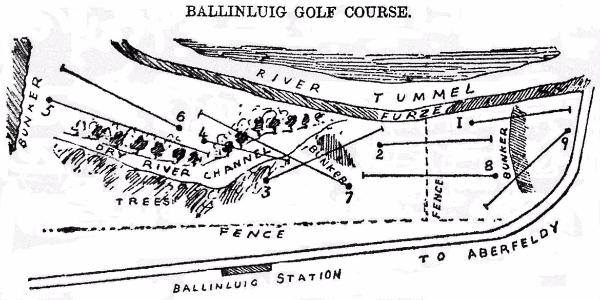 “The Ballinluig course is a nine hole one of unusual interest for an inland green. Natural sandy turf, holes averaging 190 to 350 yards. It lies along the left bank of the Tummel, and the first teeing-ground is close to the railway bridge over the Tummel for Aberfeldy branch line. For the first hole a good straight drive will clear the bunker, and if followed by a fair brassey, should reach the edge of the green, making a 4 possible, though 5 is par play. The only hazard for the second hole is a wire fence, which should be cleared off the tee. The third hole will require very accurate play for the second stroke, as it is guarded by a bunker on the right with rough ground in line of hole, and the green being on a slope 5 is more likely than 4. The fourth hole is very interesting, being simply an accurate iron shot over the dry river bed, the distance from bank to bank being about 70 yards, and to the hole 116, but very careful play is necessary, as the hole is guarded by a bunker behind and by trees and alders on left. The fifth and sixth holes are 346 and324 yards long respectively, and the only hazards for straight drivers are small grass-covered mounds, causing frequent bad lies, and a deep bunker to the left of No. 5.  A too full approach to No. 6 is also punished by a bunker and an old road. The wide hazard has again to be crossed for No. 7, this time with the play club, as the tee is back 70 yards from the brink. If clear, a good cleek shot will reach the green for the second. No. 8 requires a long carry off the tee to clear the fence, with a brassey and iron to reach the green, and on account of possible bad lies 5 is good enough. The ninth hole also requires a well-taken ball off the tee to carry a bunker midway, and the railway fence in front and the Tummel on the left make the approach hazardous. The course is to be extended and improved this season. The first teeing-ground is about 400 yards from station (Ballinluig, Highland Railway). There is a good hotel at Logierait, half a mile from course. Lodgings with board, or apartments with attendance, can be had in the village of Ballinluig. 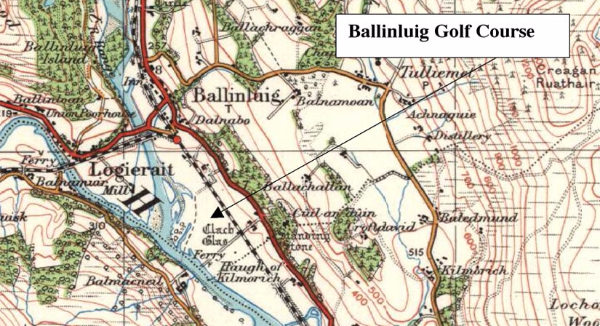 “The Ballinluig course is in such a state with long grass that play has become practically impossible, and steps have been taken to have this rectified. Failing a successful issue, this once flourishing club must wind up, as it is impossible to maintain the course without the support of visitors, and its unplayable condition for the past few years disgusted visitors who wished to engage in the game, so that the entire club is now dependent upon a few local men. The course is one of the finest inland sporting grounds in Perthshire, and its discontinuance will seriously affect the large number dependent in a great measure on house letting. The Club’s recent success in securing the Stroyan Cup trophy, open to West Perthshire, shows that several golfers of the right kind have been trained on this excellent course, which is still good if the club had the right to keep the grass short, so as to allow play during the visitor season.”    (Golfing 6.7.03)

“When the golf club was first instituted in 1896 the membership exceeded 60, but with the yearly difficulties, mainly connected with the insufficient grazing of the course, the membership has fallen to about a dozen..”    (Perthshire Advertiser 14.2.1906)

“A meeting in connection with the restart of golf in the Middle District of Atholl was held at Ballinluig of Friday evening. Office-bearers for the coming season were elected. It was decided to have the course prepared for play without delay, and a Special Working Committee to see to re-clearance of the ground was appointed. Membership fees were fixed at 5s and 2/6d for ladies, Visitors tariff was also prepared. It is now eagerly hoped that golf will become an attractive pastime for residents in the district, and that the course will be in good order during the visitors’ season.”

"The course is situated on the left bank of the River Tummel (extending from Aberfeldy railway bridge over this stream) to its junction with the River Tay.  Situated as it is at the opening of both the Tay and Tummel valleys, it commands a range of scenery unsurpassed in the Highlands of Perth shire for beauty and charming variety of nature.  The winding of the rivers, the rich vales, the sloping cornfields and pastures, the hanging woodlands, and the mountains in the distance form one of the noblest landscapes for extent, variety, beauty and grandeur that the eye can behold, and the combination of vale and hill, wood and water, cliff and cascade, exquisite culture and sublime desolation beautifully illustrated from the golf course greatly adds to its charm.  The 9 holes are all especially interesting and the turf is excellent.  Hazards are naturally numerous and consist of dry channel of river, hedged, palings, trees and grass-covered mounds.  The difficulties with grassing tenants in recent years have been surmounted, and the course is in good order during the entire year.  A supreme effort is being arranged for further extensive improvements, and for the coming season the course is likely to prove more attractive than ever.  W A MacIntosh Hon Sec"

Closed with the onset of WW 2.