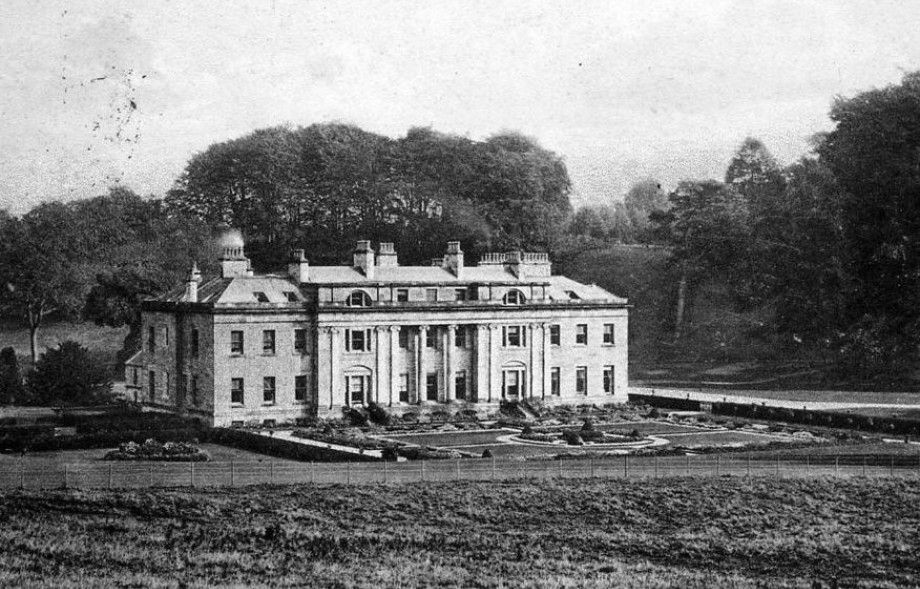 "We understand that negotiations are on foot to secure a park to be used as a golf course for the district." (Fife Free Press, 22.8.1905)

"We understand that the rent to be paid to the tenant for the golf course has been fixed. Mr Patrick, of the Lundin Links golf club, made an inspection of the proposed course, along with the committee on Wednesday night and advised as to the laying out of the ground to the best advantage." (Fife Free Press, 9.9.1905)

"The preliminaries being now arranged, a meeting is to be called on an evening next week to formally constitute the club, adopt rules, and appoint office bearers.

One enterprising tradesman has already taken time by the forelock, and is showing a selection of cleeks and golf balls in anticipation of the coming boom." (Fife Free Press, 16.9.1905)

"A public meeting in connection with the proposed golf club was held in the Smaller Town Hall last week – Provost Dixon presiding. The committee reported that they had gone over the ground along with Mr D. Patrick , Lundin Links, who had fixed the position of the holes, and expressed the opinion that the ground would make an ideal golf course.  A seven years lease of the park had bean arranged, at an annual rental of £10.  Fee’s were fixed and a draft constitution and bye laws agreed to.  Mr E Balfour of Barbirnie was elected hon. President:  Provost Dickson, Capt: Mr R Ballingal, vice captain: Mr D Robertson, Solicitor, secretary and treasurer: Messrs J S Allan, D G Coull, J Guthrie, D Simpson, J Baldie, and D Paton, members of committee.  The course is expected to be ready for play by the end of October.  Already about sixty have signified their intention of becoming members." (Leven Advertiser, 28.9.1905) 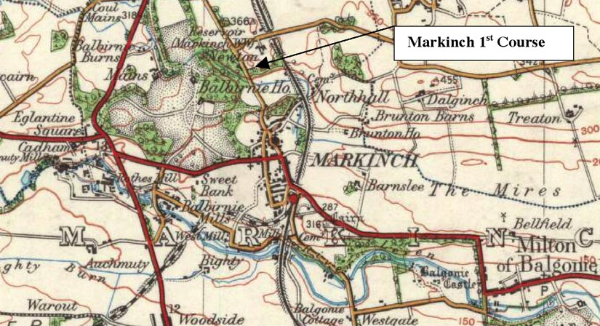 “A new golf course at Markinch was opened yesterday by Mr Edward Balfour of Balbirnie.  It is admirably and conveniently situated in the Burn Park, or Playfield as it was known for hundreds of years, on Newton Farm to the north of Markinch Hill, ten minutes from the station., and the ground has been secured at very reasonable terms, while the initial expense and cost of maintenance will be comparatively small. The burn which runs through the links has to be crossed half a dozen times, making a splendid hazard for topped tee shots. The first hole is plain sailing save that a sliced tee shot faces sever penalty in the hedgerows.  The second hole, though short, is most trickily situated behind a hillock, and affords excellent sport.  Marshes skirt the fairway to the third and fourth greens, and the burn is meantime the only hazard to the next three holes.  At the eighth a good drive is required to carry the stream, the green being on high ground in the north west corner, while sliced strokes to the home green will pay the penalty of going out of bounds.” (Glasgow Evening Times, 13.10.1905) 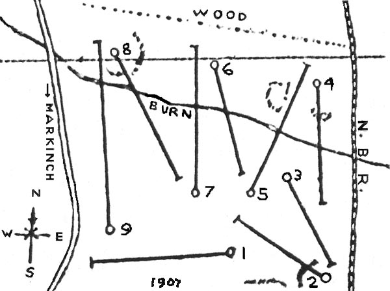 “The ground is scarcely large enough for a golf course but the Officials have made the most of the area at their disposal, and the Back Burn, which runs through the centre, affords sport to the hearts' content of players.  Mr Edward Balfour of Balbirnie has been President since the club's formation and has presented medals for Scratch and Handicap competition.  There are as many as 114 gentlemen and 87 lady members, the subscription for gentlemen being 10s a year and for ladies 5s.  Mixed foursomes are particularly popular.  The amateur record is 70 by the Rev D S Mackenzie"(MIE).

“The course is a short, flat one, but very sporting. There are no bunkers, but a burn runs through the course, which amply makes up for the lack of bunkers. It is inclined to be heavy in wet weather. 2,177 Yards, Par 68(18), SSS 66. Amateur record 63, Professional record 62.

“The Markinch Golf Club was formed in 1905, with Col Edward Balfour of Balbirnie as its first captain. The course was situated to the north of the town, bounded on the west by the B911 Markinch to Kennoway road, and on the east by the main Edinburgh to Dundee railway line. It was of 9 holes with a par of 68.

Col Balfour presented to the club- The Balbirnie Scatch Trophy, a Feathered Ball enclosed in a silver cupola- the ball being made by Thomas Alexander of Musselburgh around 1835, and the trophy is at present valued at £2000. He also presented The Handicap Trophy – a solid silver tray. The Ballingall Cup was presented for the competition by the ladies of the club by Neill Ballingall the Factor for the estate at the time. The Webster Medal, Simpson Medal and the Reid Cup were presented by well-known worthies of that time, all of whom captained the club in its formative years. The club subscriptions when formed was 7/6d for gents and 5/- for ladies. Markinch was a member of the Fife and Kinross 9 hole league, whose championship it hosted in 1927, and remained at its original location until 1947.

The course having been occupied by searchlights and ack-ack batteries during the war 1939-1945 was badly damaged by these heavy vehicles. Although the Club was reformed under the captaincy of Charles Bowden, insufficient monies were available to repair this damage, and the Club folded up in 1947. The trophies were placed in the vaults of the local bank and remained there until 1976 when a public meeting was called, and the Club resuscitated.

Discussions with GDC resulted in the Markinch Golf Club agreeing to lease the course for 99 years. This was granted on the understanding that the Club build a clubhouse in keeping with the golfing amenities.

This was agreed and the course (the first 9 holes) was opened for play in April 1983. The second 9 holes were completed the following year and the club was renamed Balbirnie Park Golf Club. (FGA)