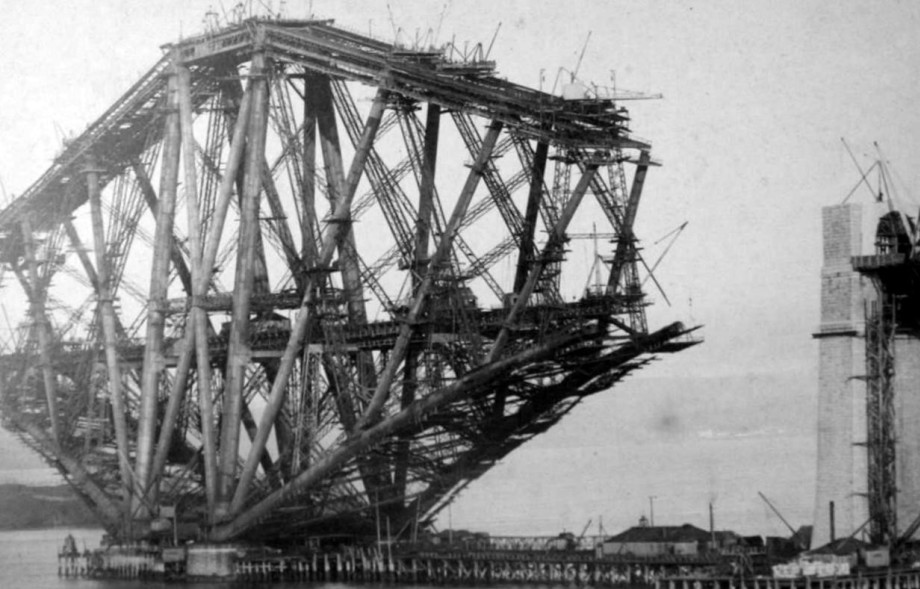 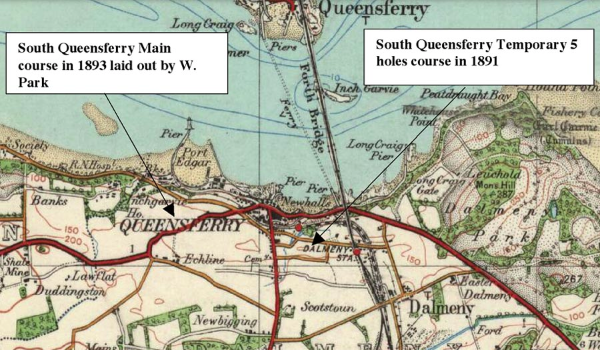 Proposed golf club for the Ferry

"On Monday a meeting was called by public intimation for all those interested in the game of golf to attend in the Town’s chambers.  There was a good and representative attendance, and Dr Miller Semple was called upon to preside.  The meeting agreed that a golf club be inaugurated at South Queensferry.

A committee of five was appointed to arrange all preliminaries as to obtaining a suitable course of nine holes.  A field of 34 acres or thereby, which the promoters have in view is all but conceded. The nucleus of this new attraction for South Queensferry both as a summer and winter resort was at once guaranteed at £47 by intending members present, the annual subscription being spoken of as at one guinea.

The meeting was harmonious and unanimous as regards the object aimed at. There will be another meeting to make the club an established institution"

“It was reported that as the proposed course would not be playable till May 1892, it was agreed to open the club by playing on the field between Station Road and the Hospital Road, and an arrangement had been made with the farmer.  It was explained that the temporary course would be of 5 holes only, but would be suitable for beginning play."   (WLC  18.7.1891)

"The first meeting of the club was held in the Council Chambers on Tuesday night.  The committee appointed at a former meeting reported that the proposed course not being playable till May of next year at the earliest they had agreed to open the club by playing on the field between the Station Road and the Hospital Road, and an arrangement regarding which had been made with the tenant.  Dr Semple explained that the temporary course would be one of five holes only, but would be suitable for beginning play.

The following, with the President and Captain for the year, were appointed a committee. viz- Vice president Dr Semple; treasurer, Mr Jas. Gillespie; interim Secretary, Mr A. Morison; and Bailie Fairlie and Mr D. Stewart, members of committeee.

It was agreed that the general meetings of the club be held on the first Thursday in June.  It may be stated that steps will at once be taken to prepare the greens,&c. so that play may be commenced on an early date."

"The golf club has now got into thorough working order, green-keeper appointed, &c.  the short distance form Edinburgh by train should be a source of enjoyment to many who are fond of this game.

The popularity of golf is on the increase, and those in and around Queensferry wishing to indulge in it are to be congratulated on the good start the club has made"   (WLC 1.8.1891).

"Since the commencement of regular play on the temporary course of the Queensferry Golf Club, the efforts to get the greens into something like playable condition have been fairly successful, though the ground, limited as it is in extent, may not be perhaps adapted in the highest degree to the exhibition of the finest play.  It is gratifying to know that there is a good membership and that the same is increasing.

A suitable wooden erection has been secured and placed on the ground to service in the meantime as a clubhouse.  Every afternoon, if the weather be at all favourable, sees some of the members having a round, and ladies are not unknown on the course."   (WLC 5.9.1891)

“A meeting of the Golf club held on Thursday night in the Council Chambers was well attended.  The business was in connection with taking off the new course at the west end.  The captaincy of the club was played for on Friday afternoon"   (WLC 17.10.1891).

“The Queensferry Golf Club, which has just been formed, held their match for the captaincy of Saturday afternoon. The weather was anything but favourable, smart showers coning down at intervals, while the course, owing to the recent storm, was not in condition for good scoring. After two rounds it was found that Mr W Wright, watchmaker, had the best score to his credit. The nearest runners-up were Mr J Gillespie, Bankhouse; Rev J B Keir, UP Manse; Dr Semple, Queensferry; Mr C Durie, and Dr Bentley, Kirkliston.”   (GH 18.10.1891)

It is interesting to note that this small club should follow the ancient practice of the captain being the champion golfer, having won the honour in tournament.

"On Thursday last Mr W. Park, junr; Musselburgh, visited Queensferry and went over the new golf course with a view to the laying out of the holes.  Mr Park was well pleased with the ground, and was of opinion that the course would be a good one." 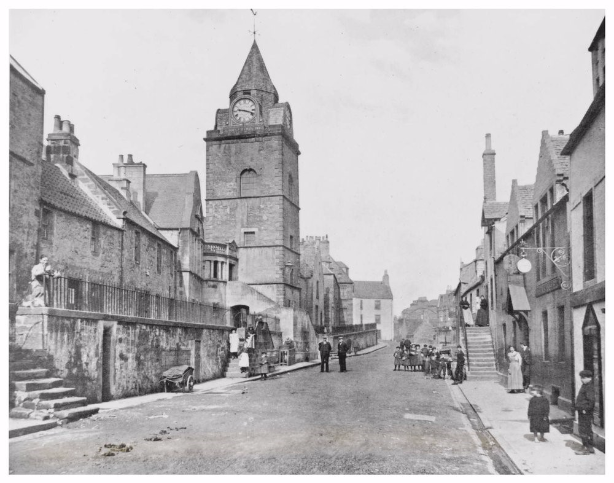 “The new course is situated on the rising ground to the south of the town and west of Dalmeny station. The course, which was laid out some time ago by Willie Park, of Musselburgh, is of an undulating nature, not too steep to make walking tiring, yet sufficiently so to lend variety to the play. Thee are few natural hazards, but small mounds or turf dykes have been made here and there which will doubtless on many occasions prove pitfalls for the erratic player.

The new course is situated on the rising ground to the south of the town and west of Dalmeny station. The course, which was laid out some time ago by Willie Park, of Musselburgh, is of an undulating nature, not too steep to make walking tiring, yet sufficiently so to lend variety to the play. Thee are few natural hazards, but small mounds or turf dykes have been made here and there which will doubtless on many occasions prove pitfalls for the erratic player. There are nine holes. The first, which is of considerable length, runs along the northern slope of the hill with the public road and a piece of rough ground to the right, while to the left and also in front of the green are hazards which may prove disastrous to a low ball. The second is a short hole from the low ground rising along the face of the slope to the level ground above, and will be found comparatively easy. No 3 is also a short hole, but with two hazards almost in line. Careful negotiation will be required here. 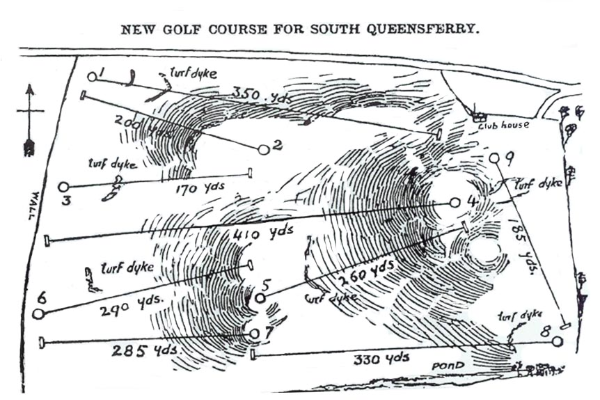 At the fourth, which is the longest hole on the course, the player has no hazard to contend with unless the driving be much out of line. Nevertheless, there is rising ground in front of the green which is situated on the top of the hill, and there is the possibility, too, of the ball rolling down the other side should the green be passed. The hole may be found one of the most difficult on the course. The fifth hole is comparatively level, but with a hazard in front, and the green on a narrow eminence, careful approaching will be necessary. The drive to the sixth hole is down a steep slope, and as there is no hazard of consequence in the way, straight play should make it a very easy one. Play to the seventh hole is in the opposite direction to that of the preceding. The hole will be a little more difficult as the hill has to be climbed and the green is on the narrow eminence near the sixth green. Hole No 8 is of considerable length, with a hazard to the left and a nice receptacle for balls in the shape of a small loch on the right, while still another hazard appears in front of the green. The hole will require careful piloting. The last hole of the round is short and should be easily negotiated, the only obstacle being a small hazard, which a fair drive should easily carry. The turf, although quite new, shows signs of becoming at no distant date all that could be desired of a golf course.; while the putting greens, which are already in fair condition, may, with the careful attention they are receiving, be expected shortly to equal many of those on older courses. The club, to which a considerable number of members have already been admitted, has been started under very favourable auspices, Mr Russell of Dundas Castle being president, with the Earls of Roseberry and Hopetoun as members. Being within ten minutes walk of Dalmeny Station, which is only twenty-five minutes from the Waverley, doubtless this course will soon become one of the favourite resorts of Edinburgh golfers who may be fortunate enough to gain admission to the club.”   (EED 4.5.1893)

“This new course was laid out last year by Willie Park Jnr and has some capital hazards.  It is only ten minutes walk from Dalmeny station.”   (GGGGS 1894)