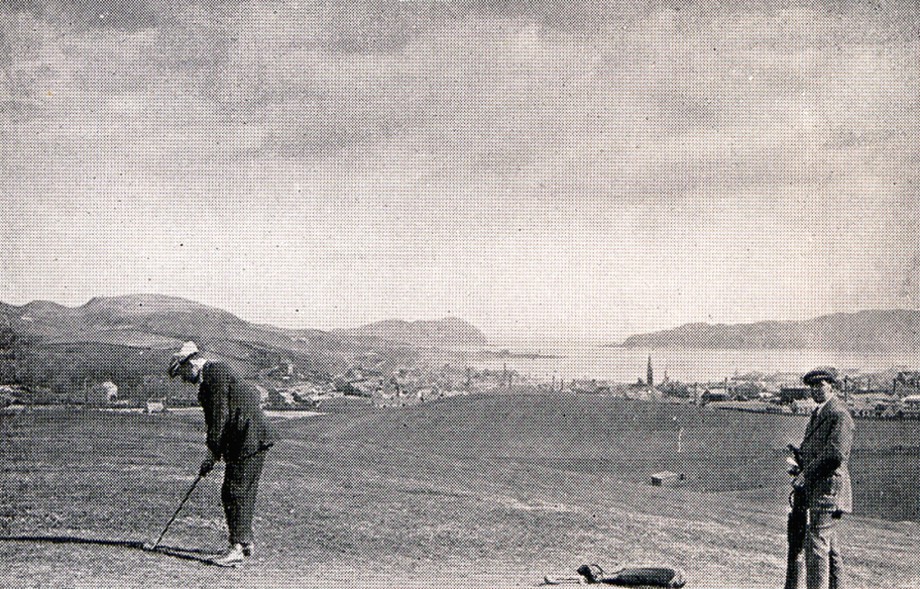 The elevated course overlooking the town and the bay 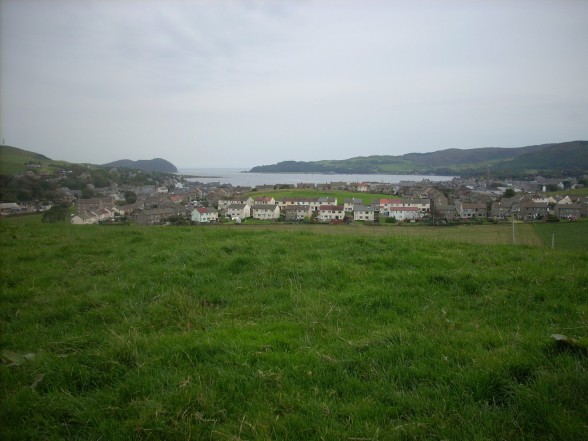 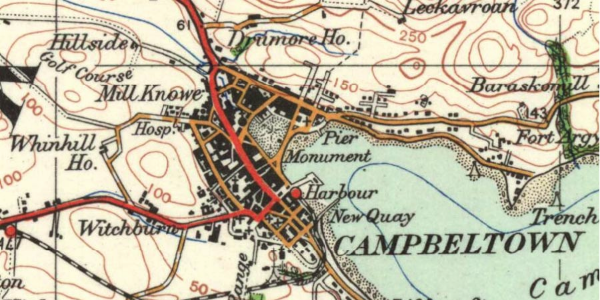 The Opening of the course

Laid out 1912. “On Saturday last the Municipal golf course, which lies on the hill between Hillside Farm and Gortchen, was formally opened for play with fitting ceremony, and the event undoubtedly marked an important forward step in Municipal enterprise. The interest manifested in the occasion by the townspeople was entirely satisfactory, as there would probably be six or seven hundred people assembled for the opening function, and a p[leasing feature of the opening ceremony was performed on the ninth green. Mr Duncan Colville Jnr, Convenor of the Golf Committee said that before he called on Provost McMurchy to open the course he would like to say a few things about the course. It was exactly six weeks to the day that the first turf was cut, and in view of that fact he hoped that their criticism would be somewhat lenient whey they walked round and formed their impressions. They hoped to effect further improvements by and by when they saw what support the course received.If it proved too small then they would lengthen it. The Provost then drove a ball from the first tee, and his excellent stroke was greeted with very hearty applause.

Near to the starting point a commodious pavilion has been erected, which comprises ladies’ cloakroom and shelter, gentlemen’s cloakroom and shelter, and greenkeeper’s workshop and toolhouse. Facilities have also been provided to enable the greenkeeper in his spare time to effect repairs to golf clubs, and it is hoped that this arrangement will prove a convenience to players.

The course has been laid out with a view to economy in capital expenditure, in other words the putting greens are all natural turf. A liberal amount of rolling and cutting, aided by intermittent rain, has rendered the putting greens playable in a much shorter time than might have been anticipated. The teeing-grounds, too, are mostly natural, although it has been found necessary to construct them artificially at the fourth, sixth and seventh holes. It is not intended to construct bunkers until next winter, by which time a better idea will have been formed as to the best plan for re-arranging the holes in order to lengthen the course.

From the first tee the line of play lies westward up a steep incline, a good drive being necessary to clear the fence and ditch fronting the tee, and there still remains a tricky uphill approach shot, as the putting green is on a sort of plateau; the hole is 250 yards long, and a five represents fair golf. The second hole, 210 yards long, should be an easy four, and third hole, at 110 yards is the shortest on the course and should be taken in three. Both the greens are practically level, but straight driving is necessary, other wise the ball is liable to run down the slope of the hill. The fourth hole is likely to prove a favourite, the view from the tee towards Machrihanish Bay being specially attractive, and the green lies some 370 yards down the long slope to the Gortchen. The putting green on this hole is perhaps in the finest condition of any on the entire course at present, and the hole should be taken in five. At the fifth hole, 215 yards, the player once more breasts the hill, and a sliced shot here is almost certain to go out of bounds, but should not be dissatisfied with a four. The sixth hole, 233 yards, is an easy five, and the seventh, 125 yards is an easy four or possible three, and both afford more scope for erratic play, long grass being the chief hazard. The eighth, 315 yards along the side of the hill is rendered difficult owing to the considerable slope of the putting green; fives will be more common than fours here. From the last tee the green lies below, close to the pavilion some 320 yards away. The approach has to carry over a road and fence. Ordinary play should produce a fairly easy five. Beyond this putting green a wire-netting fence fifty yards long by six feet high has been erected to prevent balls finding their way into the cornfield out of bounds, while a similar precaution has been taken beyond the fourth and seventh greens.

Copies of the bye-laws have been placed in the pavilion, and players are advised to study them well and so ensure the smooth working of the arrangements made for their comfort and safety.” 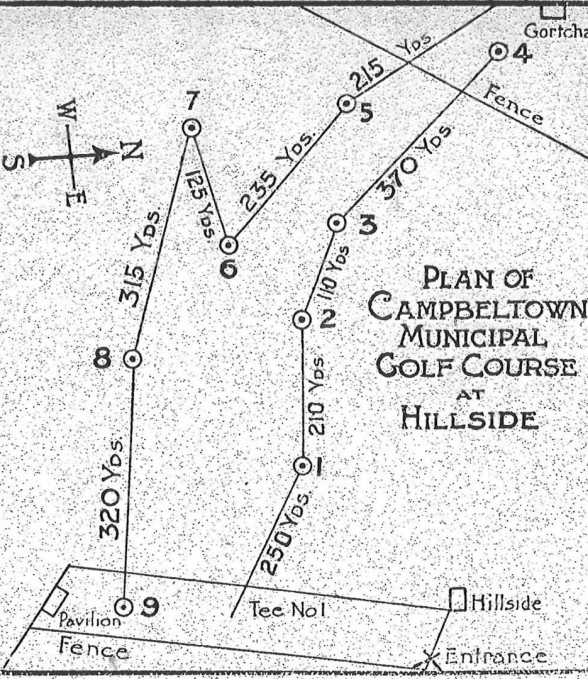 Hillside layout. The 1st tee and 9th green are on the low ground. If you look carefully at the header photo at the top of the page, then you will see the small pavilion at the foot of the hill.

“Mr Duncan Colville Jnr Moved that the Council ask for power to  borrow £200 for the golf course to meet capital expenditure. The amount that had been expended to date was£160, about £40 below the original estimate, but various other contingencies would necessitate further expenditure. Foe example, a number of players had asked that boxes should be provided in the pavilion for the storage of golf clubs so that they would not require to carry the clubs back and forth. A rent of perhaps 2/- per year might be charged for the use of these boxes. It was customary to provide facilities of that kind on golf courses, and the cost of construction of 50 boxes would probably cost around £20, but from that outlay there would be an annual income from rent. The capital sum they intended to borrow would be taken on the usual terms, viz 31/2% for a period of 14 years, or for shorter periods if that was found desirable. Continuing, Mr Colville said that at present everything pointed to the success of the course. They had sold 538 tickets in the first eight days, apart from the annual subscribers, and if that patronage was maintained success was assured. So far as he could see they would be able to pay off the loan in considerably less time than fourteen years.

In reply to Bailie Brown, Mr Colville said they had the promise of 330 annual subscribers of whom, so far, 130 had taken out tickets. Within the next week or so they intended to remind those who had not come forward of their obligation. Mr Weir asked if Bailie Brown had taken out his ticket yet, to which Bailie Brown replied “Not yet.” (Laughter) 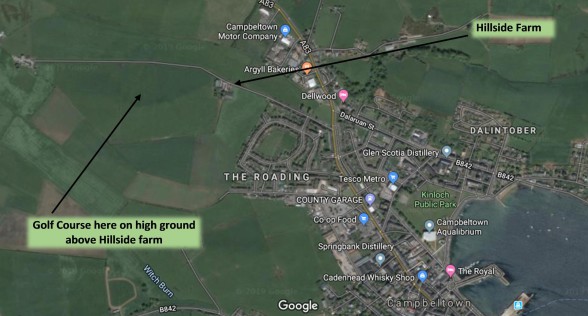 “The golfing enthusiasm  of the ticket holders of the Municipal golf course has been kept up to a very high pitch throughout the winter, and now added interest and zest have been added to the new season by. the inauguration of the first public competition held on the course. Mr Samuel Greenlees, London, has very kindly offered to provide two gold watches as prizes. The Committee has now drawn up the conditions of the competition, which is restricted to ticket holders; between 16th April and 3rd May any annual member may hand in to the greenkeeper any number of scores for the nine holes. Special scoring cards will be handed out by the greenkeeper and these must be returned on completion of the round, signed by the competitor and by his or her partner. After 3rd May, the Committee will select the best eight players having the best eight scores and will ballot them for partners, the remaining rounds to be matchplay knockout.”

Closed in 1940, one of the main reasons being shortage of golf balls.