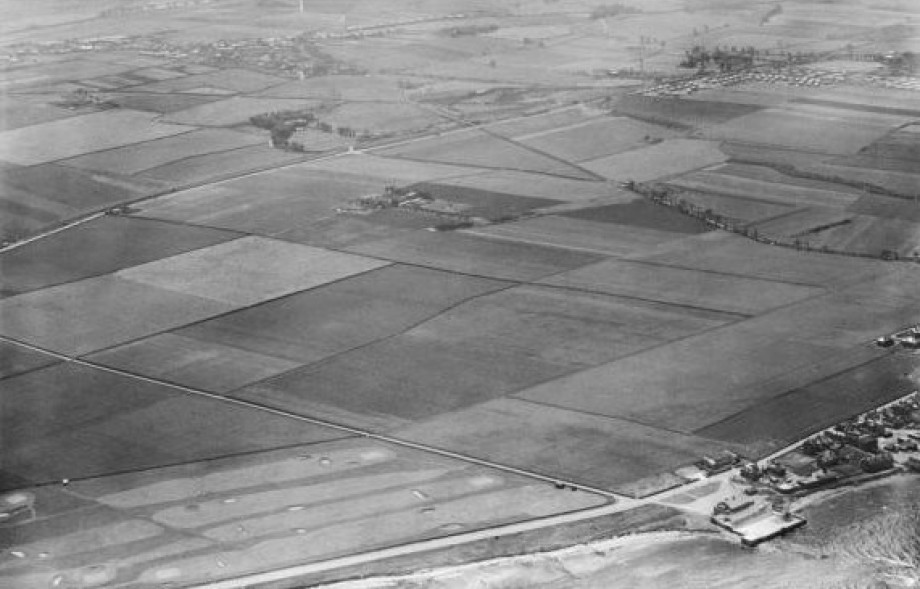 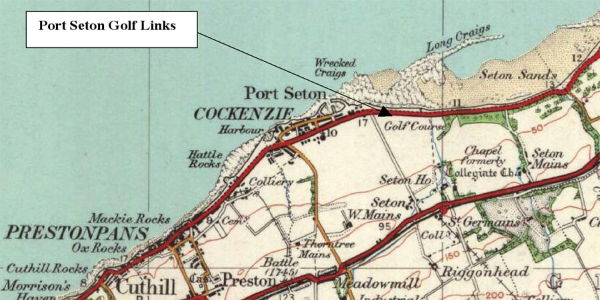 Port Seton and Cockenzie Golf Club.  First mention 1912.  A 9-hole course laid out in the Park.  Members have bandstand as a clubhouse. “An event in which the inhabitants of Cockenzie and Port Seton showed their interest by turning out in large numbers to witness the opening on Saturday by Lady Wemyss of the new course at Cockenzie. Situated on the right hand side of the main road leading from Prestonpans to Gullane, the course consists of eighteen holes of distance varying from 170 to 500 yards, and aggregating just over 6,000 yards. 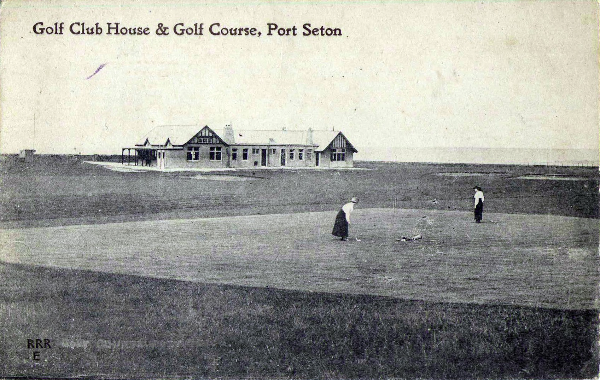 With the exception of a small portion which has lain in permanent pasture for years, the ground has been sown down, and now bears a fine coating of grass, which only requires to be played over for some time in order to bring it into first class condition for golfing purposes. At the opening ceremony Mr H.B. Cadell, W.S. Edinburgh, chairman of the directors of the company responsible for the venture, said they had secured the ground on suitable terms from Lord Wemyss, and he did not doubt that in view of it’s fine situation the course in the hands of the club which had been formed would prove an attraction not only to the inhabitants and visitors in the neighborhood, but to golfers further afield.

Colonel Cadell, Captain of the club, thereafter introduced Lady Wemyss, and presented her with a club that she might strike the first ball, this, Lady Wemyss did, the ball, to borrow Masonic language, being “ Well and truly laid” along the course.

Provost Wilson, Cockenzie, proposed a vote of thanks to Lady Wemyss, and called upon the company to give three cheers. These were cordially raised.

Thereafter Lady Wemyss, with B. Sayers as her partner, played a foursome with Miss E.Grant Suttie, the ex lady champion, who was partnered by Davie Grant. Though Lady Wemyss played well throughout, she and Sayers were barely strong enough for Miss Grant Suttie and her partner, who won the match by 5up and 4 to play.”  (S 8.7.1912)

This course is now in good playing order. One hundred Members will be admitted without Entry Money. Port Seton is ten miles from Edinburgh, and the starting-place is immediately at the terminus of the Musselburgh tramways. Reduced Tramway Fare to Members of the Club. A Clubhouse is in the course of erection, and will be ready for occupation immediately. Daily visitors admitted in payment of 1s to Greenkeeper. 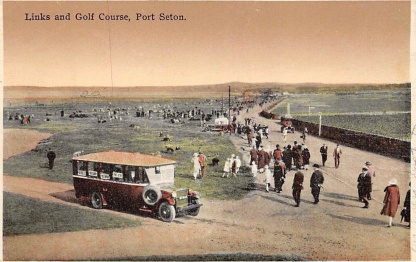 The course is beyond the wall in the right hand of the postcard.right of Wall.

“At the close of the day of the Professional Tournament at Port Seaton, the prizes were awarded as follows :-

Colonel Cadell, V.C., C.B. Cockenzie, presented the prizes at the close, and J.H. Taylor returned thanks on behalf of the professionals and wished the club success.”

“Port Seaton and Cockenzie Town Council are considering a proposal that they should take over control of Port Seaton golf course. The course extends to 38 acres, and the present lease expires at Martinmas 1938. At a recent special meeting of the Council it was intimated by the Port Seaton Golf Course Company Ltd that they intended to give up their interest in the course, and to offer back the land to the proprietors, who, in turn, had expressed their willingness to hand it over the course, free of charge, to the Council if they so desired. The Council. However. Considered that it would not be in the best interests of the burgh to take over the course unless a lease over a long period was obtained. Negotiations are now proceeding regarding the matter, and also as to the proposed rent,” (11.12.1935)

“Port Seton may soon lose its golf course. The local golf club some time age asked the Port Seton and Cockenzie Town Council to take over the control of the course, and the Council have been in communication with the proprietors of the ground. At last night’s meeting of the Town Council, the Rev T Osborne reported upon a meeting which a deputation from the Council had had with agents for the proprietors. He said that the proprietors were prepared to sell the ground, which extended over 38 acres, at a cost of £150 per acre, the total cost to the burgh being in the region of£5700. There was also an important condition which stipulated that the Council must at no time build upon it. He agreed that a golf course was a great asset to any burgh, but taking everything into consideration, it was going to be a most expensive piece of ground for the ratepayers, and under the circumstances he could not recommend the Town council to make the purchase.” (S14.12.1937)