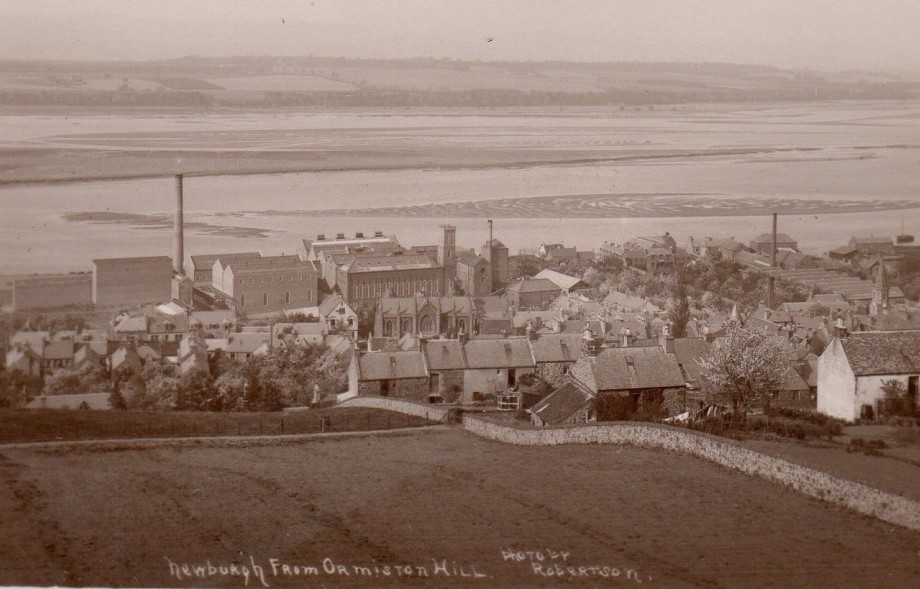 Newburgh Golf Club. Founded 1905.  A 9-hole course at the West End, on the low ground immediately  to the south of the station.

Mr Logan, who was called on to state what had been done in the way of forming a club, procuring a course &c, explained that the failure last year to to procure a course, necessitated the temporary suspension of the formation of a club then, but that the interest in golf was as great, if not greater, than ever, and that the gentlemen interested in the formation of a club had no fear as to the result of their efforts. The ground looked at for the formation of a course is said to be an ideal one, requiring little, if any, laying out which would reduce initial expenses very much, and, as the rent was very cheap, this would enable them to make the entrance money and fees low. After some discussion as to the ways and means, the following gentlemen were appointed a committee to make the necessary arrangements and report to another meeting:- Mr Morison, Banker; Mr Greig, Mr Anderson, Solicitor; Mr Logan, Grocer; Mr Goodwillie, Accountant; and Mr Nisbet Robertson."

"Ex-Provost Anderson presided at a meeting held in the public hall last Wednesday night in connection with the formation of a golf club. The report of the delegates appointed at last meeting was submitted and considered very satisfactory. Over sixty names have already been handed in as likely members. The following gentlemen were appointed a provisional committee to make all necessary arrangements. Chairman, Ex-Provost Anderson; Secretary, Mr William Grogan, Grocer; Treasurer, Mr Anderson, Solicitor; Committee, Messrs Morison, Banker ; Greig, Manager; Gifford, Grocer; and Goodwillie, Accountant." (PA 27.9.1905)

A handsome silver handicap medal is being prepared by Messrs Hamilton & Inches, Edinburgh, for the club." (PA 1.11.1905)

"Among the most recent new courses is that on the estate of Mugdrum, at Newburgh.  It is a nine holes course, and is so situated that the player has the somewhat unusual experience of driving from one county into another – eight of the holes, according to the plan, being in Fifeshire, and one in Perthshire.  Apart from the satisfaction of driving over the boundary and yet not out of bounds, the golfer will feel happy as his ball soars over the burns and the dykes encountered in the course of the round.  Here and there the rough places will require to be made smooth, but with it’s commanding views of the straths of Tay and Earn the course out to become popular.  The chief patron of the club is Mr Charles Anderson, Fettykill, a name well known in golfing circles.”  (S 14.11.1905)

"Play has commenced on the new nine-hole course at Newburgh, though the formal opening is not expected to take place until after the new year. The course, the turf of which has all the advantages of fine old pasture, is situated on the crest of the hillto the West of the Black Cairn, on the Mugdrum Estate, commands a splendid view of the straths of the Tay and Earn, and will undoubtedly prove a great acquisition to the town, which is already a favourite summer resort. Satisfactory arrangements have been made with the tenant, Mr Todd, Ormiston, and with few difficulties in the way of green-making the expenses in maintenance will be comparatively small.

The first teeing ground is within a stone throw of the new railway station, which will be open for traffic within a few months.

Without artificial bunkers, the course possesses several natural hazards of a very sporting character, plantations, trees, railway, burn, and dyke all being encountered in the round. The holes are generally of fair average length, the longest being the seventh, which extends to 290 yards, while the shortest, the second, is only a cleek shot of 135 yards." (ET 15..12.1905)

Formal Opening.   "The new golf course was formally opened on Saturday with a friendly competition. There was a large turnout of members. Before playing off the first ball with Mr Wishart, Vice Captain, ex provost Anderson, Captain of the club, in a few words congratulated the committee on the success which had attended their efforts. Play was then commenced, when ten couples took part in a stroke competition, resulting in a win for the Vice Captain.

Mrs Anderson, Guthrie Lodge, provided tea, which was served in a marquee at the entrance to the course, in order to suit members unable to be present, the competition is to be continued to-day ( Wednesday )." (PA 28.3.1906)

"The golf club from the reports submitted at the annual meeting, continue to show steady progress. The season opens to-day with a match between sides led by the Captain, Dr MacMillan and the Vice-Captain, Mr D. Wishart, Abernethy. On the motion of the secretary, Mr Logan, it was decided to form a league among the club members, medals to be played for under existing handicap rules." (PA 10.4.1907)

“No artist could play golf here!" exclaimed the golfer with fine sensibilities as he took his eye off the little white ball to observe the scenic beauties surrounding this course — woody mountain, brown heath, and Silvery Tay — and duffed his shot in consequence.  Moreover, this course can lay undoubted claim to the original story that a golfer did lay down his bag of clubs to look for his ball, and when he had found the same, his clubs were lost in the thicket.  Hence the proverb — "A club in the hand is worth two in the bush!"  But we have changed all that!

Founded in 1905, the following were the Club officials:-  Captain, Provost Anderson; Vice Captain, D Wishart; Secretary, W Logan; and Treasurer, G L Anderson.  An admirable, low-ground 9-hole course, formally opened in March 1906, was marked out and laid down to the south of the new railway station.  During the intervening years this has been vastly improved. The most recent extension being two new and interesting holes, and now in its present condition Newburgh course can be thoroughly recommended  for excellent sport.

Only two other items of our traditional history fall to be added.  One golfer did indeed kill a sheep, which produced the following plaintive letter: "Just a note to say I had a sheep hit some days ago, and it died at the time.  the value of the sheep was £2 , but I will let the Golf Course off by paying £1, as it was done by some of the members at Golf."  Another hit a teed ball up in the air, which same ball descended in the close proximity of a tree.  Not finding the ball on the ground, the player did ascend the tree, where to his amazement he found it in  a nest full of eggs!  Whether it was playable or unplayable is a problem for the Rules of Golf Committee!