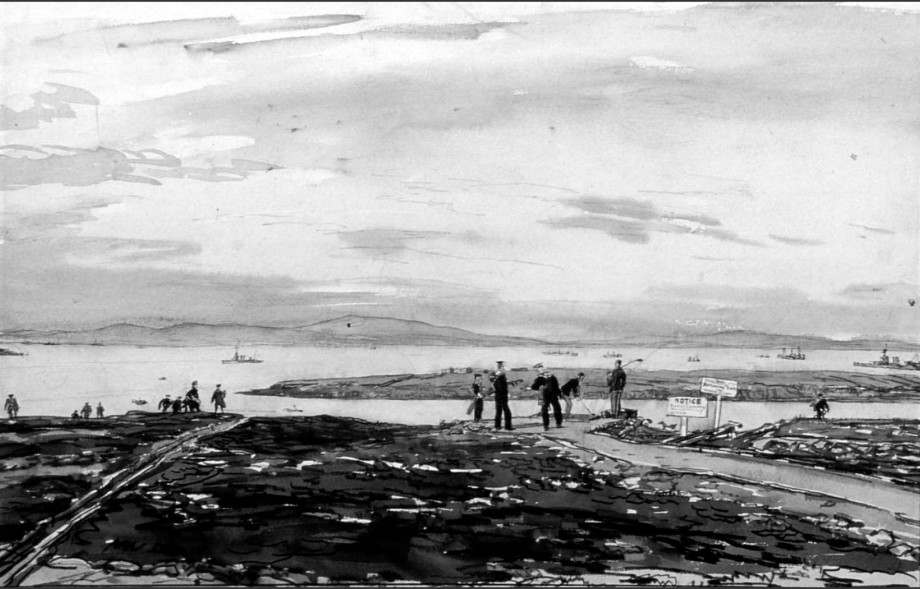 “Rear Admiral the Hon. Victor Stanley, in presenting a cup to Cramond  Brig Golf Club on behalf of the Grand Fleet, said “Golf had taken a very great hold on the navy of late years. He would not say whether it was very good, but what they lacked in quality they made up in quantity. He had heard that there was cheap golf at the Braid Hills, but when stationed at Scapa Flow the officers of the navy laid out a little course of sorts. They only allowed foursomes on it, and yet he had seen there as many as 34 balls waiting their turn for the start. Some money being required for the course, they asked each player to pay one shilling, and the first call brought in £84. That meant there were 1700 players, and for that shilling they played for three and a half years, which was cheaper even that that at the Braids.”

"The golf course was a joint creation of 18 holes, and each big ship undertook the design and construction of one hole. Great ingenuity and care were taken over the business, and one battleship is reputed to have spent £70 in getting turf for their green from a famous Scottish golf course. Either HMS Canada or HMS King George V was responsible for a wonderful green, standing as smooth as a billiard table amidst the encircling heather.”  (ANSD) 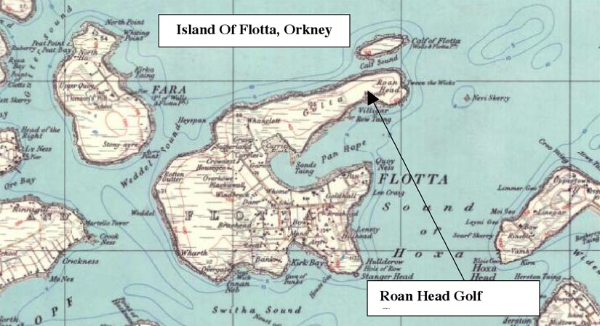 "During both World Wars, the Fleet was stationed for long periods at Scapa Flow, which is not renowned for its bright lights or amusement facilities.  One of the measures taken to provide recreation for the Fleet was the construction of a 14-hole golf course on the island of Flotta, and on Sunday afternoon, when the Fleet was in harbour, ships’ boats full of golfers could be seen making their way across the harbour towards the first tee.

A certain Admiral, who had recently hoisted his Flag in the Fleet, was told that this was the normal routine on Sunday afternoons.  He therefore sent for his Flag Lieutenant and told him that he would be required to play golf with his Admiral that afternoon.

There was quite a crowd of junior officers waiting to drive off at the first tee when they arrived, but the Admiral was quickly recognised and teed his ball up without delay, hitting a beautiful shot right down the middle of the fairway.

The Flag Lieutenant then addressed his ball, and much to the amusement of the onlookers did a complete air shot.  The midshipmen sniggered as he tried again, with similar results.  After this third failure to make any connection with the ball, he looked up, smiled at his gallery and said: “Damned difficult course, this.”   (PTP) 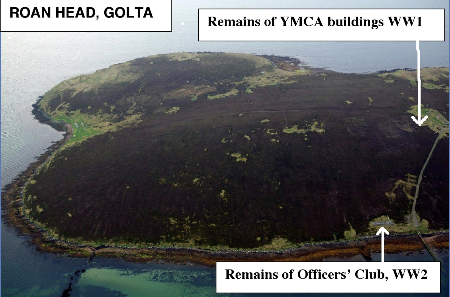 Sometimes referred to as Flotta GC or Scapa Flow GC