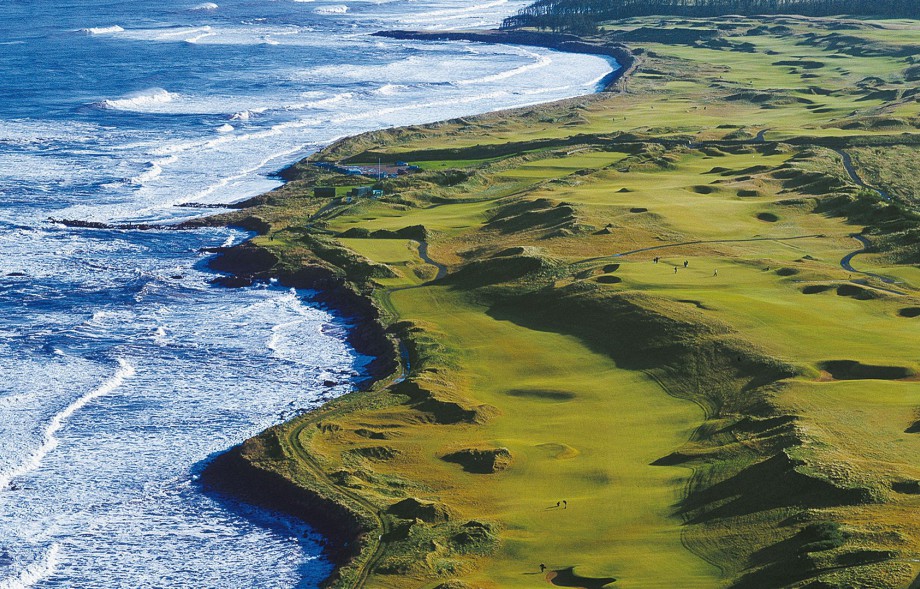 The original course is lying beneath all this modern rubbish, who the hell allowed this to happen !!!

"The Kingsbarns Golfing Society met on Saturday the 4th instant ; Mr Bell of Newhall, Captain, in the chair ; Andrew Philp, Esq. Of  Boarhills, croupier. The links where the members of the society usually play being at present undergoing improvements, The Earl Of Kellie, with that accommodating disposition which his Lorship is well know to possess, very politely granted the use of Cambo Links for the day. Several matches were played, and some of them keenly contested ; after which the party, to the number of 30, sat down in their hall to an excellent dinner, prepared by Mr Brown. After the health of the King and Royal Family were given from the chair, David Rodger, Esq. Of Anstruther, proposed a vote of thanks to the Earl of Kellie, for the attention his Lordship had shown in promoting the interests of the society ; and that a full bumper should be devoted to the health and happiness of his Lordship, which was hailed with the highest enthusiasm, and cheered with sentiments of the most sincere respect and veneration. Many other loyal and patriotic toasts and sentiments were given, and several excellent songs sung ; and the evening was spent with that harmony and good humour which has uniformly prevailed in the society." *CM 13,5,1832)

"On Saturday last, the 3rd instant, the silver medal belonging to this society was played for over Cambo Links, which after a keen and close contest, was gained at 86 strokes by Alexander Latto, the secretary, Mr Latto has been a keen competitor for that honour for the last ten years, and he seemed not a little proud when declared the successful candidate, having in the competition been singly opposed to the late medal holder, who had carried it off triumphantly for several successive years. The party, after playing several interesting matches, repaired to their hall, where an excellent dinner awaited them – Mr Hill of Randerston, Captain, in the chair." (FJ 10.5.1833)

The Society operated until around 1850, when the land was returned to farming. 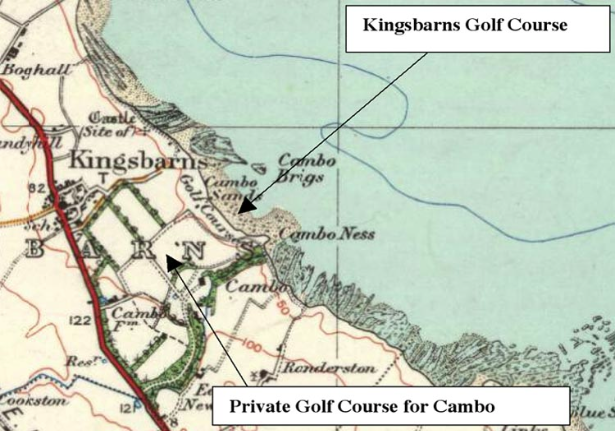 “The report submitted by the secretary at the annual meeting of the Kingsbarns Golf Club showed the club to be in a flourishing condition, the membership during the past year being over 80. The income from visitors during the summer, especially July and August, was most encouraging. The following office bearers were elected :- Hon. President, Sir Thomas Erskine, Bart of Cambo ; Hon. Vice Presidents, Miss Nimmo, Kingsbarns House; Mr W. Deans Wilson, Morton; Chairman of Committee, Mr George Giles, Hillhead; Captain, Mr W.R. Cairns, Ashburn, Crail; Vice Captain, Mr Robert Inglis, South Quarter; Secretary and Treasurer, Mr Robert Lawrence, The Schoolhouse.

The land was again returned to farming in 1939.

"Golf is likely to disappear as the village sport at Kingsbarns, and bowling may take its place.

The golf course was a coastal mine field during the war and it was impossible to walk over it. Kingsbarns golf club members are considering winding up their affairs, because they cannot find the money to restore the course. A suggestion has been made that a small piece of the course should be converted into a bowling green." (DC 19.1.1948)