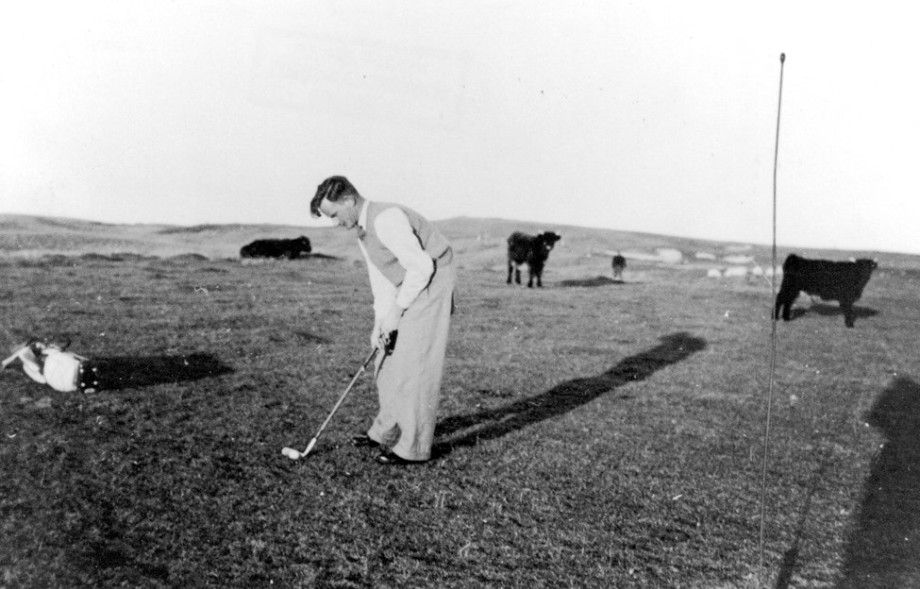 Unravelling the history of golf on North Uist is a very uncertain exercise, principally because many references use place n mes rather than formal club names, and many of the locations are close to each other and (we believe) either or both names are used at different times,

The following is our interpretation of the situation. 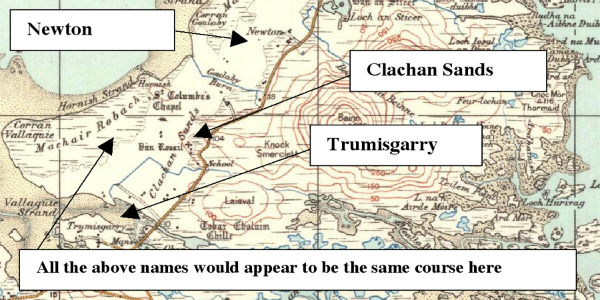 North Uist Golf Club. Instituted 1894. “A long standing proposal to form a golf course in North Uist has at last taken practical shape, and the district has now got what is possibly one of best courses on the west of Scotland.  Few places possess the accessories of a good course in such a abundance as these are to be found on the machars or links on the Atlantic shores of North and South Uist.  The turf is beautifully firm, there are bunkers in plenty, and the surroundings of the course is delightful.  The ground was well described by an enthusiastic golfer on the opening day as a “regular sporting course.”  On Saturday, 21 April, a large party of ladies and gentlemen met on the course for the purpose of opening it, and as the weather was very good, a most enjoyable game resulted. Mrs Campbell Orde of Newton, after formally declaring the course open, led off in the first round.

At a meeting subsequently held it was resolved to form a club, and the following office bearers were appointed:- Mrs Campbell Orde, Newton, lady president; Mr A.J.Campbell Orde, younger, of Kilmory and North Uist, President; Sheriff Webster, Lochmaddy, Captain; Mr James M.Fraser ,bank agent, Lochmaddy, secretary and treasurer.  Sheriff Webster has been untiring in his endeavours to have the course well laid out, and he personally superintended the whole work.  The “home” hole is only three quarters of an hour’s drive from Lochmaddy, and the facilities for playing will be a boon to residents there, as well as a welcome variety in the pastime of anglers staying at the hotel.” (OT 5.5.1894)

Because of the part taken by Mrs Campbell Orde, and the distances quoted, it is assumed that the course is at Newton.

"Though not regularly played on, is usually in very good condition owing to the fine turf.  A very fair course.” (WWG).

“At a meeting held in the courthouse, a representative gathering unanimously agreed to resuscitate the North Uist Golf Club that had been in abeyance for several years. The course used by the old club at Trumisgarry is no longer available as it has been divided into crofts. Unfortunately, the ground here presents far more difficulties in course construction than Trumisgarry, which was a natural course, not excelled by many mainland courses.” (BTWL)

“Two years ago a temporary course of 9 holes was laid out at Sponish, chiefly through the undefatigable efforts of Inspector Young.” (BTWL)

Last year the golfing community decided to look elsewhere. Through the generosity of Mr Hitchcock of Lochmaddy Hotel, a large tract of ground was available and again Inspector Young had the task laid upon him. He overcame most of the natural difficulties, and spent much time effecting improvements. At the meeting he received recognition of his services by being elected Captain . Mr Hitchcock and Mr Ranald Macdonald, C.M.G, O.B.E. were elected President and Vice President respectively; Mr E. Robertson, Vice Captain; Mr S. Ellis, Sectary and Treasurer ; Committee – Mr H. Crain ; Mr J. Cameron ; Mr Macloed. The annual subscription was fixed at 7/6d for Gentlemen and 5/- for Ladies and Youths It was left to the committee to see Mr Hitchcock regarding ( 1 ) the rental of the course ( 2 ) Structural improvements and ( 3 ) the formation for local rules for the club.” (OT 28.2.1925).

“When I came in 1929 there were no houses at all between the hotel and the Pier.  In fact there was a golf course.  It was looked after by one of the old characters here, Seonaidh Mor.  He was an excellent green keeper.  He used the scythe, and it did the job quite as well as the modern mower” (BTWL) 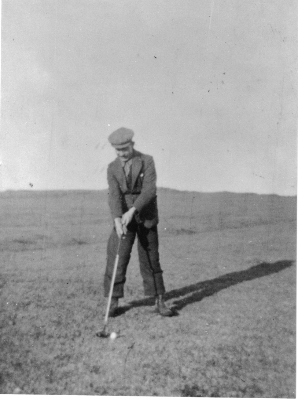