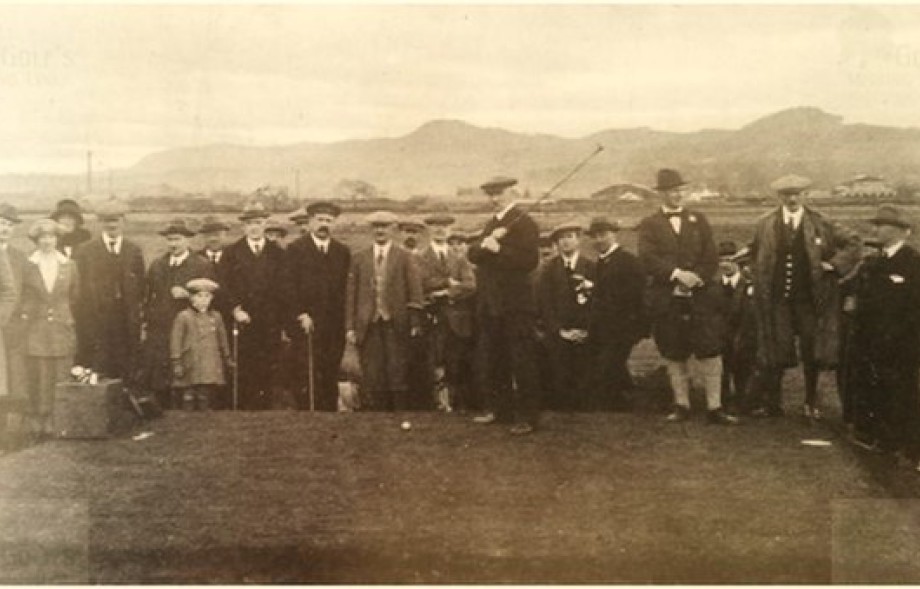 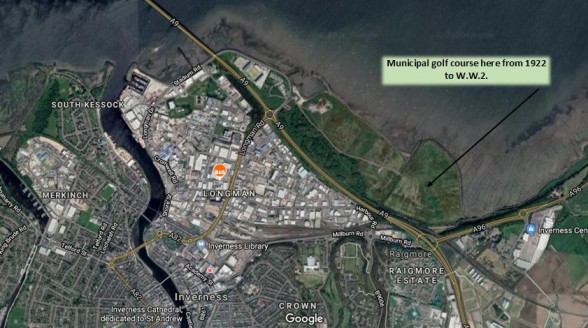 Inverness Municipal Golf Course. Opened 2 December 1922. A nine-hole course on the Longman, the holes varying from 100 to 250 yards.

The Longman had been home to Inverness Golf Club from 1893 until 1895, when it extended its previous course at Culcabock. The ground was adopted by the council in 1922 for the municipal course. 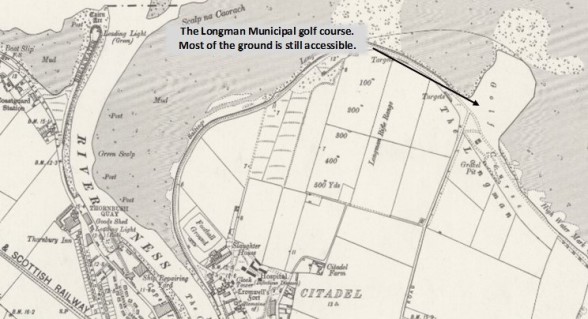 Opening of the golf course

"The Municipal Golf Course of nine holes at the Longman was formally opened on Saturday by Provost David Petrie, in presence of a large party of members of the Town Council and members of the Inverness Golf Club. The weather was breezy but pleasant. The round of the course starts on 'Smith's Island,' on which there are three holes, and then follows the road towards Milburn, with three holes outward and three holes inward. The lengths of the holes vary from 250 yards to 100 yards, affording quite good play. A neat club-house has been placed near the first tee.
Provost Petrie referred to the great and growing popularity of golf, and said it was a game which every man and woman could play - the young violently and the old moderately - and get as much or as little exercise from it as they desired. He had pleasure in declaring the course open, and hoped it would be largely taken advantage of by the public.
The Town-Clerk read a letter from Mr A. F. Steele, an ex-president of Inverness Golf Club, regretting his inability to be present, and wishing the course all success. It was, he stated, the fulfilment of a proposal made over twenty years ago, when Sheriff Blair, Chief-Constable Machardy, and he waited on the Town Council as a deputation from the Golf Club. A letter of apology for inavoidable absence was also received from Mr Thomas MacEwen, president of the Inverness Golf Club. Mr Laing said the scheme completed that day had been suggested to the Council by the local branch of the British Legion.
A vote of thanks, proposed by Mr Coutts Morrison, was passed to the Provost with loud applause.
Provost Petrie, who was partnered by Mr D. W. Call, burgh assessor, drove the first ball amid applause. Members of Town Council and local golfers then played over the course. The lowest score for the double round was 69, which was returned by two players - Messrs Bookless and Garvie." (IC 5.12.1922)

“The course remained open until the onset of WW2 when the War Department commandered the land to be used as an RAF base for the duration of the conflict. After the war the Longman was designated as an industrial area for the growing town. It is still just possible to see the site of some of the original tees if you know where to look!. The Longman Trophy is an annual event named after the course and is one of the many assets of the former club donated to the Torvean Golf Club.” (Torvean Club History)