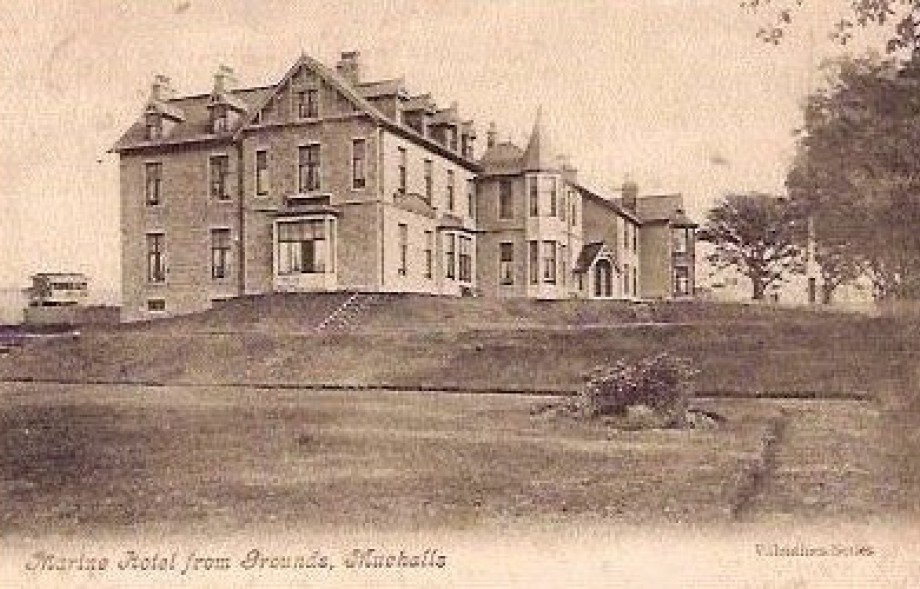 Muchalls Golf Club.  Instituted 1908.  “A nine-holes course is being laid out by the Aberdeen Educational Trust on their property adjoining the Muchalls Hotel, and stretching between the railway and the East Coast Highway.” (GA 1907-08) 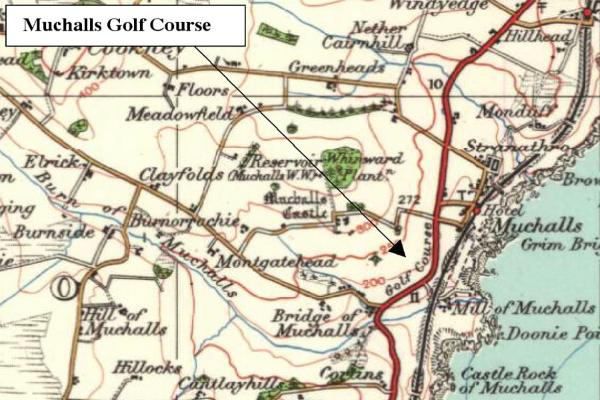 "The new golf course formed in connection with the Marine Hotel, Muchalls, was formally opened on Saturday afternoon by Mr George J. Walker of Portlethan, in presence of a large assemblage of residents and visitoprs.

The course which is one of nine holes, extends over 35 acres of ground, and while it is conveniently situated in the immediate vicinity to the South of the Hotel, the soil is of such a nature as to favour the venture. There is a nice sandy surface and good turf, so that variable weather conditions will have little effect so far as the game is concerned. The site is an attractive one, running practically along the sea front, and the formation of the ground provide excellent natural hazards, which add considerably to interest in the play. The greens are excellently prepared, and for a nine hole course visitors to Muchalls will find it a good test of their ability. The holes are named the Castle, Danny Mearns, The Valley, The Hillock, The Brig, The Mill, The Corner, The Gairn and The Marine. The longest hole playing to the Mill, is 470 yards, and the shortest, to the Corner, is 200 yards, but while the latter can be covered from the tee to the green with a single stroke, the public road intervenes, and with it’s dykes on each side, may form a trap for the unwary and make missing take costly for the player.

Mr Peter Gillespie, who has a lease of the Hotel and ground from the Aberdeen Educational Trust, is deserving of every credit for the enterprise he has shown with a view to meeting the wants of a place that is rapidly coming to the fore as a holiday resort. Mr Gillespie will also make special arrangements for catering for the needs of visitors from Aberdeen  and Stonehaven, from which place there will be reduced railway fares during the summer season ; while it may also be mentioned that those staying at the Hotel will have the privilege of playing over the course free of charge.

Mr Gillespie has received the enthusiastic support of the residents in the district, and a local club has been formed, with a membership of over 50, for whom ample accommodation has been provided in the clubhouse at the Hotel.

Colonel Douglass Duncan, in calling upon Mr Walker to open the course, said that gentleman required no introduction to the people of Muchalls, but he might explain to the visitors that they had such an affectionate regard for Mr Walker in that quarter that they thought no function could be satisfactorily performed unless he was there to give it his blessing. Mr Walker was a very busy man, but when anything was required of him in a neighbourly way, he always found time to do it, and they were all very pleased to see him there that day.

Mr Walker who was cordially received, expressed great pleasure in performing the duty that had been laid upon him. He must tell them, however, that he had not struck a golf ball for 30 years, and therefor they must not expect a great performance from him.

Golf was game that was now very much played all over the country, and he believed it to be a most delightful recreation, not only for young people, but also or elderly men like him and the President of their club. ( Laughter and Applause.) He trusted that the course would always be well supported, and indeed he thought it was bound to find favour with the public, connected as it was with such a fine Hotel, and situated so near the Railway Station. It was with every good wish for it’s future success that he declared the new course open.

Mr Walker then drove the first ball from the tee and the prerformance was greeted with loud applause, which was not unmixed with merriment. The ball lodged about the person of Mr Gillespie, who was operating a camera, a short way up the hill and after a brief search the hotelkeeper dislodged the small sphere from his sleeve amid an outburst of merriment from the onlookers. Mr Walker joined in the laugh and added to the humour of the situation by remarking that he had “ Holed Out In One.”

The members nof the club then engaged in the first competition for the monthly medal. Mr Ritchie, Redcraig, was the successful player in the gentlemans competition with 44 ; and Mrs Wills in the Ladies, with a score of 66. (May 1909)

Home and away matches against Laurencekirk 1913. 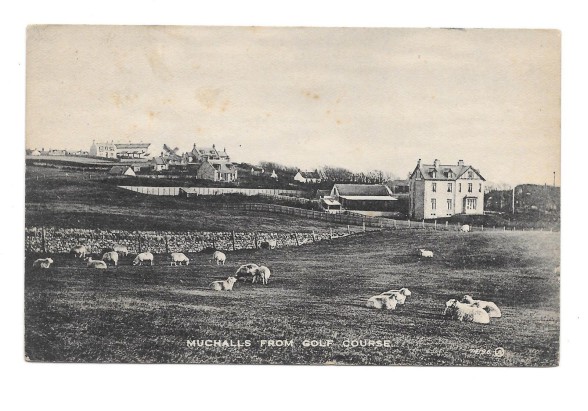 High overheads and a drop in membership, together with the reconstruction of the road (A90), has made it impossible for the club to carry on.” (GI 17.12.1959)

Lots of files to type for this course