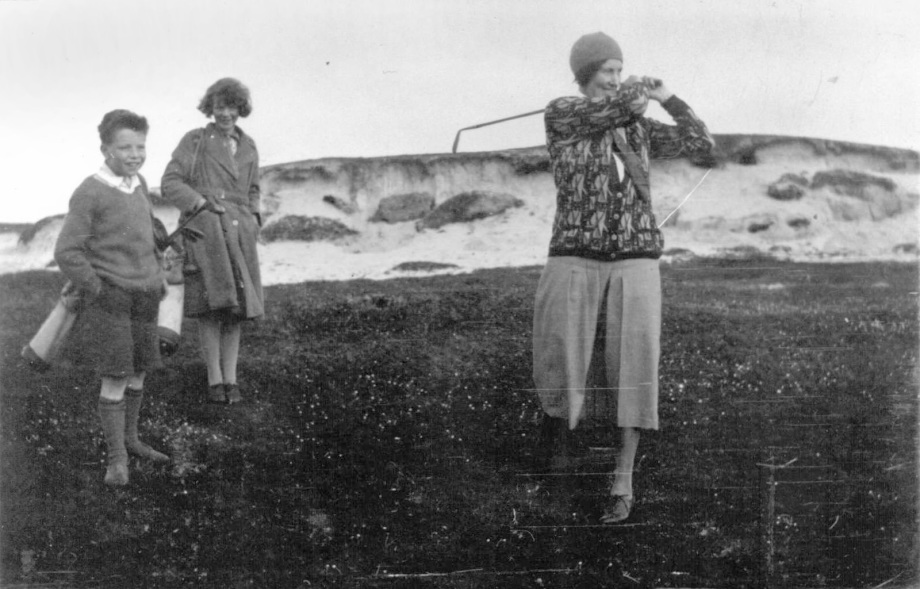 Westray Golf Club. Instituted 1899.  A 9 hole course at Breckowall, a quarter of a mile from the village centre and a mile from Gill Pier.

“Westray has had a nine hole course since last century, and during recent years, interest in it has been maintained and increased. This is a typical seaside course, with an undulating surface on a sandy soil, and a wide burn running through the centre which has to be negotiated four times on the present layout, providing a real sporting element. The main hazards, apart from the burn, are rabbit scrapes, but these can be avoided by local expertise. At five holes a wooden club is necessary for the second stroke.” 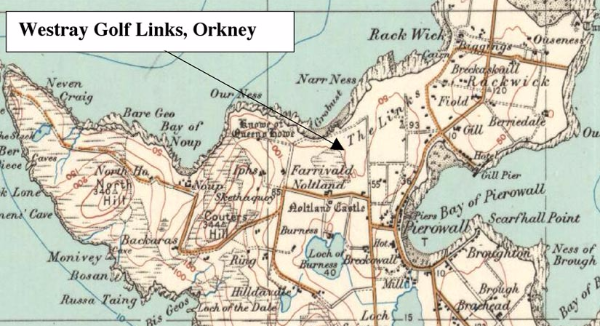 Mr Mackay of Pierowall Hotel, having secured the North Links, has laid out a nine hole golf course. The whole course is of a true sporting character and affords scope for some first class paly. The turf is in excellent condition, the hazards are all that a golfer could desire ( except, perhaps, when his ball might happen to land in one ), sandy bunkers and running water are in evidence, especially when the right line is deviated from, and the greens are in fairly good condition. The whole distance round is about one mile and a half. The situation of the course is most picturesque and is in the unique position of being the most North Westerly golf course in Great Britain. A formal opening took place on Tuesday afternoon 9th inst., when a friendly match was played in which the following gentlemen took part :- Rev. W. Harcus, Mr C. Harcus, Sheffield ; Mr W. Mason, Edinburgh ; Dr Rendall, Westray ; Mr J. Donald, London ; Mr W.J. Pollock, Masterton, New Zealand ; Mr McLean, Westray ; and Mr Mackay, Westray.

Westray took an important step forward last week, and came into line with other health and pleasure resorts of our beautiful islands by having a meeting in the village class-room in order to formally establish the Westray Golf club. The Rev. Donald Ross presided over a good attendance of ladies and gentlemen, resident and visitors. Dr Heddle read over the proposed constitution, and on the motion of Mr John Drever, Balloch, all present agreed to become members, some thirty names secured. The honour of being the first President of the club was assigned to Mr George Mackay, of Pierowall Hotel, the present lessee of the North Links, and a golfing enthusiast.

Dr Heddle was elected as hon. Secretary and treasurer and Messrs Ross, Timothy Hewison, George Logie, and two lady members ( Misses Struthers and Henderson ) as the acting committee. A very pleasant and hearty meeting, the business of which was skilfully piloted by the Reverend chairman, was closed with three cheers for the latest addition to the golf clubs of the British Isles.

The course is a nine holes one at present, grandly situated facing the North Sea, with beautiful turf and bunkers enough to earn the respect of even Old Tom Morris. We hope soon to give our readers an extended description of the links. On Saturday afternoon, Mrs Ross formally opened the links by driving the first ball from “ Newcastle,” and was asked to keep the same as a memento of the occasion, and of her husbands kindly interest in the club. After an enjoyable round the lady members provided 5 o’clock tea, and thus auspiciously in the brightest of sunshine the youngest club opened its career of innocent and health-giving sport in one of the loveliest scenes that even the North Isles can show.