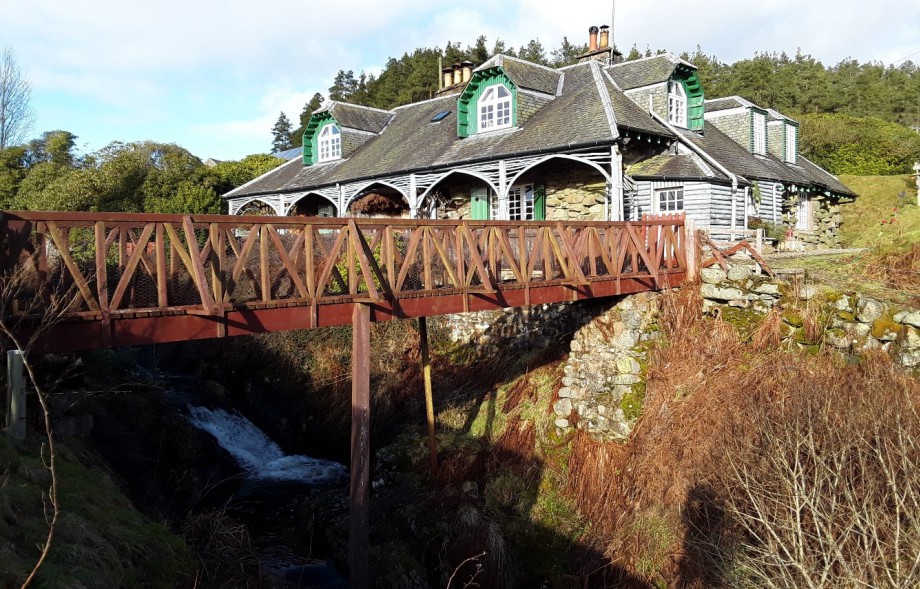 First Club and Course In The Grampians.

Golfing On The Grampians

On bending my way to Conachan Shooting Lodge, belonging to James Condie, Esq, on Monday, the 20th April, and turning round as I topped the last eminence on leaving the cultivated Vale Of Earn, the shrill whistle of the plover, the wild note of the curlew, and the whir of the Moor-Cock, broke with cheerful cadence on my ear, reminding me of the many glorious days I had enjoyed with my fowling-piece on the dark-brown mountains of the North. My visit, however, on the present occasion was of a more peaceful character – it was to witness the first “ Play” of the season at the ancient and beautiful game of golf.

Maga has already described this national sport in far better terms that I can pretend to : I shall, therefore, confine myself to the object I had in view in visiting this far-famed lodge in the Grampians. As the cottage first burst in my view, close by the side of a mountain torrent, the abode of many a silvery tenant of the deep, the lines of the mighty “ Minstrel” recurred to me in vivid recollection :-

“ it was a wild and strange retreat

As e’er was trod by outlaw’s feet

The dell, upon the mountain’s crest,

It’s trench had stayed full many a rock

No murmur waked the solemn still,

Save tinkling of a fountain rill ;

But when the wind chafed with the lake,

A sullen sound would upward break,

With dashing hollow voice, that spoke

The incessant war of wave and rock.

A romantic wooden bridge over this mountain torrent leads to the front entrance of the cottage, in the hospitalities of which I have often participated when returning from the wild glens of the pass of Glenalmond with a well-filled game-bag : indeed, during the shooting season, the worthy owner throws his doors open to the knights of the trigger, literally carrying out the observation of one of our good old Scottish kings, in reference to his chief magistrate of the old burgh of Forfar, who kept open house the year round, “ The mair that cam the merrier.”

As a true lover of the trigger, my first point was the kennel, and here I set my eyes on three brace of pointers, such as are not often to be met with anywhere, and such as would make the mouth of brother RINGWOOD to water, and induce him to confess that though the breed of the pointer may have degenerated in the South, he is still to be found in the North in all his purity. Hector is a beautiful white dog with a black head, perfect in every attribute attatched to the species. Venus, a light liver-colored bitch, is a fit co-mate to the Trojan chief. They were bred by Robert Smythe, Esq., of Methven Castle, and broke by John Goldsmith, the head-keeper. The kennel is under the menege of Donald Cameron, from the sweet banks of the Garry, and the whole arrangements do credit to his surveillance : the dogs seem little affected by the turmoils of the past season, and will be in prime condition long before the 12th of August.

But see, the red coats are gathering on the mountains brow –

“ Not as the clans of yore.

Arm’d with the broad claymore,”

But in the costume of the “noble science” of which most present are stanch followers, who donned the pink in compliment to “ Worthy Jamie of Conachan” – all with their golf clubs in hand ready to compete for a splendid silver medal, the gift of George Grey, Esq., secretary to the Royal Perth Golfing Club. Among those present were, Captains Campbell and Gardener, Dr H.B. Macfarlane, Messrs Blair, Ferguson, Grey, Mitchell, Paterson, Patton, Peddie, Robertson, and last, not least as an adept in the noble diversion, Mr Condie, of Conachan.

Of the delights of the game itself, I cannot do better than quote a passage from the speech of Charles Robertson, Esq., of golfing notoriety, delivered at the dinner which succeeded the days play :- “ This is the greatest day that has been since the time of James the sixth. We read in Buchannan’s Ancient history that the Royal Monarch, after having played a game of tennis, went to the South Inch of Perth, and took a game of golf : and if you look, you will there find one of the holes cut which that Monarch played. If any man inquire of me by what means he might benefit his bodily health, instead of recommending him to the sea-coast, or to climes of more Southern latitude, I would advise him to go to where we have passed this glorious day, and take a turn at that health-restoring, strength-renewing, nerve-renovating, blue-devil-dispelling Royal Game Of Golf.

The weather was all that could be wished, and the contending parties were well matched : and after a keenly contested game, Mr Condie was first and first, having played over the ground, twice round, 26 holes, out of 135 strokes. Mr Robertson, of Buttergask, and Dr Macfarlane were neck and neck at 135 each. The ground presented many difficulties no doubt, and it was amusing to see the awkward predicaments in which the players were occasionally involved, now disturbing the wild-drake that flew off squeaking in terror, and then rousing the moor-cock from the mountain’s brow, whose cheerful note echoed along the hill-side.

Most assuredly this was the first time that this game was ever played on the wild and stupendous Grampians.

After the decision for the medal, several good matches for high stakes were played for, in which Mr Grey and Dr Macfarlane “ Bore the Bell.” Other matches at “ Putting” came off, in which Mr Peddie, of Pitcullen Bank, secretary to the Perthshire Hounds, was the champion, frequently placing the ball into the hole at one stroke.

The greatest harmony and good fellowship prevailed throughout the day, and the members with a few friends sat down to a substantial dinner provided by mine host of the Foulford Inn, where the glass went merrily round : and after passing the evening in a truly sportsmanlike manner, all took their departure highly gratified with the pleasures they had enjoyed, and all united in wishing prosperity to the CONACHAN GOLFING CLUB.

No season is dull to the true sportsman : and all I can add is the hope, that whilst our Southern brother sportsmen are seeking their pleasure in the game of cricket, or other congenial pursuits, this rural club may long enjoy many such days as Monday the 20th of April. !

At the formation of this society the number of members was below twenty ; but by the fostering care of Sir David Moncrieff and other distinguished noblemen and gentlemen, who readily came forward to patronise and support such an ancient, fascinating, and invigorating exercise, it consists at present of upwards of two hundred members.

Many of the Perth gentlemen go out occasionally to play at Connachan ( Distant about sixteen miles ) the shooting ground of James Condie Esq., contiguous to whose lodge there is an excellent golf course. Last year George Gray Esq., secretary to the Royal Perth Golfing Society, in the most handsome and generous manner gave an elegant medal to be played for annually at Connachan. This medal was gained in last April by Mr Condie, who for skill, elegance, and dexterity has long been considered one of Scotlands first-rate golfers, thus adding another to the many laurels which have adorned his brow. – To enjoy a days golfing or shooting at Connachan, and in the evening participate of the princely hospitalities of the lodge, has been reckoned the ne plus ultra of human happiness.