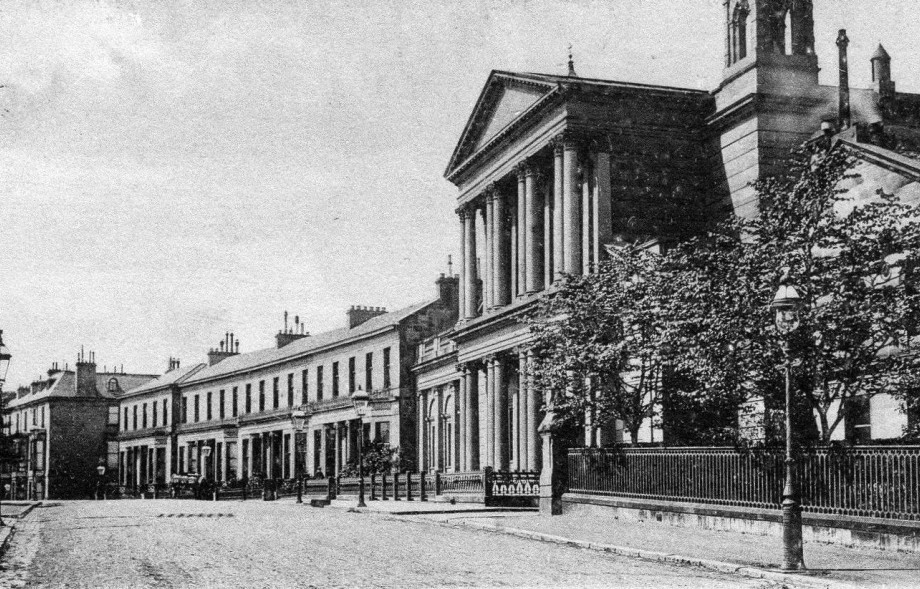 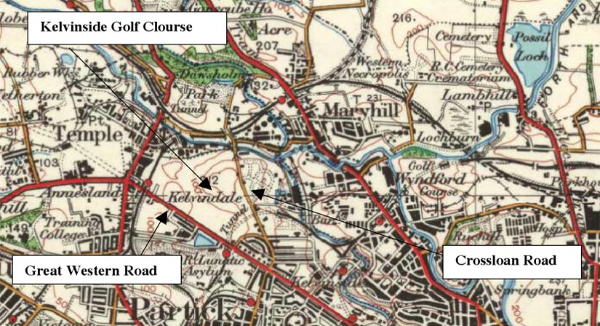 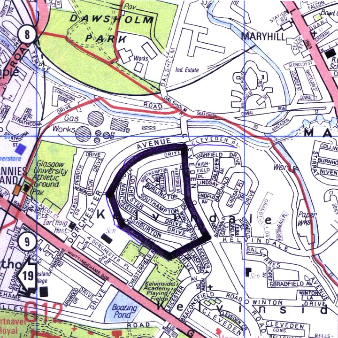 "There is only one drawback to the fine 9 hole course at Kelvinside, which was opened this afternoon (21 Apr 1894) by the superior of the ground, Mr J R Fleming, and that is the restriction on the membership.  The links could easily accommodate a larger total than the limit of the club which is 150.  The conditions of membership were drawn up in accordance with the wishes of Mr Fleming, who desired that only dwellers of Kelvinside or 23rd Ward should be allowed to join the club.  This decision has debarred a number of enthusiastic Hillhead players from becoming members.

The Beaconsfield Hill has not all been utilised for the course, and if the committee were to lease two more fields, they could have an 18 hole course which would be second to none among the inland links of Scotland.  A good course open to West-Enders would be a great boon.  The turf is old, and as the grass is fresh it can easily be kept down by putting a few cattle and sheep on the ground.  There is a large quantity of whins, a rather unusual thing to find so near a large town, and these form excellent hazards at several of the holes.  Taken all over, the course is a thoroughly sporting one.  Naturally, the putting greens are a bit rough, but with steady rolling and a liberal supply of good sea sand, they should be in decent order by the middle of the season 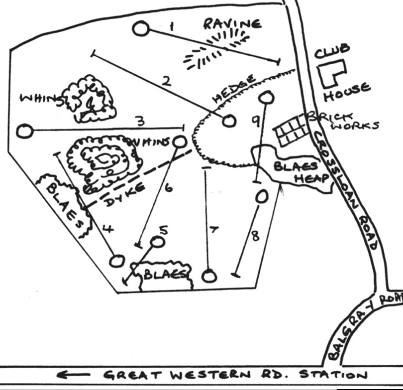 .  Access to the ground is off Crossloan Road, the gate being just beyond the brickfield on the left hand. The tee for the first hole is close to the Crossloan Road, and there is nothing to interfere with a good straight drive.  For this hole, the crucial stroke is the second, but if it is well judged the ball should carry the green, which is similar to the Tinto hole at Alexandra Park.  Guarding this hole is an awful gully, from the golfers point of view, and woe betide the luckless wight whose topping propensities land him in it.  Four is par play for this hole.  The second hole is on the top of the hill, and it is guarded by a hedge.  A full swipe should carry the green, but moderate drivers would do well to play short and pitch over the hazard with their second.  Three is par play, but four is good business.  The next hole is the longest and the finest in the round. It is situated right away at the bottom of the slope, and two capital drives are required to get the ball within holing distance.  The green is nicely situated, and a few yards beyond the spot likely to be reached by long drivers is a lovely cluster of whin bushes where many a ball will be lost, and where, also, many a promising medal card will be ruined.  Played perfectly, this hole should be done in four strokes, but most members will be satisfied with a five.  The fourth is another interesting hole.  A bad drive will be severely punished as there is a stone dyke and a cluster of whin bushes right in the track.  A sliced ball will nestle in the bosom of a huge bing of pit refuse.  To escape disaster here, the player must drive "at and sure."  Green 4 is also nicely placed, and a five here again will be considered good play.  the fifth hole is placed on a shoulder of the hill, but between it and the teeing ground is an imposing heap of refuse.  An iron shot will put the ball on the green.  A three will be fair play for this short hole.  A raking drive along the face of the hill, and a well judge pitch over the stone dyke, will enable the golfer to put a four on his card for the sixth hole.  A drive off the line will entail a nasty approach.  With perfect golf, a four should be recorded for the seventh hole. The only obstacle is a bogie line, which is beyond the limit of a good drive, but it will trap many a second shot. The green is in a corner, guarded on one side by a dyke and on another by a bing of refuse.  This hole calls for careful approaching, but a four will do for par play.  the eighth hole is 170 yards from the teeing ground, is uphill and, with the exception of a dyke on the right, has no hazards.  This should be a good three.  The last hole is a hazardous one.  With the tee shot, the railway, which has already been mentioned, and a six-foot hedge have to be negotiated.  Once clear of these, however, a nice approach shot should give the player a chance of a four, but a five will be satisfactory.  That gives as the par total 36; but this score will not likely be returned until the putting greens are consolidated.  As yet, they are very rough, and as a result many strokes are thrown away. Anything under 45 will deserve to be called good play for a month or two.  The members are very enthusiastic over their course, and various competitions are about to be arranged.  After Mr Fleming drove the first ball today, with a silver cleek presented to him by the Captain, Mr R McLelland, the members engaged in foursomes competitions.  It is proposed to erect a comfortable clubhouse in the near future." (GET  21.4.1894)

“In view of the number of resignations intimated to take effect as at the end of the season, a special general meeting of the club was held in the Religious Institution Rooms on Friday last to consider the position. A statement was submitted, showing that there would be a surplus of revenue over expenditure at the end of the current financial year, but that, in view of the resignations intimated, there would probably be a deficit on the working of the next year. Mr T S Cree, who occupied the chair (in the absence of Mr Carvick Webster, captain of the club, who could not attend because of illness) explained to the meeting that a deputation had waited upon the landlord, Mr J Montgomerie-Fleming of Kelvinside, who had met the club with a generous offer to reduce the rent by one-half, and practically to make the lease from year to year. In view of Mr Montgomerie-Fleming’s handsome modifications on the lease, in favour of the club, and to the explanations given to a guarantee fund which had been founded by a number of gentlemen who have specially interested themselves to the success of the club, the meeting unanimously decided to continue the club, and, accordingly, the resolution for winding-up was not put to the meeting.”