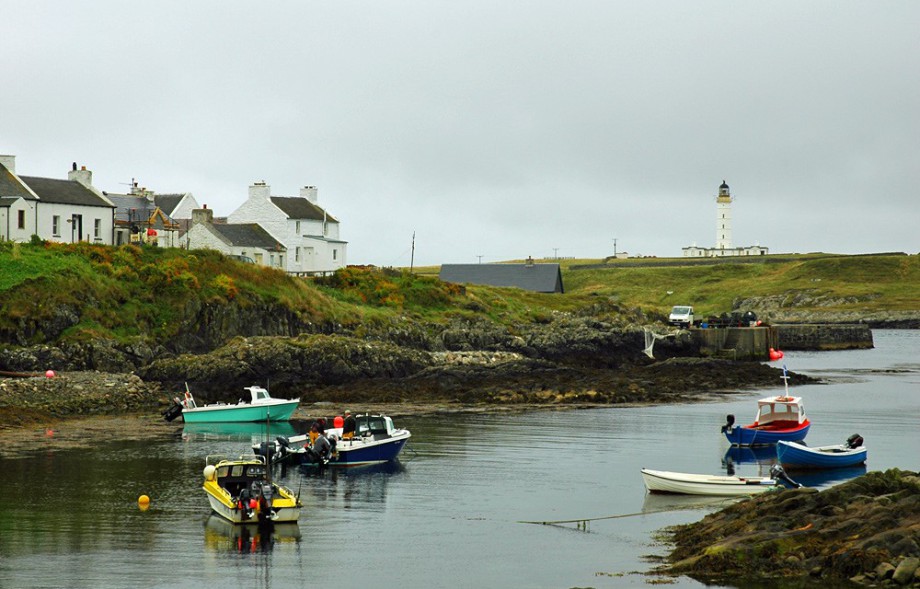 "On Saturday inst. the recently-formed Scanistle Golf Club formally opened their new course at Scanistle ,near Port Askaig. Unfortunately, the day was showery, but a large company, probably nearly two hundred people, assembled, including a strong contingent of enthusiastic golfers from the Gartmain Club, Bowmore. Visitors were present from all parts of the district. The rain only showed up the fine dry turf of which the course consists, covered with short,fine grass, which remained dry and springy in all conditions of the weather. There is an entire absence of heather, and trouble with lost balls will be reduced to a minimum. At three p.m. the company gathered round the first green and after being photographed by M A. Cameron, Bowmore, they were addressed by Mr Robert Cullen, solicitor, Bridgend, captain of the Club, Mr Cullen said in the winter time the idea occurred to Mr John Joss,steamer agent, Port Askaig, who was one of the most progressive men in Islay, that they had at Scanistle as fine a bit of ground for a sporting golf course as any in the country. In conjunction with Mr A. Mackay, Port Askaig Hotel, who entered heartily into the scheme, the idea gradually took shape, and eventually was laid before the popular proprietor, Mr D.T.Martin of Dunlossit. As they expected, Mr Martin placed no obstacles in the way, and only made two reservations, one being that no dogs should be allowed on the course, and secondly, that there should be no interference with the coverts by searching for lost balls.  If they could agree with Mr A. MacIntyre, Kiella Farm, on whose farm Scanistle,is situated, he saw nothing to prevent the club having a prosperous future. Mr A.MacIntyre had met them in the most agreeable way, and matters had progressed until the course was laid out. The Committee had very wisely planned it as a nine-hole course at the outset, but when they looked around on the unexplored territory over the hills they would agree that ample facilities existed for the formation of as good an eighteen-hole course as could be desired. They were now at the agreeable stage of opening the course, and in the name of the Club he called upon Mrs Martin of Dunlossit to play off the first ball, and open the course. (cheers.).

Mrs Martin, having been presented with a silver-mounted golf club, said she was very pleased to have been asked to perform the ceremony of opening the Scanistle Golf Course and hoped that the ground would be taken advantage of as fully as was practicable. It could not be expected that the greens were in first-rate order, but she thought that the way to improve them was by playing over the course as often as practicable. She wished the club every success.  Great cheering followed a successful first shot by Mrs Martin.

A very large number of golfers then engaged in play over the course, and in the evening it seemed to be a general opinion that the latest addition to the golf courses of Islay was a good practical course. Greens were found in fairly good condition, considering the early stage of the Club’s history.  Refreshments were kindly provided for visitors. Play was under the direction of Mr J. Joss, secretary, and Messrs. A. MacIntyre, Kiells; W.MacFadyen; Ballygrant; A. MacKay, Port Askaig; and C. Campbell, Ballygrant forming the Committee carried out the arrangements.

Mr D.T.Martin president of the Club, was on the ground all the afternoon, and the opening day passed off pleasantly.

The ground at Scanistle consists of short grass, broken by rock, with no obstructions from heather or bracken. The entrance to the course is from the high road in little over one mile directly inland from Port Askaig. Port Askaig has the best service of steamers of any port in Islay, having a direct connection with Oban, and an almost daily direct service to Glasgow by Clydesdale. Pioneer,Ethel. Cavaliers and Hebrides. The passage to Port Askaig is also the most sheltered route to Islay, so that golf at Scranistle should be popular with visitors to the island. The tourist is set down from the steamer at the cosy hotel at Port Askaig, and a daily walk slightly exceeding a mile will make golfing available amidst the very finest scenery of Islay." (OT 23.5.1908) 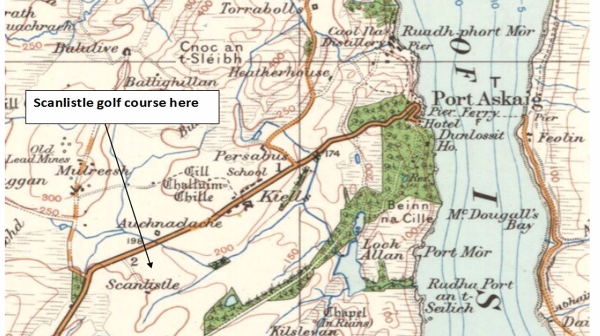 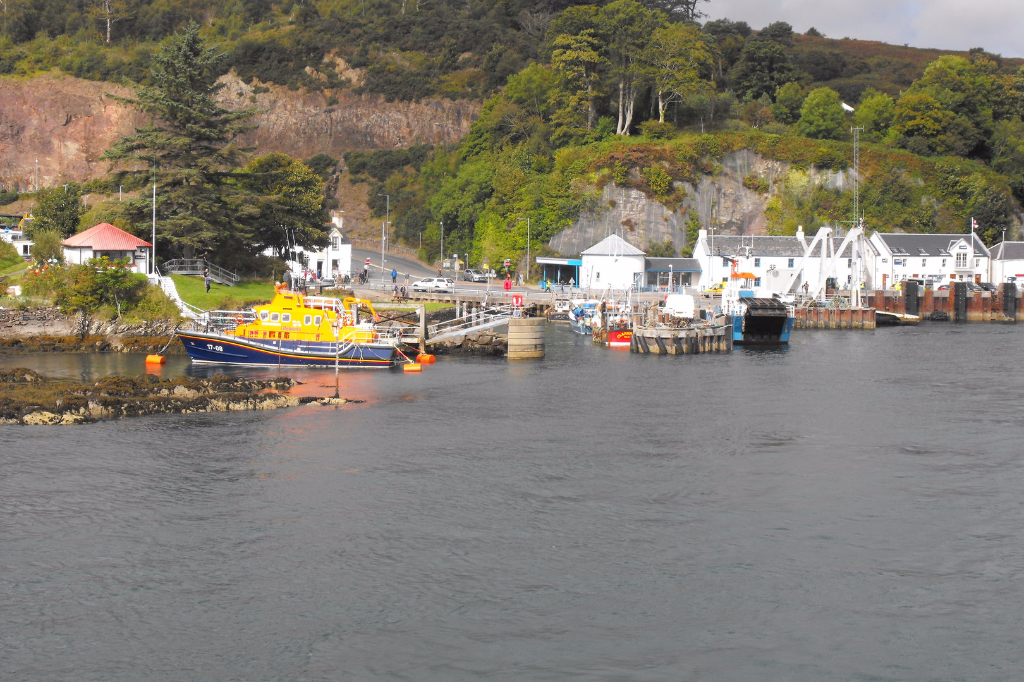