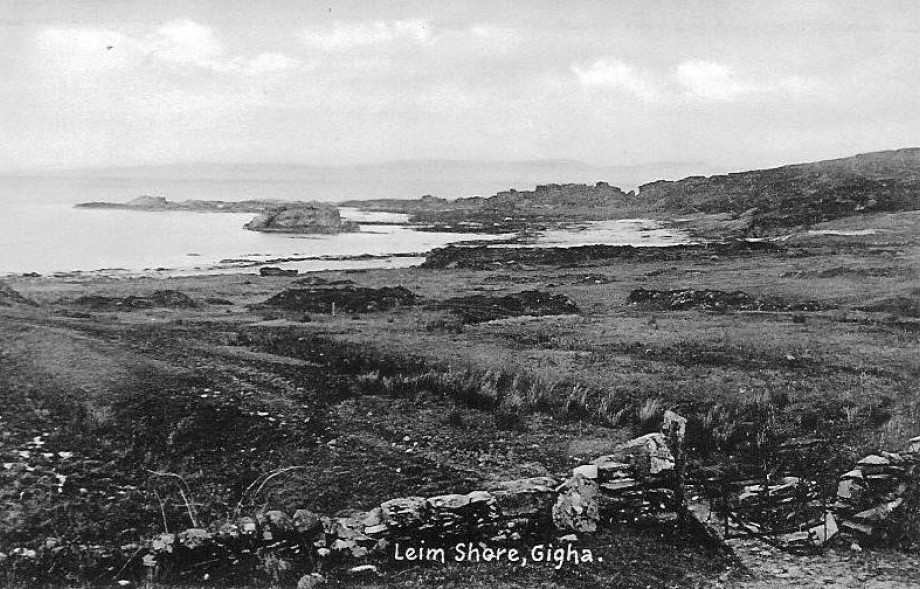 Gigha's First golf course was along this shoreline

Mr Alexander MacPherson, lissce of the Gigha Hotel, has introduced the game of golf into the island.  A course, consisting of six holes, has been made near Mr MacPherson’s place and it is intended shortly to add other three holes. A couple of matches between visitors and Mr MacPherson and another enthusiastic gentleman took place last week, the visitors being the losers.

The adjacent and pleasant island of Gigha boasts of a nine hole golf course of a somewhat sport giving character, and the members of the club are enthusiastic devotees of the fascinating game. It is on the carpet, or to vary the figure to make it more in keeping with the subject, it is on the green, that shortly a friendly match will come off on the Gigha Course between the local club and a detatchment of the Islay Golf Club. Steamboat arrangements on Wednesdays and Saturdays admit of this being done and returning to Islay same day. Apart from golf, this makes a very pleasant outing, but with the other thrown in it is quite an outing after the golfers own heart.

On Saturday, some of the members of the Islay club, to the number of six, braved the elements that divide Islay from Gigha in order to meet six of their co- gamesters, members of the Gigha club, in a friendly match over the recently formed course

On the lesser island.

The peculiar “ Scarred and seamed and chasmed” links proved too much for the visitors and they had to retire with the loss of seven holes.

This was the only inconsiderateness manifested by the Gigha men to their guests during their brief sojourn, the good cheer of their welcome being ample solatium for the time for their defeat.

A return match on the Machrie links is talked about, and will most likely take place during the season. The Gigha match was played in foursomes as under :-

Islay and Gigha – Mr Maclachlan and Dr Gilmour against Mr Macpherson and Mr Cavanagh ; the last couple winning by seven holes in eighteen.

From the book by Kathleen Philip

That leaves us with the most intriguing Gigha sport of all – Golf. Several people remember that “ everyone had a wee few clubs and went out of an evening.” Katie Wilkieson whom we met stoning raisins at the mansion house, calls to mind the day in 1895 or ’96 when the Islay bound steamer had to wait at the pier while the match between the Gigha golf club and the Islay club was concluded ! It was of course to the golf course that Sandy Orr galloped yelling “ There’s flames at Achamore.”

In 1911 the golf course stretched in a rough oval from Leim shore right along the west coast to behind the lodge. The brochure states that it “ was two miles round and, with its natural bunkers is a very sporting and interesting course while from it can be viewed some of the finest scenery in the district.”

All this I well believe, it must indeed have been a sporting course ! 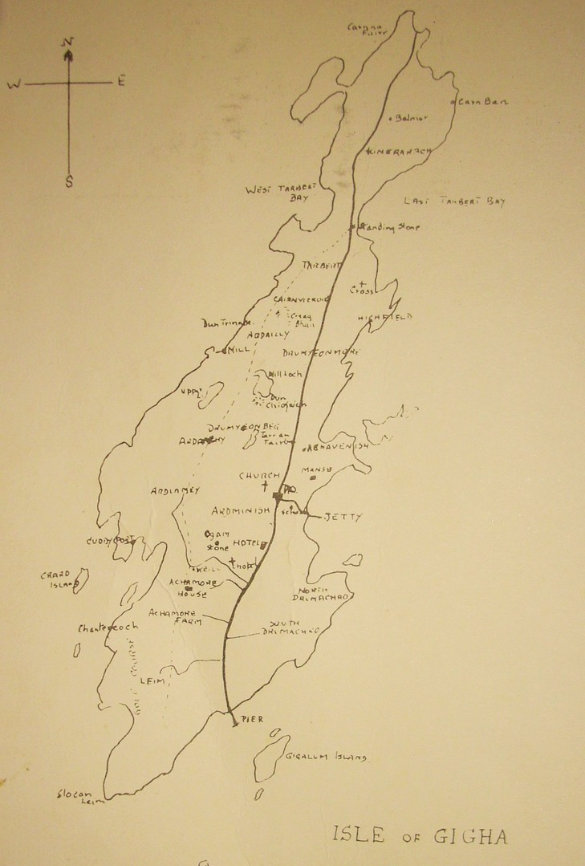 The map clearly shows the first course at Leim. Today's course is North of the Jetty