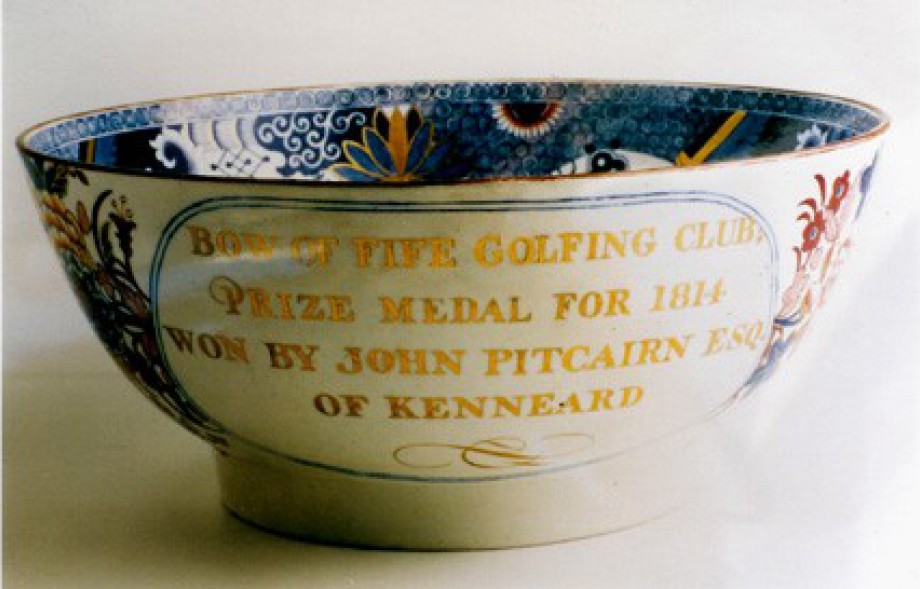 The Pitcairn Bowl is the earliest item made by Spode, in 1814. When discovered it was in 12 pieces stuck together with car filler paste, then restored at a cost of £600 and included in a Philips Auction in 1994, when it fetched a record price of £16,100..

“Bow of Fife. Nov. 13. – The golf club met here this day, when the prize medal was played for, and won by Mr James Carstairs, jun. Writer in Cupar. The members afterwards adjourned to their hall, where an excellent dinner was provided for them by James Watson, their vintner. Many suitable and appropriate toasts were given from the chair, and the evening spent with the greatest harmony.” (CM  22.11.1813)

“The Bow of Fife Golf Club has presented the family of Lieut. Duguid, of the Royal Marines, their late secretary, with a piece of plate bearing an appropriate inscription, as a testimony of their respect and esteem for his many rare qualities.” (FH 8.5.1824)

No further references have been yet found relating to the Golf Club. However there is a good description of the Bow of Fife Club. While no direct connection has been established between the two, given the rural nature of the surrounding countryside, and the proximity of dates, there is a reasonable possibility that the two were, indeed, connected.

“The annual meeting of the Bow of Fife Club was held on the 29th ult. At the Crown Inn, Letham. This club consists of farmers and gentlemen of the neighbourhood, most of whom filled various grades in the local yeomanry force of the District, during the times of revolutionary mania and those succeeding, when that force gave such an addition to the military array of Britain both for internal tranquillity and external defence. This yearly meeting, by reviving the recollection of past services, continues and propagates patriotic feelings; and the members, having now no occasion to exert themselves to keep the peace – or wait for the sound of the trumpet, occupy themselves in improving their fields, or devising schemes for the good of their servants and dependants. The chair was ably filled by Mr Wallace of Newton, whose affability and good humour added not a little to the interest and the delight of the evening’s entertainment.” (FH 6.6.1830)

One of the frustrating factors for myself in researching this course was the unconfirmed information given to me from The Earl Of Weymss that Alan Robertson had laid out this course. I have been unable to identify the actual location this course.