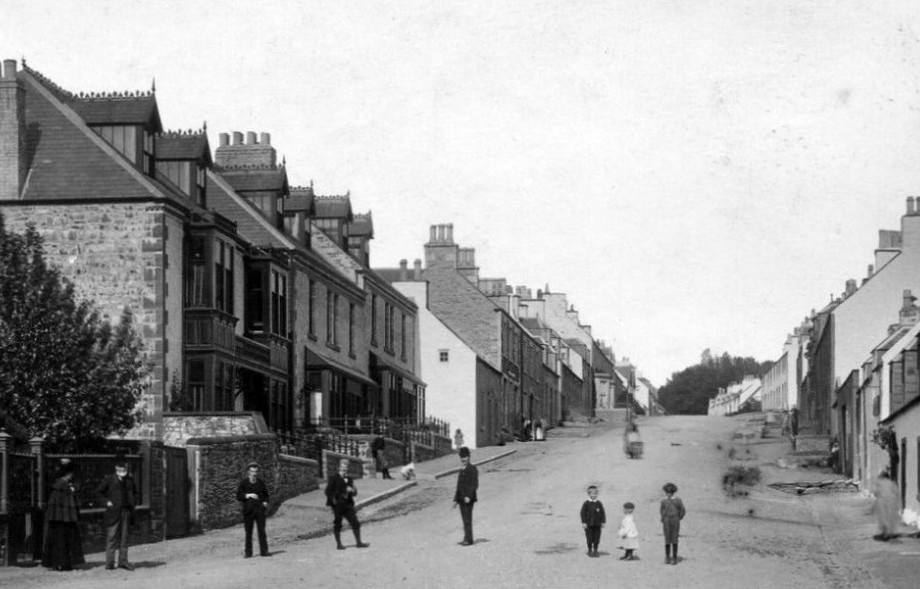 Dalry Golf Club, Instituted 1922. “A general meeting of Dalry (Ayrshire) Golf Club was held in the Public Hall on Thursday last, Mr James McCosh, Swinlees, in the chair. There was a large attendance of members. The constitution, rules and by-laws were submitted and unanimously adopted. The Captain fully reported on the work carried out in connection with the laying-out of the course, and intimated that, weather being favourable during the month of March, the course would be open for play by the first week in April, although there would be an official opening in June. Mr McCosh will present a silver cup for annual competition.” (ASH 24.2.1922) 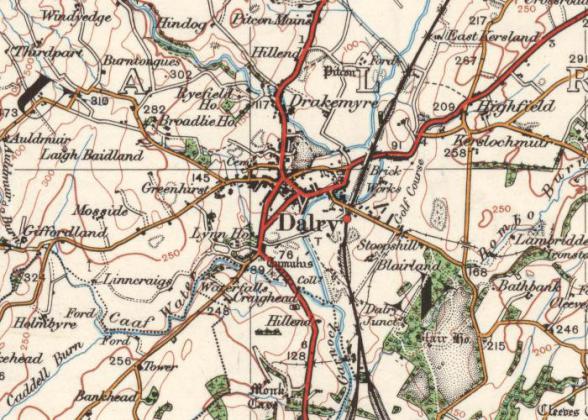 “On Saturday last the new golf course was opened. The weather was ideal when Captain McCosh and Vice-Captain Shedden, along with two lady members played a foursome over the course. During the day there was a splendid turn-out of members and friends, who were unanimous in their appreciation of the condition of the course.” (ASH 7.4.1922) 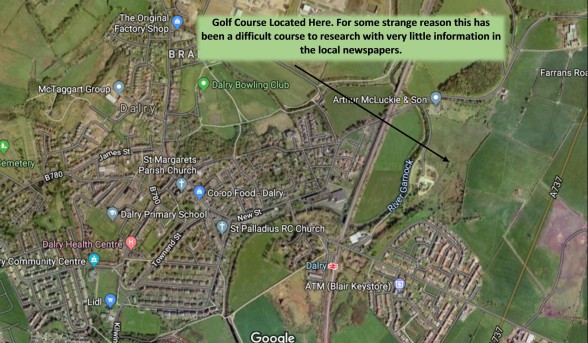 “A successful whist drive and dance took place in the Public Hall under the auspices of the Dalry Golf Club and on behalf of the funds. The function was a huge success and bespeaks the popularity of such occasions, providing, as they do, an ideal evening’s entertainment at a very moderate cost. A splendid tea was provided at the interval by the lady friends of the club.” ASH 9.2.1923)

“The Golf Club held a successful Jumble Sale on Saturday last, on behalf of clubhouse funds. The tables were well filled with articles of all descriptions, and large crowds were present all afternoon, and good business was done. (ASH 6.4.1923.)

“The Golf Club held a very successful whist drive in the club premises. After the prize-giving, the secretary, Mr T Smith, intimated that the committee were making a special effort to put the course in first-class condition; a new greenkeeper had been appointed, and a new mower purchased for the fairways. This meant a considerable addition to expenditure, and the committee hoped that the members would support them by trying to secure new members.” (ASH 4.4.1930)

“At a public meting in June 1972, an action group was set up to explore the viability of starting up a golf club. After looking at various sites, interviewing landowners, estimating costs and negotiating with Ayr County Council it was felt that the project was feasible. Consequently, at another public meeting in March 1973, the Dalry Golf Club was duly constituted. This was a necessary first step so the application could be made to various bodies for grants. A Ladies Section was also formed.

Since the cost would be around £100,000, Ayr County Council was amenable to the suggestion that it purchase the land and lease it back to the Club. The first possible site was at Lynnholm, but this was opposed by one of the landowners. They were then offered a site on the Fairlie Moor Road which appeared more than adequate. However it was then found that a tenant farmer had an option clause in his lease which he would not forego. Further negotiations between the Club and the Council were delayed by the transition from Ayr County to Cunninghame District Council.

Meanwhile, Mr Gilbert of Kersland had permission in principle to develop a golf course on his land and the Council considered that this was probably the best site for the proposed Golf Course, thus meeting Mr Gilbert’s aspirations and those of the Club.

However, the change of authority from that of Ayr County Council to that of Cunninghame District halted progress because it was not in the District Council’s remit to purchase the land and lease it to the club, as their role was one of assessing possibilities, leaving it entirely to the Club to open negotiations. Consequently, in April 1976, the Council advised the Golf Club of the costs and how an agreement might be reached with Mr Gilbert. Although further negotiations took place there were no conclusive results and, despite a strong feeling that a course would be very much in the local interest, the project was abandoned late in 1976