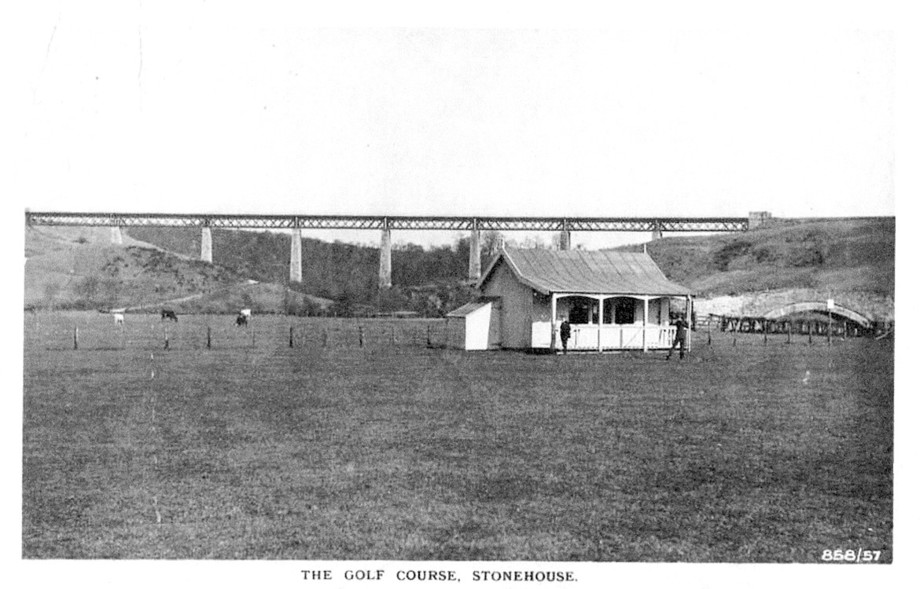 Course on the Holm Farm

Stonehouse Golf Club.  Instituted June 1896, the club, located at West Town Farm, survived only for a year. Another club was instituted in 1910, and formally opened in 1912. This was a 9-hole course on the lands of Holm Farm. At the AGM in January 1917 it was unanimously agreed to suspend playing for the coming year.  The course reopened in 1922 but it was not in good condition. It is not known how long it survived.

"A new club has been started at Stonehouse, excellent links have been secured at Westtown. Altogether it forms an ideal course, topographically and otherwise. The links are situated one mile from the town."   (ET 19.5.1899)

" A meeting was held on Monday evening for the purpose of organising a cake and candy sale, which it was decided should be held on the 25th March. Mr Stirling presided, and explained what had been done at the committee meeting.

It was stated that the committee hoped to raise about £50 by donations from friends outside the town, and as this venture is primarily for the prose­perity of the place, it is hoped that the shopkeepers, property owners, and householders will assit to make the scheme a huge success. It is gratifying to see the interest taken by the public in the club, and to have so many visiting the course. The commit­tee however, must remind friends that in the interests of the farmer and of the club it will be necessary to make some restric­tions. Steps are being taken to prevent boys going over the course unless when caddying. It is expected that the official opening will take place in April or May."   (HA 11.2.1911)

"The workers in connection with the recent sale of work had a pleasant social gathering in the lesser hall on tuesday evening. Mr Stirling, Captain of the club presided. After an excellent tea purveyed by Mr M Surgeon, The chairman, in moving a vote of thanks to the ladies for their valuable assistance at the recent sale, gave a highly interesting and amusing speech,which put everybody in good humour for the rest of the evening.

Mr Anderson, Inspector, replied on behalf of the ladies in an equally witty strain. An enjoyable programme of music was rendered by the following: Misses M Gray And J Thomson ,Messrs Robt Millar, A.Torrance, J.Thomson and J.Summers. Miss Lizzie Millar presided at the piano with her usual ability. In moving votes of thanks the Rrv Mr Macdonald took occasion to refer to the matter of house letting in the village during the summer months, and expressed the hope that everybody who could spare one or more apartments would be willing to let them for a month or so,in order to bring more visitors to the village. The singing of " Auld Lang Syne "brought the evening to a close."

"The new course on the Holm Farm will be opened on saturday next. Not withstanding the long spell of dry weather,the greens are in a very satisfactory condition. The clubhouse is now nearly fin­ished, and it is expected that Mr Wilson will have everything completed before the opening day. An exhibition game will be played,after which there will be a mixed foursomes for members."

"The committee of the golf club have now completed their arrange­ments for the clubhouse and course this afternoon. Mr Rule, the president has arranged an exhibition game, and Mrs Stirling, the wife of the captain, will dispense hospitality in the clubhouse during the afternoon."   (HA 17.6.1911)

Opening Of New Course And Pavilion.

"On Sat. afternoon last, the new course and pavillion at Holm Farm were formally opened. The weather in the forenoon was rather disappointing, but as the opening hour approached the clouds cleared and gave place to magnificent sunshine. There was a large turnout of members and friends , together with players from Larkhall, Strathaven, and other clubs.

Mr Rule of Blackwood, the President, made the opening speach, in which he dealt in a manner both attractive and amusing, with the history of the game, it's growing hold on the public, and it's influence on the individual.

Miss Mitchell of Brankston then drove off the first ball from the No 1 teeing green amid general applause, and the course was declared open.

The following gentlemen from the Glasgow Teachers Club played a fourball exhibition game - Messrs A & N.O'Beirne, W.Barbour and A.Buchanan. They found some of the new putting greens, owing to the long drought and sudden breakdown, rather heavier than is usual, and were slightly out with their putting, two strokes being usually required to hole, where ordinarily one is sufficient. The driving and approach shots were splendid, and the whole of the exhibition game was followed by a large and appreciative crowd.

The measurements of the various holes are ;

The drives of the players of the Craigs were specially brilliant and were much admired. A double round was played, and the best scores were ;

Later in the afternoon, a mixed competition took place between members of the club and visitors, which was greatly enjoyed, the winners were Miss Jean Borland, Messrs McNaughton, Wilson and MacIntosh.

During the afternoon, Mrs Stirling, Avon Cottage, the wife of the Captain, provided tea in the clubhouse, and her hospitality was largely partaken of and appreciated, members and visitors being loud in their praise of the manner in which Mrs Stirling and her lady assistants catered for the wants of the inner man, and which certainly contributed much to the afternoons enjoyment. The whole affair passed off in an exceedingly success­ful and pleasant manner."

"The executive have completed their arrangements for the opening of the course next Sat afternoon. The president Mr Anderson, has secured Willie Fernie, Troon, and his son Harry, who will play an exhibition match. The messrs Fernie are players of the first rank, and doubtless will give a scientific exposition of the Royal & Ancient game. Several improvements have been carried out during the winter - etc."   (HA 27.4.1912)

"The annual general meeting of the club was held in the lesser  hall on Tuesday night. MR A Anderson, Inspector, presided. The financial statement for the year was submitted by the treasurer, Mr Mackie, And showed a balance on the right side. The report was considered satisfactory and was adopted."   (HA 24.1.1914)

Re-opening of golf course after WW1

"The Committee of Stoenehouse golf club are working to get course ready for opening in the Spring. Winter greens have been laid out."   (HA 11.2.1922) 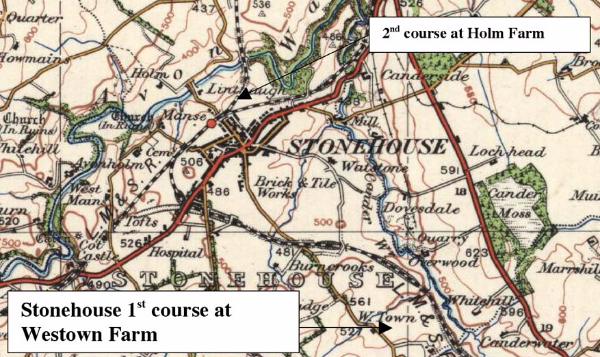 "On Sat last the golf course was opened in the presence of about 60 members of the club and friends.

The weather was good and the greens were in good condition when it is considered that this is the  first year of the course.

The course was opened by Wm MacKenzie, the president, who in his speech referred to the progress of golf since it was first played in Stonehouse, and to the large number of young and enthusiastic golfers who desired to find scope for the playing of the game since the closing of the old course on the Holm Farm. At the close of his speech, Mr MacKenzie declared the  course open and drove off the first ball. Thereafter members participated in mixed foursomes etc .:

"SIR - At the inception of this course several months ago a com­mittee was appointed to look after the interests of the members. It would appear that a cutting machine was then obtained, but not being in working order, was returned. Since then apparently no attempt whatever has been made to cut the fairways, with the result that the average height of the grass (hay would be a more suitable term) is from eight to twelve inches. How members can be expected to play on this passes my comprehension. Those who are sufficiently courageous to attempt it, spend more than half their time hunting for lost balls. Complaints have been lodged repeatedly with the secretary and others concerned, but no notice whatever has yet been taken. This is undoubtibly due to sheer neglect on the part of the committee, and I would remind them that when one pays a subscription for the use of the course one ex­pects some value for the money. It is hoped that the committee will either take steps to remedy this state of affairs at an early date or give way to others who are prepared to do so -