“In far-off Orkney, and eighteen miles distant from Kirkwall, we read of golf on the links at Birsay, where, according to advices, ther is an excellent eighteen- hole course. The round literally bristles with hazards, while the putting greens, naturally somewhat rough at present, are capable of easy conversion into lawn-like smoothness. Accommodation in the district is, unfortunately, rather limited, but Sergeant Abel, the greenkeeper, is always ready to accommodate a " Foursome," and other lodgings can be had in the village.”  (Golfing Annual 1888-89) 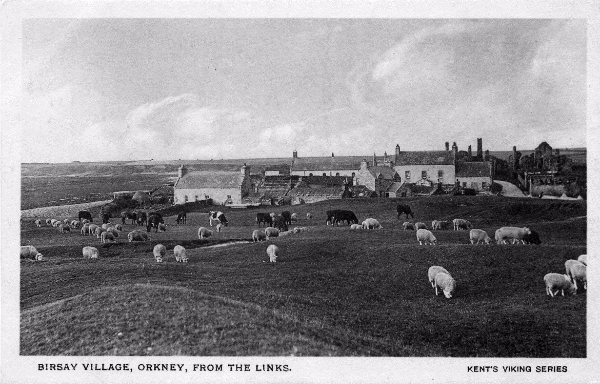 The golf course at Birsay was in fact laid out by the Kirkwall members of the Orkney golf club, based in Kirkwall, but, because there was a lack of suitable ground in or around the town. This may seem strange to our present 21st century golfers, but we should bare in mind that in the late 18th century grass cutting machinery was in it's infancy and golfers had to find locations where the grass was naturally short and suitable for golf. This type of ground only existed at the sea shores and was called the Machar. The club also had to travel to other various sites on the island in order to enjoy their game of golf.

Birsay, some twenty miles from Kirkwall was one of the club's earliest courses. It's quite amazing that these early golfers were willing to walk, cycle, or travel by horse etc, in order to play the  game.

This club held their first medal competition in the picturesque links of Birsay on Friday last. There was a good turnout of members, and considering that the course had just been laid out, some good scores were made.

Hitherto there has been no regular course on the Birsay links, though golfers have enjoyed a game occasionally when they has sufficient energy and enthusiasm to make the necessary holes for themselves. Now, however, that the club has been started, and that permission has been obtained from Mr Leask of Broadhouse, it is hoped that this naturally fine course will be largely taken advantage of by golfers. Sheriff Armour deserves great credit for his efforts on behalf of the game in Orkney, and we are sure that in consequence, the game will in time become here, as elsewhere, a favourite pastime. 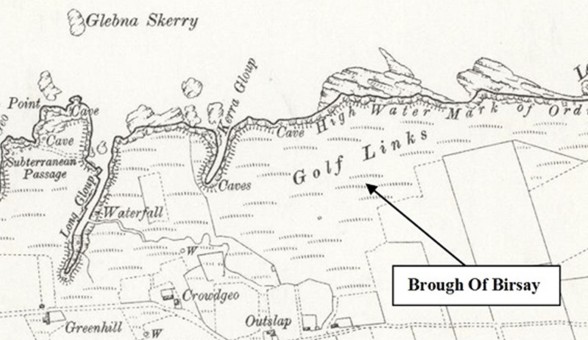 The monthly competition for Sheriff Armour’s challenge medal was held over Birsay links on Saturday. Mr Buchanan was the only player who had not the benefit of a handicap. Sheriff Armour made the lowest natural score, 90, which with his allowance of 9, made him 81 ; but he was not permitted to carry off his own prize. Mr D.S. Stewart, with a natural score of 93, being allowed 15 points, was the winner of the medal with a nett 78.

The members of the Orkney golf club engaged in their first monthly competition on Saturday for the star presented by Sheriff Thoms. Fourteen competitors took place in the match. The course was thrice round the links at Pickiequoy. Mr Buchanan was first, with a score of 102, Sheriff Armour was second with 105, and Mr D. Stewart third with 109.

Sheriff Armour’s challenge medal was competed for on the Birsay links on Saturday, 2 rounds singles, 18 holes. The sheriff made the lowest natural score of 93. Dr Gilrae came next with 94, but having more allowance than Mr Armour, he secured the medal. Mr Howman, procurator fiscal, was third with 97.

The monthly competition for Sheriff Thom’s silver star came off at Pickiequoy, Kirkwall, on Saturday – three rounds of the links, 21 holes. Mr D. Stewart was first with a splendid score of 89 – Messrs Buchanan and Howman tying for second place with 95. The scores of the others were sheriff Armour, 101 ; Dr Sinclair, 119 ; Dr Bell, 122 ; Dr Gilrae, 123 ; Rev. G. Campbell, 125 ; and B.H. Hossack and S. Reid 126 each. Sheriff Thoms, and Messrs Gold, Heddle, and Davidson and others, did not finish their rounds.