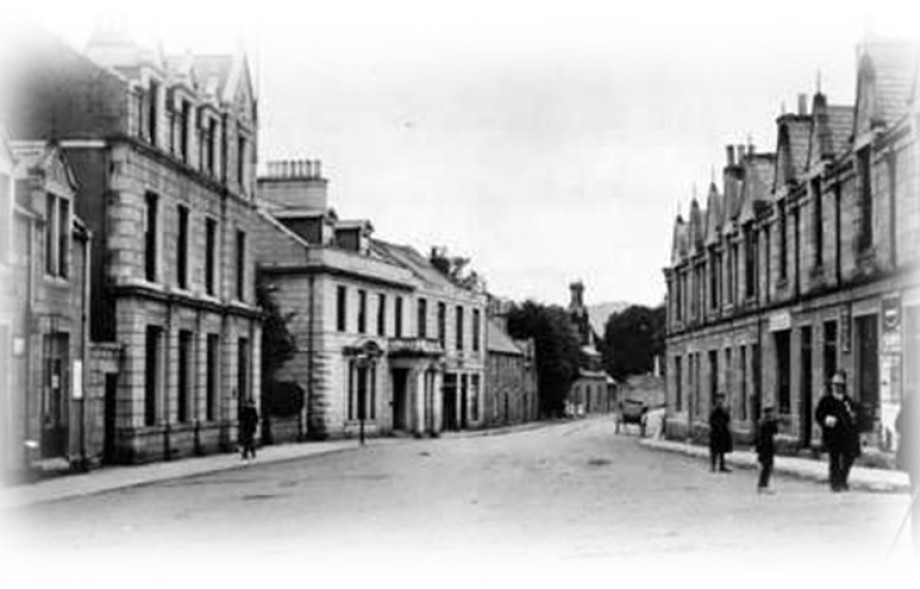 The club have been at their present site since 1982.

First Course.  “The new golf course at Insch was formally opened yesterday in presence of a good attendance of ladies and gentlemen. The course – one of nine holes – is situated about three-quarters of a mile to the north-east of the village. It is laid out to the best advantage on two pasture fields at the foot of Dunnydeer Hill, the property of Mr George Cooper, who is honorary president of the club. The first teeing ground is at the top of what is known as the Belts. The longest and best hole is close to the railway, and the driving is in the direction of the mill of Dunnydeer. For an inland course, golfers – especially the less experienced – will find that it provides ample sporting qualities. The greens are at present in a somewhat primitive state, but if they are well looked after for some time they will soon improve. The officials of the club may be relied upon to do everything in the way of improving the course. The membership of the club numbers about fifty – a most encouraging start – and there are indications that that number will be considerably increased. The president of the club is Provost Dawson, and the vice-president Dr Davidson, Mr W A Macdonald is captain, and Mr A A Middleton should prove an excellent secretary.

Provost Dawson was thankful that at last they had been able to formally open the new course as the original date had to be foregone because of bad weather. The club had been fortunate in getting a good and interesting course.The old castle of Dunnydeer stood on the hill behind, and overlooked the grounds; a very fine view of Insch and the surrounding district was obtainable. He hoped the course would be well patronised and tat it would be the means of bringing visitors to Insch. Mr Cooper, who had kindly placed the the grounds at the disposal of the club, was to have opened the course on the original date, but was now unable to attend as he was away on business. In his place was Mr Smith, of Pittodrie, who identified himself with all good institutions in the district. Mr Smith had kindly agreed to become a patron of the club, and had subscribed handsomely to the funds. Mr Smith then declared the course open and called on Mrs Cooper to drive the first ball. Mr Ironside presented her with a Driver as a souvenir of the occasion. Dr Davidson called for a vote of thanks to the ladies who had thoughtfully provided tea and cake, which were much appreciated.” (AJ 1.6.1906) 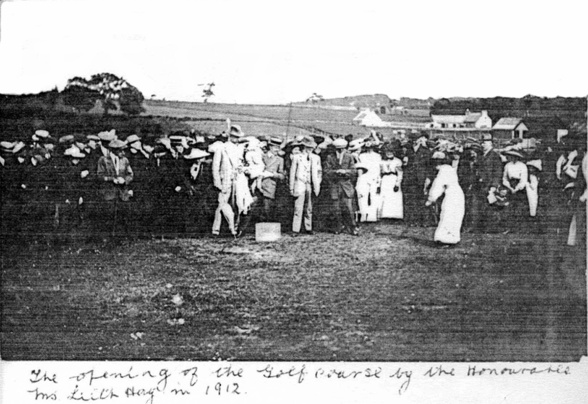 Opening of Golf Course at Insch

The new golf course and recreation grounds at Insch, Aberdeenshire,were formally opened yesterday afternoon by the Hon. Mrs Leith Hay of Leith Hall who was accompanied by Mr Leith Hay. There was a large attendance.  The ground measures twenty-nine acres, 12 ½  of which are old commontry gifted to the feuars by the superior, Mr C.E.N. Leith Hay with 16 ½  acres added from the adjacent arable land in order to complete the golf course.  This latter portion is leased for a period of fourteen years from Mr Leith Hay by the committee of feuars at an annual rental of £24.  For the fencing and improvement of the grounds public subscriptions amount to £250.  including a donation of £50 from Mr Leith Hay, and a similar sum from Colonel J.F.Beattie, Emerald Bank.  The grounds, which have been well fenced and nicely laid off abound with natural hazards and make a splendid nine hole sporting course.