"A meeting of the Avonbridge golf club was held in the School on Friday evening last for the purpose of considering the future prospects of the club. An interesting discussion took place and the following resolutions were passed :- two men were appointed for each green, to be responsible for its proper maintenance for a year, all working under the direction of the previously appointed curator of greens, Mr A. Edwards. It was decided to open the greens and course for practice as from August 4th.

A sub-committee was appointed to interview the Bathgate Golf Club, with a view to having the club publicly opened by a quartette of expert players on September 1st, and at the moment of writing it was reported that this committee had been successful in their quest.

The future success of the club depends on public support, and a cordial invitation is accorded to outlying districts to increase the membership roll. Intending members, from a distance can have all details by writing to the interim secretary – Mrs Barr, Slamannan Road, Avonbridge."   (FH 11.8.1923)

"On Saturday afternoon last Avonbridge golf course was formally opened. The course is a nine hole one, and is situated on the North side of Avonbridge, and is leased off Mr Reid, Farmer, Bogo.

The Rev. Thomas Linkie, M.A. presided, and after a few introductory remarks, declared the course open. Four players – Messrs Broom and Turpie ( Bathgate Golf Club ) and Messrs John and James Reynard ( Linlithgow Golf Club ) – played a two ball game over the course. After the game the committee and players adjourned for tea to the U.F. Church Hall – Mr Stuart, Avonbridge, purveying for the company. The committee, who have matters in hand, are sparing no efforts to make the course equal to any in the county."   (FH 8.9.1923) 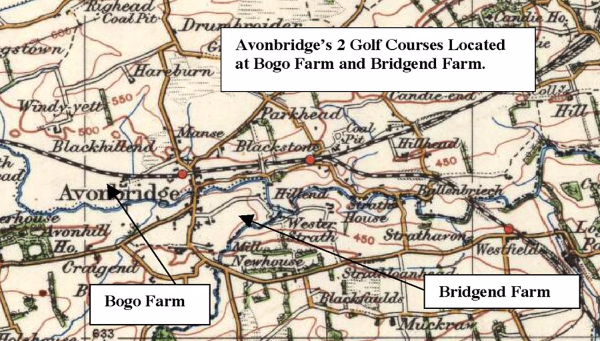 "To-day the members of the Avonbridge club bid good-bye to their course on Bogo Farm.

Next week they play over their new course on Bridgend Farm. The official opening date has been fixed for Wednesday evening, 10th August, when a stroke competition under handicap will be played for prizes presented Mr W. McHattie, President of the club. There will also be a competition for ladies on the same evening. As an additional attraction tea will be served. For what remains of the golf season temporary greens will be played on, but it is hoped to have the new greens ready for next season.

While the new course is less strenuous than the old one, the members will have more pleasure in playing over the new ground, which is admirably suited for the game. The members will leave the old course with regret, for it had many characteristic features, but are looking forward with hope to a more successful era in their new surroundings, particularly in an increased membership."   (FH 30.7.1932)

Club dissolved in 1939 and land turned over to wartime agricultural use.

The positions of Bogo and Bridgend Farms on the map are confirmed from OS 6” 2nd Edition 1913 Revision.