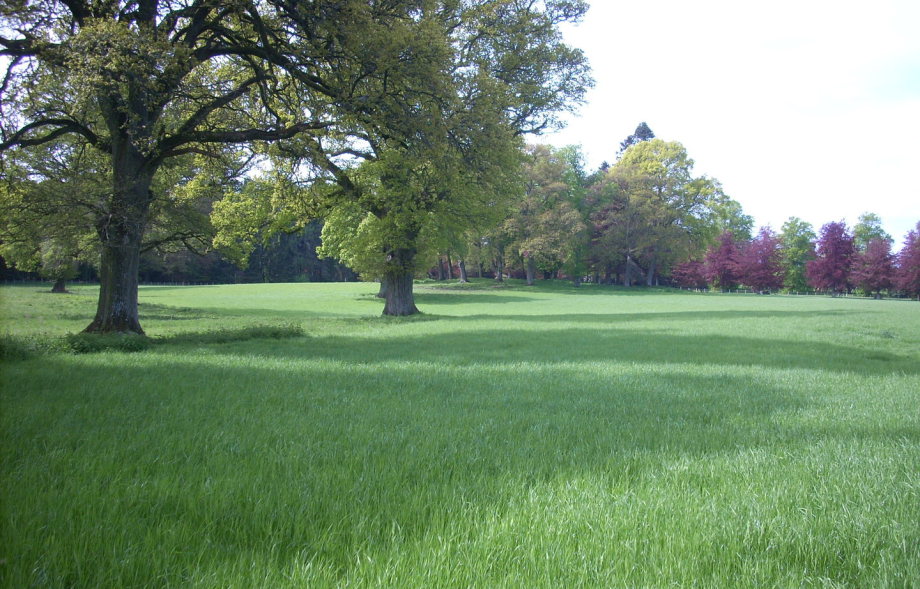 View looking over the ground which was once occupied by Ballathie's golf course.

The following private courses have been identified in Perth and Kinross:

Ardoch House, Braco. A course in the grounds, close to the centre of the village. Appears on OS 6” map, dated 1899. Does not appear in 1924 survey. 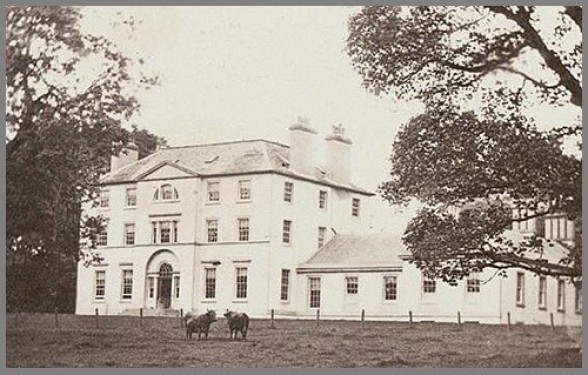 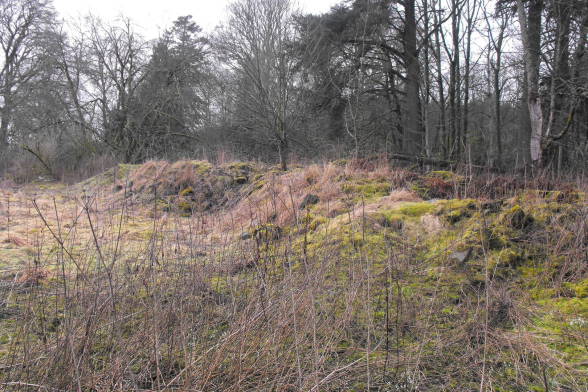 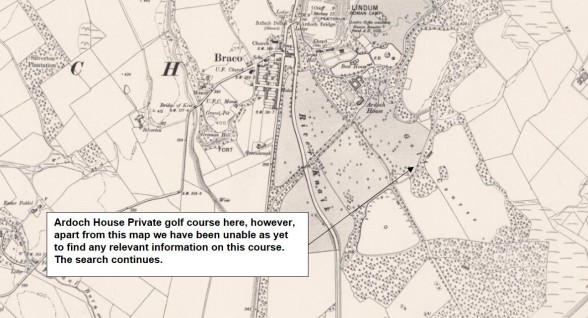 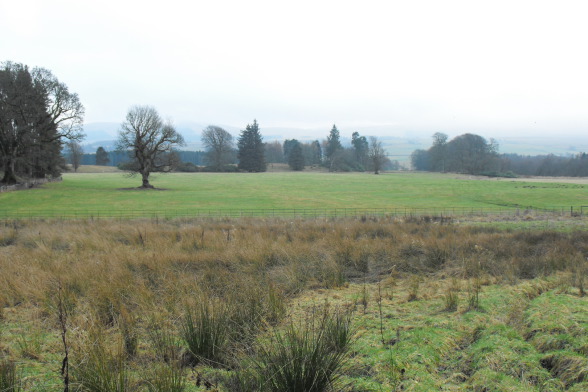 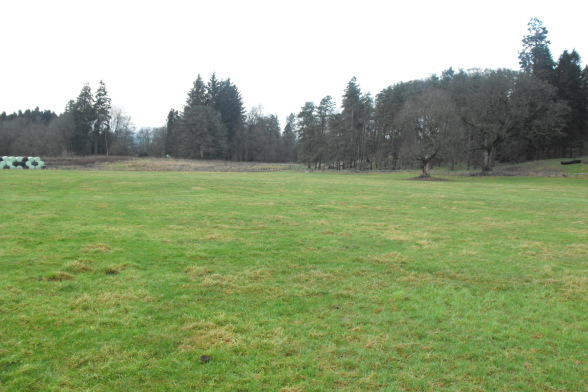 Taken from the centre of the course looking back towards the first tee and the house location in front of the tall trees.

Ballatie House, Stanley.  A 9-hole course on the lands of Sir Stuart Coates, Bart laid out by Ben Sayers Work started in 1913 and took nine months, being completed in 1914..  The course lies to the north west of the house and is bounded on the north by the Caledonian Railway and on the east by the River Tay,   (ET 28.2.1914)

Sir Stuart instituted the Ballathie Golf Challenge Cup competition, which was played for between 1920 and 1921.(GMy Jul 1912, and Challenge Cup itself.)

The course remained in use until 1939, when it was ploughed up for agriculture to aid the war effort. 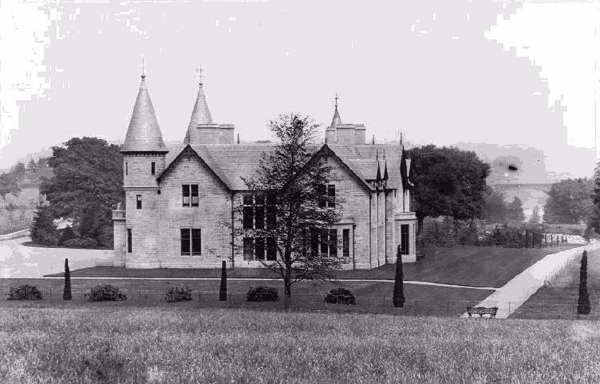 Cairnies, Glenalmond. Laid out 1919. A nine hole course, of over 3000 yards in length, laid out by James Braid at the request of the owner, Mr Maurice Anderson. It had a small clubhouse and a private teahouse 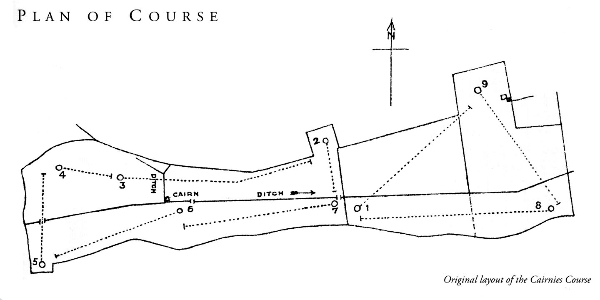 He regularly hired Joe Anderson to give him lessons, and organised an annual invitation meeting at Cairnies for leading British and French professionals.

“Some of the best known personalities who will figure in the big tournament (The Glasgow Herald 1000 Guineas Tournament at Gleneagles) were missing from the course today. Twelve of the leading professionals, including George Duncan, Abe Mitchell, Arthur Havers, James Braid, Ted Ray, Reg Whitcombe, Joe Anderson, Gordon Lockhart, J H Taylor, James Ockenden, William Ritchie and Jim Barnes, the American professional, were guests of Mr M F Anderson, the Cairnies, Glenalmond, upon whose private nine-hole course they took part in a competition he had arranged for them.”   (Scotsman, 10.6.1924)

”In 1925 Scotland represented by James Braid and Joe Anderson played `France, represented by Arnaud Massy and Jean Gassiat, who won at the 17th hole.

In 1926 Massy returned with Braid, Ray  and Anderson, Braid and Ray winning by 3 and 1. Massy amazed the spectators by reaching the 8th green (then a par 5 around 500 yards) in two shots with the clubs and balls of those days.

Theboys of Glenalmond Col;ege were allowed to play on the course, and, although  it had its own course, from 1932 the House Foursomes Competition was played on the Cairnies for a cup presented by Mr Anderson.”

Reproduced with the kind permission of the Old Glenalmond Golfing Society

The estate was puchased by Glenalmond School in 1946, and the course is now a private one for the staff and pupils. 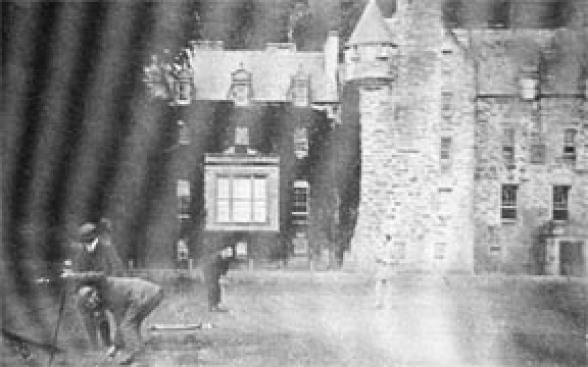 .    “When Sir Robert Maule opened the new golf course at Kinloch Rannoch last week, he challenged Kinloch Rannoch Golf Club to play a match on his own Dalriach course. (A return match was played in October.)”   (Scotsman, 2.8.1922)

“Sir Robert Maule entertained a party of 30 members of the Edinburgh Drapers’ Athletic Association, of which he is honorary President, to a day’s golf on his private course at Dalriach.”   (Scotsman, 29.4.1924)

Sir Robert died in 1931 and it is unlikely the course survived long after his passing.

"“This society, newly formed under the auspices of Sir John Muir Mackenzie, Bart, met at Delvine House, on Wednesday week, to make the preliminary arrangements and to compete for the medal presented by Sir John, to be annually competed for on the links of Delvine.

The ground, which extends along the banks of the river for upwards of a mile in length, is similar to the celebrated links of St Andrews, and abounds in the hazard which constitute so much of the interest in this national amusement.

A large party of the elite of the Royal Perth Society, also members of the Delvine Club, took part in the contest, which terminated in the favour of one of their number, Dr H B Macfarlane, who took the two rounds in 98 strokes. The party left the ground about six o’ clock, and enjoyed the hospitalities of Delvine House to a late hour.”   (Caledonian Mercury, 5.5.1842) 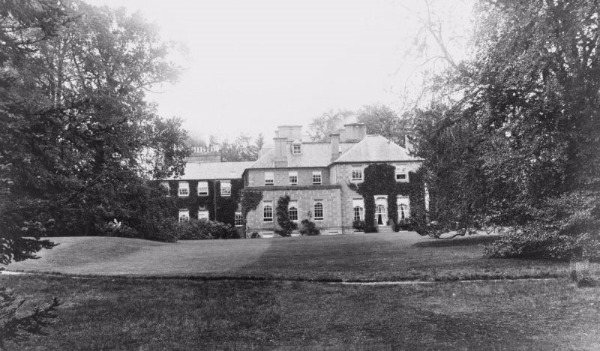 "The Delvine House Golf Society held their annual meeting at Delvine on Monday last, to compete for the medal given by the proprietor of the ground, Sir John Muir Mackenzie, Bart, and to decide sweepstakes. The elite of the Royal Perth Golfing Society, being also members of this new association, were competitors on this occasion, and after a keen contest, Dr H.B. Macfarlane and Thomas Patton, esq. W.S. both members of the former, came in equal, having taken the two rounds at 103 each.

Upon a second trial, the former came off successful, and being the present holder of the medal, retains his honours for another year. Mr Patton, of course, carried off the sweepstakes. The members were all most hospitably entertained at Delvine House."

On Monday, last week, the members of this association met at Delvine to compete for the medal given by the proprietor of the ground, Sir John Mackenzie, Baronet. Before adjourning to the playground, luncheon was served up with the characteristic hospitality of Delvine House.

After a close competition, the medal was adjudged to Dr Fraser Thomson, he having taken the 30 holes in 98 strokes. The members again adjourned to Delvine House, where a sumptuous dinner was served up.

The members of this club met on Delvine play-ground last week. To compete for the society’s medal, presented some years ago by Lady Mackenzie, Patroness. There was a considerable number of parties competing, the result of which was, Mr Ferguson Blair of Balthayock, and Mr George Condie of Perth, came in equal with 101 strokes.

Upon a second competition betwixt these gentlemen, the medal was gained by Mr Condie. After some private matches, the members adjourned to Delvine House, where they were entertained to a sumptuous dinner by Sir John, and Lady Mackenzie. 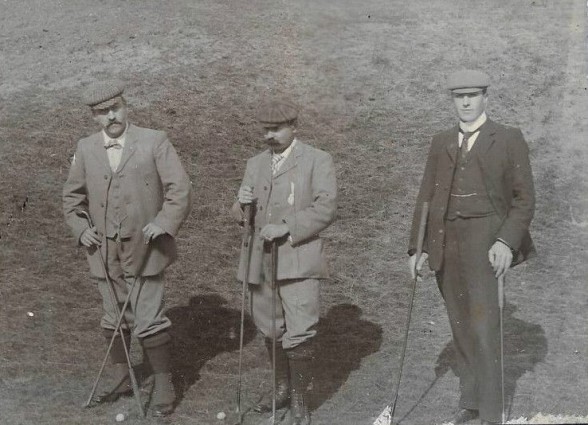 Members of lodge Scoon & Perth, No 3, played their annual competition for the Coull medal at Delvine last Wednesday, the course having been granted by the courtesy of Mr H. Hogarth. Play was abandoned due to the heavy rain. The competition will now be played on King James V1 course on Wednesday, 15th June , at 5. 45 pm."

Delvine Private Golf Course. Owing to conditions after frost, the course will not be open for play until 15th March. No further new permits can be issued."

"This course will not be available for play, as the ground has been taken over for grazing." 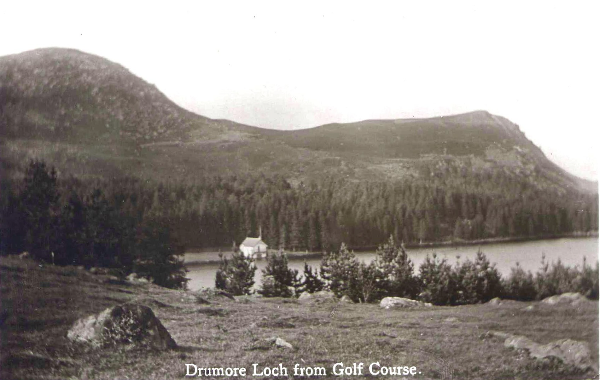 Dupplin Castle. First mention 1898. “On Saturday last, the Earl of Kinnoull entertained several friends, and members of the Royal Perth Golfing club on the newly laid out links of the beautiful Dupplin Castle grounds. This nine-holed course was laid out by friend and professional, Joe Anderson of Perth and  abounds with natural hazards.”   (Leven Advertiser, 13.10.1898) 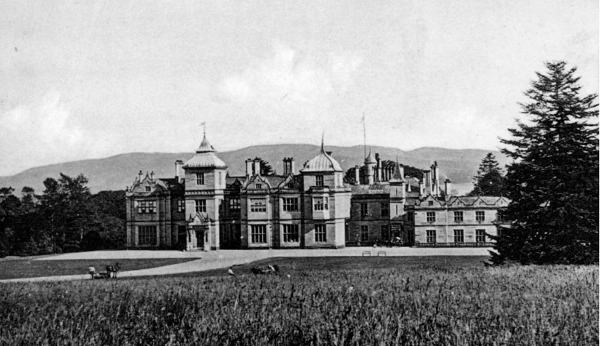 "Every week there are fresh indications of the popularity of the game in the number of landowners who are laying out courses on their estates either for their own use, and that of their friends, or for the benefit of the district generally. In very many instances the advice of Old Tom Morris of St Andrews has been sought in connection with the formation of these new greens ; and on such missions the veteran has, in the course of the last few years, visited nearly every part of Scotland.

Last week he gave Sir Donald Currie the benefit of his experience and his skill, journeying to Fortingall, which is in the immediate neighbourhood of Garth Castle, Sir Donald’s beautiful home in West Perthshire, and laying out a course there. 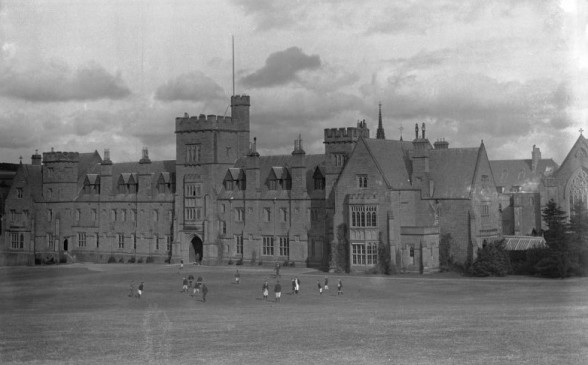 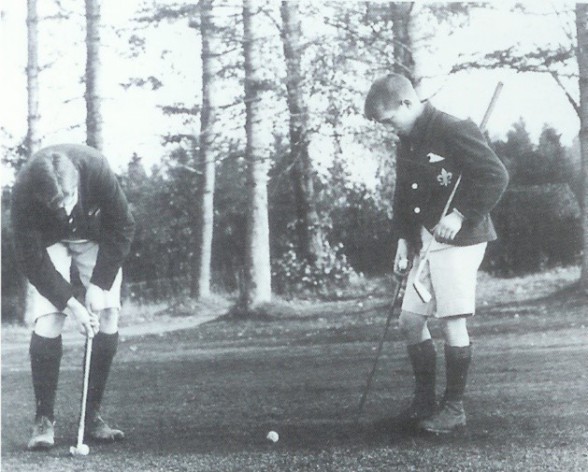 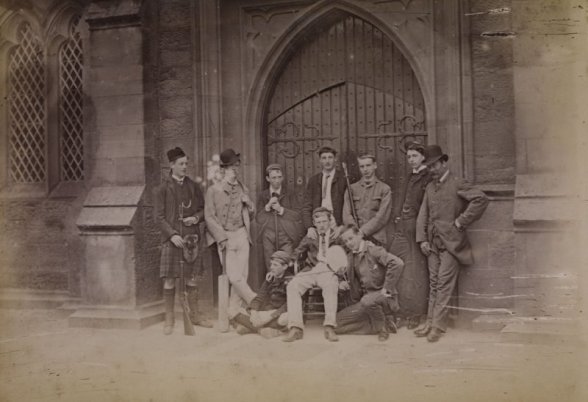 Near the “ Famous Pass of Glenlyon, with mineral well.” 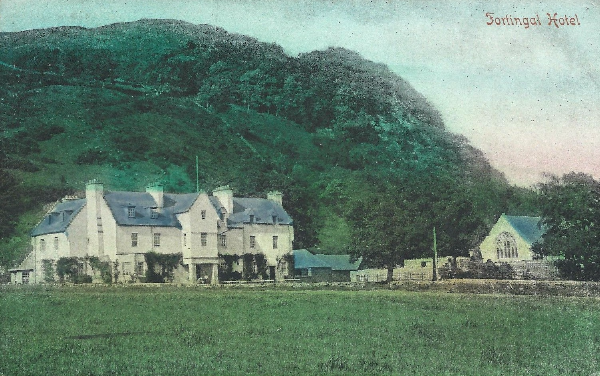 The course was laid out in the field in the foreground.

A correspondant writes us from Fortingall as follows :- It is proposed, on the Roman Camp at Fortingall, to form a golf course. The camp is a square of beautiful turf and broom about half a mile each way and bounded by the Lyon River and the public road on three sides. It is about a quarter of a mile from Fortingall village on the road to Fearnan, and within ten minutes walk of the famed Pass Of Lyon. A very circumstantial tradition assigns to this camp the honour of of being the birthplace of Pontious Pilot, the roman governor of Judes. It is said he was the son of a roman general who, while the camp was at this place, had a party with the king of the Scots by command of ceasar. It is a well authenticated fact that such an emincary was sent from Rome regarding overtures of universal peace, and it is quite possible that Pilate’s father was ambassador. Tradition does not say whether his mother was a Scotchwoman. The camp has capabilities which may yet make it one of the best, as it certainly would be one of the most picturesque golf courses in Scotland.

There are some excellent sand bunkers, and any number more could be made as the subsoil is sandy. The place is only two miles from Fearnan Pier, on Loch Tay, to which there is a service two or three times a day from Killin by steamer. There are also excellent hotels at Fearnan and Fortingall, while if preferred, lunch or tea can be had on board the steamer.

Kinross House. “A game open to the four representatives from each golf club in Kinross-shire was played over Sir Basil Graham Montgomery’s private course for a cup presented by him. The winner was E H Bruce, Bishopshire, 6 down; 2, A Duff, Milnathort, 7 down; 3, J A Marshall, Kinross, 8 down; 4, A Ferguson, Kinross and A Ireland, Milnathort, each 9 down.”   (Scotsman, 29.9.1913)

A 9-hole course on the Meiklour estate, laid out by Joe Anderson, the well-known Perthshire professional. It was ploughed up for agriculture with the onset of WW2.

Dunkeld. A 9-hole course on fields to the east of the castle (now known as the Old Golf Course), laid out in 1890 by the owner, Mr Fotheringham. The course was abandoned on his death in 1936, His son became Captain of the R & A in 1967. Source: the current owner and 14th Stewart Laird of Murthly

The grand duke Michael of Russia arrived at Murthly Castle on Tuesday evening attended by an equerry. His host, Mr Fotheringham, is a keen golfer, and has recently laid out a golf course on his grounds. Among the house party are Sir Cuthbert Slade, Bart ; Captain Murray, Abercairnie ; Mr Claud Strachan Carnegie, Colonel Lionel Benson, and Mr Gilbert Elliot.

Ochil Hills Sanatorium, Milnathort.  “The sanatorium, is in the grounds of Athron Hall, two and a half miles from Milnathort.

The private golf course of the Milnathort Sanatorium is situated behind the steading, and beyond is the farm hill on the Ochil range, rising from a height of 600 feet to 1100 feet above sea level.”  (Cowdenbeath Advertiser, 29.3.1929) 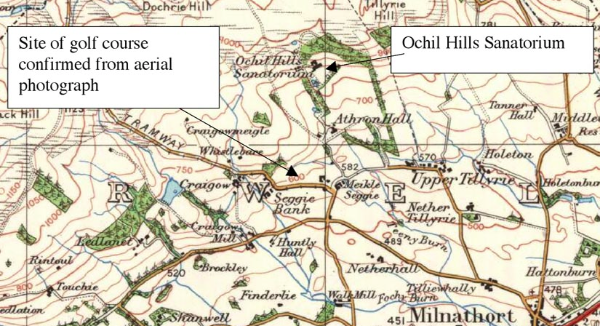 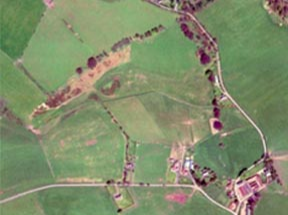 Aerial view of site of demolished Sanatorium, with traces of golf course below it.

Rannoch School. An 8-hole course in the school grounds for the benefit of the staff and pupils. Closed when the school closed in 2002.

St Martins Abbey, two miles north of Scone Airfield. “A new golf green has just been added to those that already exist in Scotland. Colonel Macdonald Macdonald, at St Martins Abbey, Perth, has, with the aid of Tom Morris, laid out a course of 17 holes in the Deer Park on his estate. The use of the green will be allowed to all members of recognised clubs.”   (Scotsman, 22.11.1883) 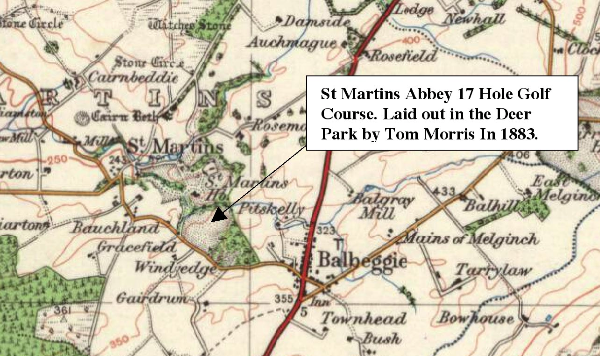