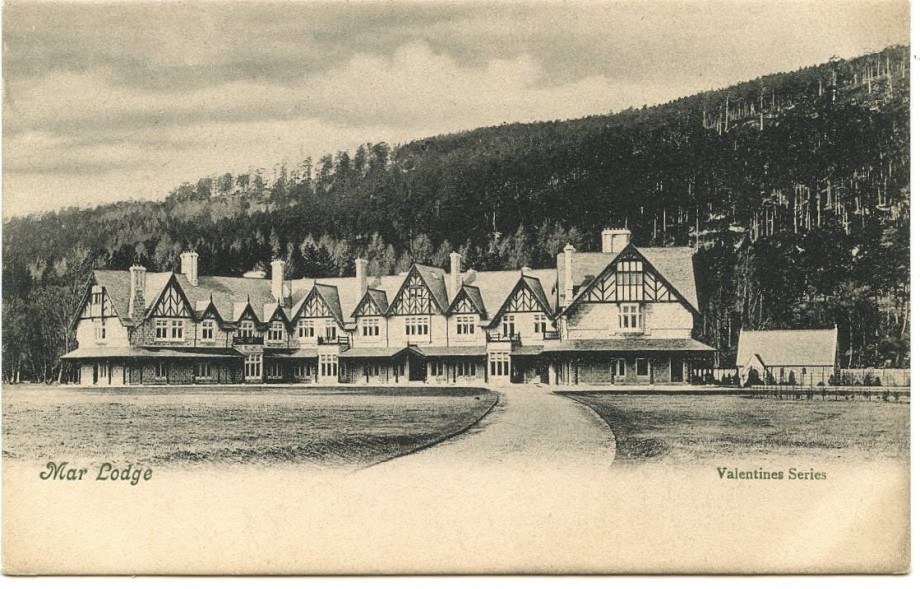 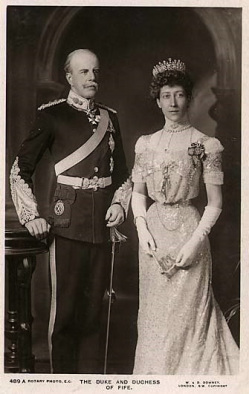 The Duke and Duchess of Fife, who took up golf at the beginning of this year, and received some lessons at the Kemptown club, Brighton, from George Harris, the club’s professional, have become enthusiastic golfers.

At Mar Lodge, Braemar, the Duke has had a fine sporting nine-hole course laid out by Archie Simpson, of Aberdeen, which he means to extend to eighteen holes, for which excellent ground is available. The present course stretches along the banks of the Dee towards Inverey, and one of the holes crosses the river, which at this point engulfs not a few golf balls.

Since August 1st the Duke and Duchess have had the services of Andrew Annand, one of the old Aberdeen professionals, as a coach, and Annand, who is a fine player with a classical style, speaks enthusiastically of the promise of his distinguished pupils. He says that the Duke has a capital swing and makes rapid progress, while the Duchess is very keen and hits very hard. Annand, on the termination of his engagement, received a silver watch and chain as a gift from her Royal Highness, while her children made him presents of dolls for his children. He speaks very warmly of the great kindness he experienced at Mar Lodge. Both the Duke and Duchess were also coached for a time by George Harris, who also became the Professional at Royal Craggan.

The Royal Craggan Club, Playing on another golf course on the same estate

The Royal Craggan Golf Club, Mar Lodge, Braemar, of which her Royal Highness the Princess Royal and his Grace the Duke of Fife are patrons, has lately been honoured by Princess Alexandra and Princess Maud becoming Vice Patrons.

The Princess Royal’s Challenge Cup was won in the May competition by Mr Ronald McDonald, the runner up being Mr George Mitchell, and in October by Mr Charles King. The runner up was Mr A. Lillywhite. The winner of the President’s Challenge cup was Mr Robert Lamont, and of the club’s gold and silver medals, Mr T. Clifford and Mr F. Mclaren respectively. Two matches were played with the Braemar golf club, which resulted in a halved match on the Braemar course and a win for the home team on the Mar Lodge course. The club has a membership of about sixty, and is strictly confined to tenants and employees on the Mar Estate and to players nominated by the Patrons and Vice Patrons. The course, which is maintained at the sole expense of the Duke of Fife, and adjoins his Grace’s eighteen hole course, has been in excellent condition, and has been crowded during the season by the members, who greatly appreciate their Patron’s generosity in the matter.

Closed due to lack of support owing to war in 1939. The Princess Royal’s Cup was rescued and presented to Braemar GC where it is competed for annually as the Craggan Cup. 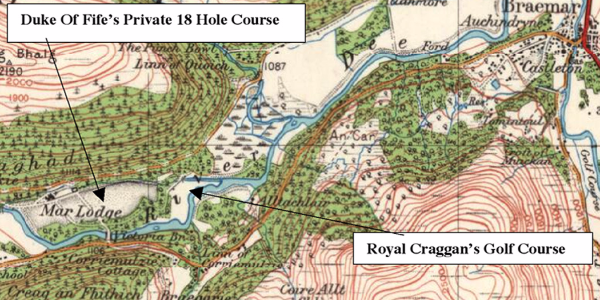 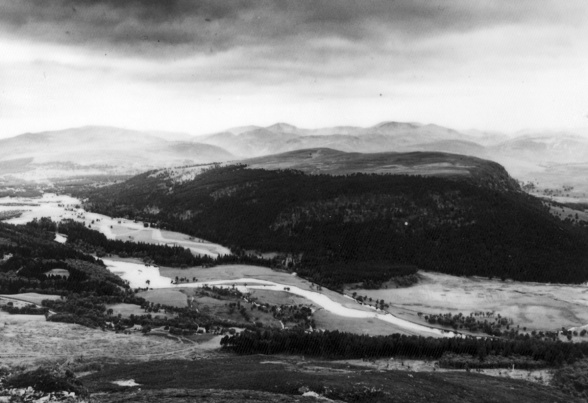 The Royal Aberdeen club has lost an interesting link with the past by the death of Andrew Annand, one of its professionals. He was attatched to the club nearly all his life, and about 30 or 40 years ago, when the members played over Aberdeen Links, Annand was in his prime.

He and Bob Mearns were then the best professional exponents of the game in the district, and they played many interesting matches over the old course against cracks from the South.

Annand had a pretty style of play, and often gave a good account of himself. His last appearance in a big match was about 20 years ago. About that time Archie Simpson came to Balgownie, and he and the late Mr L.S. Anderson, a plus player in the club, met Annand and Mearns in at least two foursomes matches over the course. In combination Annand and Mearns had a great reputation in those days, and large crowds witnessed the play.

The professional couple won rather easily the first round, and lost the second only by a hole.

After that contest Annand confined his attention mainly to carrying clubs and coaching.

He was an excellent instructor for ladies as well as gentlemen, and as long as he was able to go out to the course, he found employment, but he was often laid aside by long spells of illness, and at such times the club did not forget him, and his connection with it remained unbroken. Recently he became so weak that he could manage no more than a round of the nine-hole course.

Perhap’s Annand’s most important engagement was with the late Duke of Fife at Mar Lodge. The Duke was as keenly devoted to the game as he was to deer-stalking, and the Princess Royal and her two daughters – Princess Arthur of Connaught and Princess Maud – are also attatched to it. There are fine facilities for play in the extensive grounds surrounding the lodge – in fact, no mansion in the North is better equipped in this respect.

Annand was the first professional employed by the Duke, and he stayed a season at Mar Lodge, performing his duties in a satisfactory way. Before the Duke came North again he had engaged Mr Harris, a Brighton professional, who is still with the Princess Royal, travelling with her, wherever she goes. 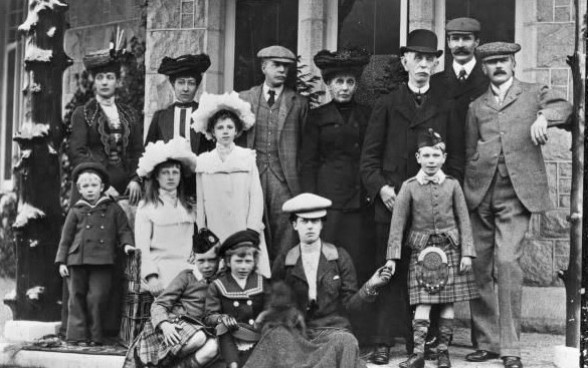 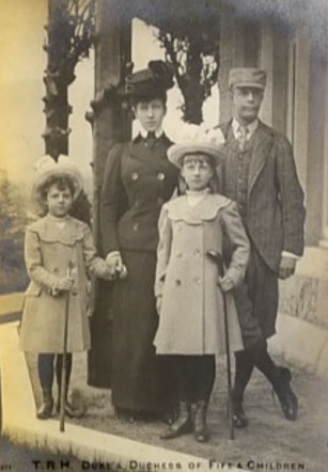 The Duke with his children, holding golf clubs.