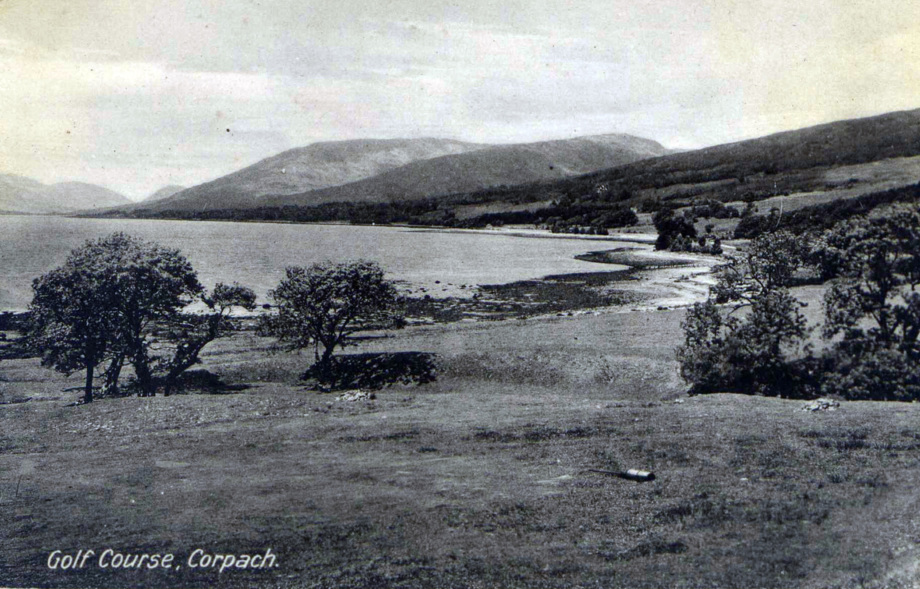 By Donald B. MacCulloch

Above the shore of the Western section of Blar-Na-h-nnit overlooking the narrows of the loch and curving round the bay where the loch opens out, there was until the second world war an attractive nine-hole golf course, called “ Rudha Mor” which was laid out in about 1905 on what had previously been pasture land and, at an earlier period, cultivated land. Indeed, when used as a golf course there were still traces of furrows or drills. This golf course was obliterated by the admiralty when they constructed a tarmacadam road along the fairway and bordered it with temporary houses on concrete foundations to accommodate the workers of the wartime small naval depot at Corpach.

After the war, the houses were demolished and the site was left in a very derelict condition. An enterprising local man, named Sutton, who had come from England, when he bought the Caledonian warehouse, Corpach, in 1950, purchased the ground at Annat and at first utilised the concrete foundations of the admiralty temporary houses for a few holiday caravans. During the “ sixties” he developed the whole area into a picturesque caravan park by excavating long stepped terraces in rising ground, on which he set about one hundred large modern caravans, providing tarmacadam roads and much landscape gardening, with the planting of trees and expanses of flowers. It is now known as LINNHE CARAVAN PARK.

Lochiel Golf Club.  Founded 1904. A nine-hole course on the edge of the narrows between Loch Linnhe and Loch Iel.

"On the lands of Annat, tenanted by Major Blackburn, on the seashore of Lochiel, a nine hole golf course has just been laid out by Willie Fernie, than whom in this line there is no golfer with more experience. The links are at Rhu Mhor, a little to the west of the narrows of the loch, and are situated in the midst of the most charming scenery.

The turf is short and crisp, and the greens have risks enough to please the keenest “gowfer.” Mr Fernie characterised the Rhu Mhor links as a delightful nine hole course. The West Highland Railway to Mallaig runs along part of the Northern boundary, and there are stations at Banavie and Corpach. At these places, too, are fine Highland Hotels and they are both within easy distance from the course.

A club has been formed, with Lochiel of Lochiel as patron ; and as the links are in the hands of workmen, the greens, which are perfectly natural, may be playable in a very short time. It is expected a formal opening will take place some time in May. The secretary can be communicated with at the Schoolhouse, Banavie." (NC 6.4.1904)

"On Saturday a new course on Rhu Mhor Corpach laid out by W. Fernie was formally opened by Captain Cameron, younger of Lochiel.  The links skirt the sea-washed shores of Lochiel and for a bit on the north side and bounded by the Mallaig railway.  They are situated in the midst of the grandest scenery that the Highlands can boast of seas, wood and mountains, the mighty Ben Nevis being the predominating feature in the landscape.

The course is a nine-hole one, and presents difficulties enough to make Fernie’s par of 80 for the double round a by no means easy feat.  Players have no sand bunkers to face but a sea-washed shingle might tempt many to destruction, and the Tugela of Lochaber is as easy to tackle as its namesake was in South Africa." (ED 20.6.1904)

"A few months ago a golf club was formed in Lochaber for the districts of Corpach and Banavie. William Fernie, the Troon Professional, came north and laid out a nine hole course on the Rhu Mor, a point of land jutting out into Loch Eil, an arm of the sea running westwards from Loch Linnhe for eight or nine miles. The club christened itself the Lochiel Golf Club, and were fortunate in obtaining as patron the chief of the Camerons. Men were set to work on the links, the land having been obtained from Major Blackburn, practically in a gift, and under the workmanlike skill of Mr Paul Cameron, Gardener, assisted by the green committee, the beautiful links took form and shape, and on Saturday the committee saw the consummation of their labours when the new links were successfully opened for play by Captain Cameron, younger of Lochiel. The Chief himself would have performed the function, but unfortunately he was lais aside from illness, and was unable to be present.

The ceremony took place about 11am, and was arranged for at the first tee. Here, a “ Guard of Honour” consisting of about fifty of the Banavie school children, was drawn up on each side of the teeing ground. Mr Honeyman, the club captain, formally introduced the young chief, who in a short speech declared the links opened for play.

Mr Honeyman then presented Mrs Everard Jones, Fassfern, with a beautiful silver cleek, bearing silver shield with suitable inscription, with which to strike off the first ball. Master Reginald Crawford, the manse, Kilmallie, teed the ball, and it was afterwards placed in Mrs Jones’s keeping by the treasurer, Mr D.R. Macgillivray. Mrs Jones, in a few gracefull sentences, thanked the club and wished it every success.

The children then sang a localised version of “ A Golfing we will Go.” Cake and wine having been served, a number of toasts were honoured, including that of “ The Lochiel Golf Club” proposed by Mr N.B. Mackenzie Jnr. A club match was then entered into, there being ten competitors. At the close, the best cards were handed in by Mr D.R. Macgillivray, P. Maclean, and G. Routledge. Mr Macgillivray was declared winner, amidst much enthusiasm, and he stands in the unique position of having won the first prize on the new links. Prizes were also awarded the second and third players.

The day, though threatening, turned out well, and the large and fashionable gathering that assembled suffered no inconvenience. The catering was excellently done by Mr and Mrs Macpherson of the Corpach Hotel" (NC 22.4.1904). 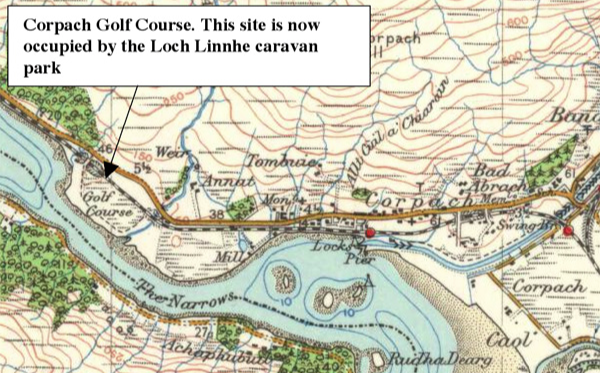 "The first of a series of three matches to be played for the travelling rug, presented to the Lochiel Golf Club by Mrs Cameron, Ravensdale, Corpach, was held on Wednesday last.  There was a good turnout of the local players and the best score of the round of 18 holes was made by Mr Joseph Routledge.  The Bungalow, with a net return of 94  Mr Ernest Wenzel and Mr D.R.MacGillivray tied for second place with 98.  The second game comes off on Wednesday this week and the final on the 21st .  On Saturday the MacGillivray monthly medal was competed for, when Mr Ernest Wenzel was returned winner with a score of 121, less 25 =96." (OT 17.6.1905)

"The new golf house will soon be out of the hands of the Messrs McNab. It is a very great acquisition to the Lochiel Club, and it’s site is a most commanding one. The club captain, Mr T.Honeyman, Clunes, has intimated two prizes which he will present for play, arrangements for which are in the hands of the green committee. On Saturday next the MacGillvray monthly medal falls to be competed for.

The season has so far advanced now that the links will be very much left to the local players, and as the winters are fairly open, play can be kept up all year round, and now with much greater comfort than here before , owing to the addition of the golf house." (OT 7.10.1905)

"Saturday 9th  inst. was the monthly medal day for the Lochiel Golf Club.  Great heat prevailed, and the players blessed the gentle breezes that whiffed now and again across the links.  True to the gradual development of his play the medal went to the youngest member of the Club Mr Callum MacCulloch, with a net score of 88.  He was closely followed by Mr Donald Cameron, 90.  The win was a popular one." (OT 23.7.1910)

"During these sunny days when to move about even is oppressive, especially if one holds to the ancient advice of “ Ne’er Cast A Cloot Till May Be Oot” a day on the Rudha Mor, the golf links of the Lochiel Golf Club fills ones being with a new sense of life. The coolness of the breeze from the six to eight knot tide that washes their shores, the Alpine scenery of the ben, and his scar-decked satellites, and the springy turf and bowling-green-like greens give to the game a zest and go that tamer links can never impart.

Scenery and ozone and smooth putting greens are but poor recompense for the duffer who runs up his score with erratic play, and whose five on the green has been attained through much tribulation, but once he gets there he can be consoled by the fact that a one, or at most a two, may see him safe." (OT 3.6.1911)