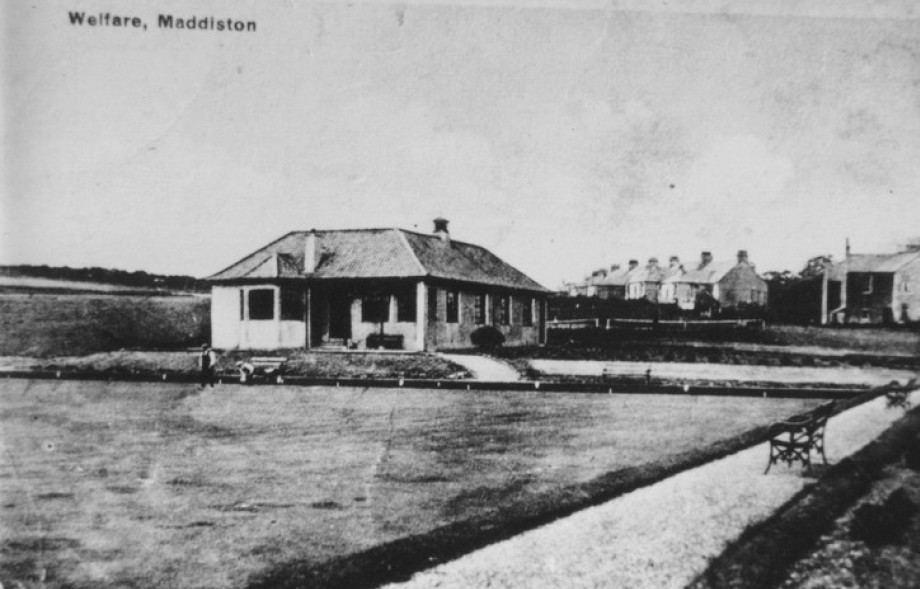 "The other week there appeared a newspaper paragraph to the effect that the only golf course in the Kingdom for miners was that in Wales, over which the challenge match between the Duke of York and Mr Frank Hodges was to be played.  More recently correspondence has shown that Wales does not stand alone in that respect, but to give Scotland its due, the miners here are just as enterprising as those in the principality.

In our own immediate neighbourhood there was opened on Saturday, to give it its official title, the Craigend Miners Wellfare Golf Course.  To many, no doubt, the whereabouts of Craigend maybe a bit of a mystery.  To say it lies between California and Maddiston, and a little over half an hour from Falkirk, maybe clearer. However, there are two easy means of communication between Falkirk and Craigend Course.  The first is by bus from Cow Wynd to California, after which a twenty minutes walk across country brings one to the course. The other route is by Callendar Riggs to South Craigs, Maddiston, and a walk of ten minutes to the Clubhouse.  Situated high up on the “Braes” there is an extensive panorams stretching northward as far as an eye can reach. Grangemouth and the Forth seem to be nestling in a valley at no great distance.  Wallace Monument and Stirling Castle are discernible to the left, while on a clear day, which unfortunately it was not on Saturday, the eye, it is said with pride on the “Braes” can pick out the picks of the Grampians. 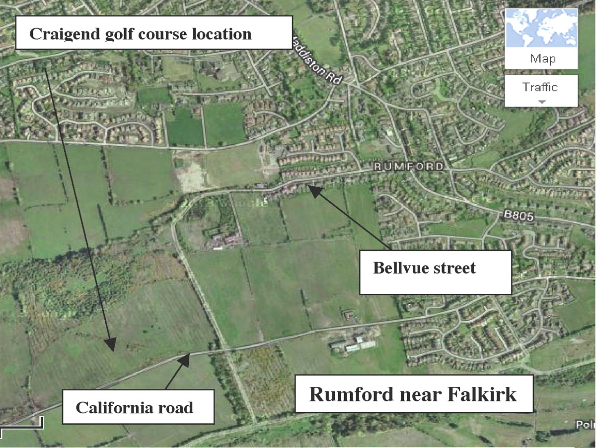 The idea of a golf course originated with Mr Calder, the late manager of Craigend Colliery, and he was so enthusiastically backed up by the miners that the effort was crowned with success.  The Miners' Welfare Scheme became the means of providing the financial necessities, and the promise of £100 gave the club a good start.  From the same source came the commodious club house.

A golf course no doubt, could not be laid out for a £100, but the energy and the enthusiasm of the members may up for the shortage of capital.  They have made the course themselves.  Trees, Whins, and other obstructions have all had to give way to the termination of this hardy son’s of toil. They have meantime a five years lease of the ground, and if it succeeds, as it deserves to do the present nine holes will be extended to eighteen.  There is abundance of ground and those in charge have no doubt the Carron Company will readily grant all they require.

The management of the club is in the hands of men who if they cannot command success, will at least deserve it. Mr David Smart, the President, is a veteran in years, but he retains all the enthusiasm and energy of youth.  His deputy, Mr Donald Torrie, the Secretary, Mr Cameron, and the Captain, Mr Thos. Bennie, are all out to make the most of the possibilities.  The recognised the need for hard constructive work, and by the force of their own example they carry with them not only the good wishes, but the active support of there fellow members

Mr Smart, in a few brief sentences introduced Mr Pate and called upon him to open the course.  Mr Pate, who was cordially welcomed said he could assure them that he came to open the Craigend Wellfare Golf Course with the greatest pleasure.  It would be difficult he thought, to think of anything that would contribute more to the happiness of the community.  Golf used to be the game of Kings ; now it was the game of democracy unlike other recreations, which had their close time, golf could be played in all seasons all the year round.  Even it were to rain that afternoon, it would not put off the match, which had been arranged.  Golf gave them an excellent training and education.  There was nothing better for anyone than the game of golf.  Summer and Winter they were stretching their arms and legs, exercising their muscles and their lungs, and making themselves fitter and happier Physically.  Morally, he thought, golf made one feel very humble.  With what high expectations one started out on the game and with what disappointment one returned.  The golf course was also a splendid place for making good friends and meeting very candid friends, and the most candid generally were the caddies.  He had the greatest pleasure in declaring the golf course open and wishing it every success.

Mr Pate then drove the first ball far and sure, from the tee, and was awarded a hearty round of applause.

As a memento of the occasion, Mr Brown presented Mr Pate with a handsome gold mounted walking stick, remarking that they were not anxious to get him away, but that it would assist him to come back often amongst them.  In acknowledging the gift, Mr Pate said he had no idea of such a thing, but he thanked them very much indeed for such a spontaneous gift.  He did not require any recognition for what he had done.  The game of golf always appealed to him, and it would give him much pleasure to come back again.

A four ball match, in which Mr Pate was partnered by Mr Ross, against Mr Smart and Mr Torrie, was then played.  The course was in parts sodden after Friday nights downpour, and the greens were somewhat difficult to negotiate, but Mr Torrie returned a very creditable 44, followed by Mr Pate with 49.  Mr Smart and Mr Torrie let by two holes at the end of the first round.

The ladies of the club attended to the needs of the inner man, and the service of tea was greatly appreciated.

There is at least one hole at Craigend which will strike terror into the faint hearted.  The “Quarry” hole must be played sure and straight.  It can be anything from a three to a thirteenth or more.  Apart from that, there is another feature which all who use it should appreciate.  The long flight of steps was constructed by the members themselves, and it must have been some job.

Any unattached golfer looking for a quiet spot wherein to pitch his camp should turn his eye towards Craigend.  There is lots of room for new members, and the annual subscription as things are nowadays ridiculously small.  First of all you have to join the miners welfare which will cost you about 10s 6d per annum, and for this mark you, you have all the privileges of the institute (and the services of a nurse if you need her).  You then pay 20s yearly for your golf, so that all told there is no entry money, and your golf and all the rest of it for 30s 6d per annum.  Communicate with the secretary, Mr D S Cameron, Rainhill, Polmont, and he will willing give any information desired.

Mr George Pate, Managing Director of Carron Ironworks is the right man in the right place at the opening of a golf course.  His little speech at the opening of Craigend was just a model.  A good story, which he related, will be appreciated outside the little circle who heard it.  “A party of golfing friends,” he said, set out for a course on the East Coast to have a day of it.  Arrived at the course, caddies were engaged.  At one of the holes was a formidable quarry.  What will I play here, one of the players asked his caddy, weel sir, I dinna think ye should play it at a! was the caddies candid reply”.

Mr Pate, besides being an enthusiast in golfing matters, is a very good player.  He is, further, a right good sport, and the match he played on Saturday was illustrative of this.  “Don’t give anything away, Donald.” He remarked to Mr Torrie, “For I am not going to” and he didn’t.  Local knowledge was, however, in Mr Torries favour, but it was a ding dong game."   (FH 17.5.1924)

It had 2 acres of ground attached for sporting activities, which included a nine hole golf course, football pitches, bowling greens and tennis curts. Situated in the middle of the village it was a substantial brick built building, which included a hall with accommodation for 250. It cost £3700, of that £2000 was given by the Lanarkshire Miners Welfare Association, the rest was contributed by the miners themselves.

The 'Welfare' was lost to the village when Smiths bought it as office space, the committee asked the people to contribute towards its upkeep (a penny a week) but they refused and so the committee went ahead with the sale.