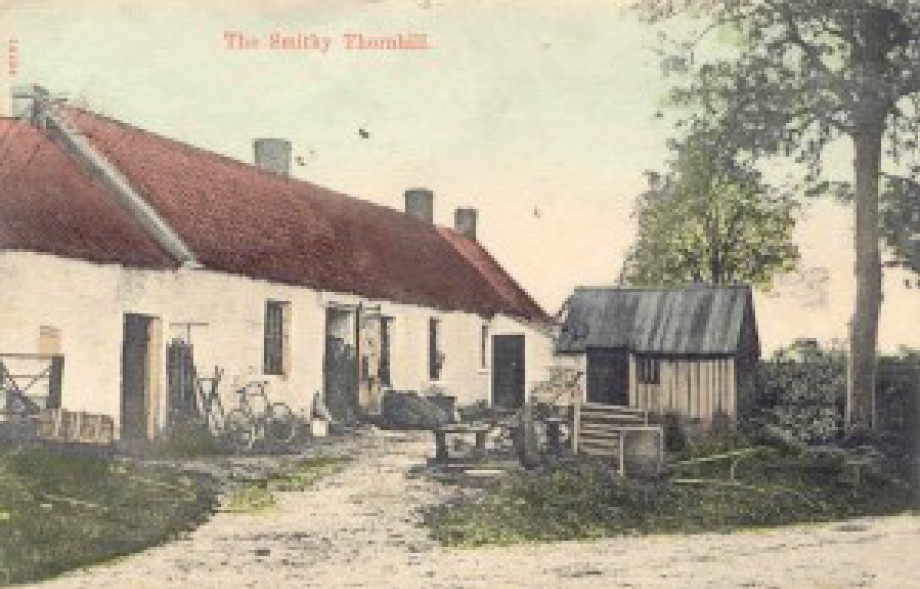 Thornhill Golf Club. Instituted 1910. A 9-hole course at Macrieston on Skeogh Brae, on the Mains Farm, part of the ancient estate of Balindornock. 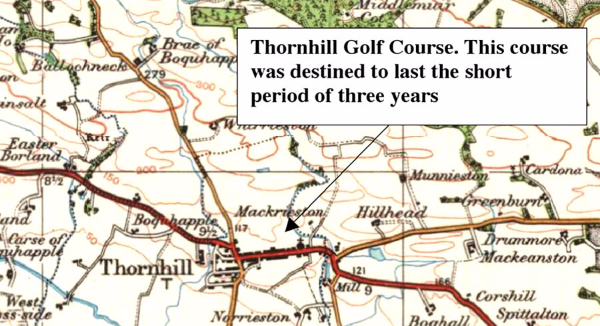 "A public meeting was held on Saturday in the public hall, convened for the purpose of forming a golf club, and appointing a small committee to secure a suitable site for a nine hole course. Mr J.G. Horne was appointed secretary, and has secured a membership already of nearly thirty members.

The committee have also been fortunate in obtaining suitable ground for the course from Mr James Forrester, Mains, on the Skeoch Brae. A public meeting will be held on the evening of the Glasgow Autumn Holiday to complete arrangements, and also at that time two experienced Glasgow golfers have promised their assistance in laying out the course. There seems now little doubt of the success of the undertaking, which will greatly enhance the amenity of the village, and draw more summer visitors"   (SJA 20.2.1911).

"A field at Macruston is to be leased from Mr McFarlane, Balochlennan, for the formation of a nine hole course. Preliminary arrangements have already been made, and the making of the greens will be proceeded with shortly."   (PA 23.2.1911)

"A most successful concert was held in the public hall on Friday evening under the auspices of the golf club. The Rev. George Williams presided over a well filled house.

The excellent programme submitted by Doune artistes was highly appreciated, more especially the sketch “ Browne With an E,” this being of the usual line here.

"On Saturday the new golf course was opened in extremely disagreeable weather, notwithstanding, great interest was shown by the villagers and those residing in the district. A large company of spectators assembled at Macrieston House, which was kindly granted by Mr and Mrs Dingwall Borland for the occasion.

Headed by piper Drummond, the company proceeded to the course, which formed part of the ancient estate Ballindornock. The Rev. Geo. Williams, President of the club in requsting Mrs James Riddell to perform the opening ceremony, referred to the antiquity and Scottish character of the game, and said it had not ceased to be Royal although it had become popular.

Thornhill had in previous years done little for the amusement of their summer visitors, and he thought the golf course would prove a satisfactory means for the visitors enjoying themselves when on holiday. It was chiefly to the energetic efforts of their secretary, Mr Horne , and of their Glasgow friends, that the course was now completed, and in order to keep it up Mr Williams spoke strongly on the necessity of members being from the district. Mr Williams also referred to the courtesy of the Doune club in agreeing to play the first match that day, which was received with loud applause. Turning to Mrs Riddell he requsted her to open the course, and presented her with a handsome club provided by the members to drive off the first ball.

Mrs Riddell having gracefully performed the task, Mr Riddell, the Captain, returned thanks on behalf of his wife, expressing the pleasure she had in being present.

The match with Doune then proceeded in miserable weather, and at the close Doune were victorious. The players and spectators were entertained during the afternoon in Macrieston House.

Mrs Hamilton, Skeoch View, and Mrs Horne, etc., were in charge of the arrangements. The refreshments were provided gratis by shopkeepers and others. At the entrances to the golf course Mr Hamilton erected an exceedingly pretty arch decorated with flowers, flags, etc, and in the centre a large placard with the words “ To The Golf Course.” A considerable amount of bunting was also displayed around the course. The course should fill a long felt want in the way of amusement and recreation to summer visitors, and prove an acquisition to the prosperity of the village."   (SJA 20.4.1911)

"We understand that through lack of local support, the lease of the golf course , which expires in March, will not be renewed."   (SJA 1913)