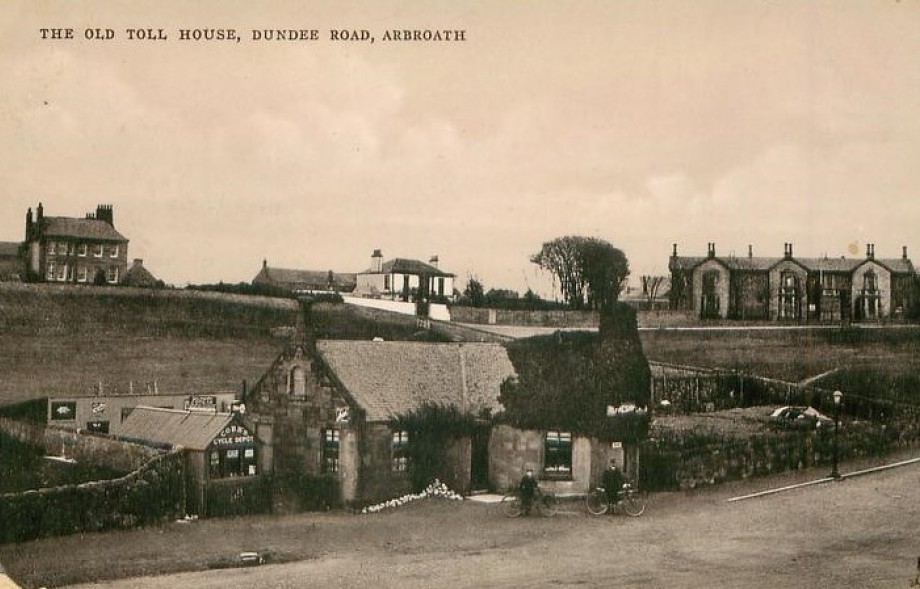 The first tee would have been behind the old toll house

In the first fifteen years of the twentieth century, there was much correspondence in the local papers about the lack of a golf course within the city boundaries of Dundee, notwithstanding the close proximity of Downfield, Monifieth and Carnoustie. Scotland’s fourth city was the only one without its own course, indeed, even most of the larger towns had courses, and there was considerable local feeling that the Town Council was minding the needs of other sports to the detriment of golf.

A typical example is:

Dundee does not possess a golf course. The nearest approach to the Royal and Ancient game is a round of a public park in a “one club” match. Lochee Park, where the game is practised, has attained the distinction of a three-hole course, and in the morning, before breakfast, many budding golfers break records – and sometimes other things. A proposal was made at a meeting of the Parks Committee of Dundee Town Council yesterday afternoon that the playing of golf should be permitted in Victoria Park between the hours of 6 and 9am. Several members raised the “bogey” of damaging the park, and the supporters of the proposal were never out of difficulties. They lost the game by 7 up and 2 to play. The bye will probably be decided at the first Town Council meeting.”          (Dundee Courier 4.8.1909)

“Dundee has bright prospects of securing a golf course.

The proposal to lay out a golf course within the city, or at least contiguous to its boundaries, has frequently been mooted, but no one was brave enough to launch the scheme, and it was allowed to lie dormant.

Now. however, Mr James S. Kerr, 3 Wellgate, comes forward with an excellent plan, which shows where it is possible to lay down a course practically at our own doorstep.

The ground which he has mapped out would also provide a public park, where games, such as football and cricket, would not be prohibited. It is bounded by the Forfar Road and Mains Loan, extending from the burgh boundary north to the Den of Mains, and while utilising a large stretch of country in the Den, it at the same time affords perfect safety for the public who wish to visit this favourite resort.

The scheme as now drawn out is, of course, not binding, but must be considered in the light of showing what might be done. The services of an expert would require to be secured to lay out the course properly, but golfers who have considered the proposal very carefully are quite enamoured of the idea. The golf course would extend to about 80 acres, and as a considerable part of the land is in old turf, nine holes might be playable almost immediately.

It is proposed that the ground adjacent to the burgh boundary – an area of roughly 34 acres – should be set aside as a playing park. A ready-made amphitheatre for viewing the games is provided by the acute dip of the ground along the burgh boundary, and here pavilions for dressing and shelter might be erected. The Park itself would be fairly level, a small hollow only existing, which could easily be filled up at practically no cost. 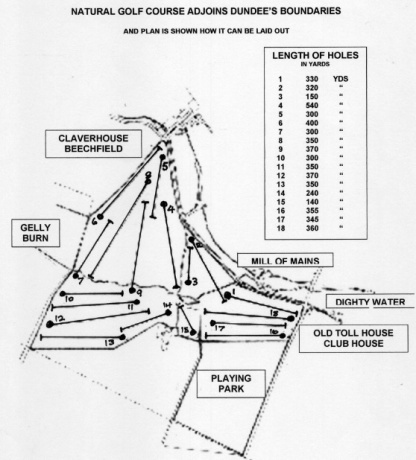 The first tee of the golf course would be at the back of the Old Tollhouse in the Forfar Road, the building being utilised as a clubhouse until found to be too small for the numbers wishing to play on the Dundee Course. the eighteenth green would of necessity be adjacent, but there is ample room for a large putting green. The plan as reproduced shows the eighteen holes as proposed by Mr Kerr, who has spared no pains in laying out his scheme to harmonise with the ground at hid disposal. But after all Nature would seem to have arranged a magnificent inland course in this part of the country. Many of the greens are already formed and need only attention by the greenkeeper to be in perfect order, while natural hazards there are in plenty. The only liberty taken with the east den is at the second hole, where the players would have to pitch across the valley through which the burn runs. The western den would be mush more utilised, and the Gelly Burn would require to be negotiated at the seventh, eighth and ninth holes. 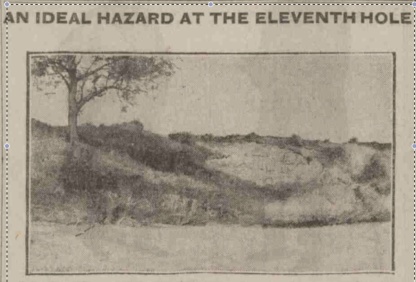 Being just outside the drainage area, the ground is not so valuable for feuing purposes. The properties which would require to be purchased are not numerous, consisting of the Old Mains Castle, which could be made into a public shelter, the Old Tollhouse and a market gardener’s premises. Mr David Eskine of Linlathen, the owner of the ground and properties has been sounded on the matter, and he is quite willing to treat with any purchases. Only one farmer would be required to be compensated for loss.

There is no doubt that a golf course so near the city would be largely taken advantage of, and it is not too much to estimate that a membership of 500 would at once be forthcoming. This alone would yield a revenue of £252, while double this sum might be got from casual golfers at a charge of 6d per round, making an aggregate of £750. Even the park might be made to become a paying concern, as clubs could be charged a small fee for the use of pitches, while if tennis courts were laid down these would undoubtedly be very productive.

Action Should be Taken

The matter is worthy of the  serious consideration of the Town Council who, after all, who have perhaps catered far too much for the bowling element of the ratepayers. They have not been so assiduous in their effort to provide recreation for the younger generation, and by providing the facilities in the playing park and on the golf course they would be conferring a boon and a blessing. Some of the wealthier citizens, too , may be prepared to contribute handsome donations towards the scheme, and in a city which can “fork out” about £4000 towards the cost of a visit of the British Association, surely it is not too much to expect that bigger cheques would be forthcoming to secure a benefit for the workers of the city.

It behoves the golfers in Dundee also to take action. A meeting should be held on an early date, when a provisional Committee might be selected to go into the whole matter. If the scheme were brought to fruition it might have the effect of enticing many of the suburbanites back to their own city.

The park and the course would be easily accessible by tramcar from all parts of the city. Even the rail-less cars would be of much service to the residents of the Fairmuir district.” (Dundee Courier  19.10.1912)

It appears that this option was never pursued. When the Downfield course was closed in 1916, there was a call for the Council to take it over, which also was ignored. It was not until 1923 that the Caird Park, with its 18-hole Camperdown course, was opened. A long wait for the frustrated golfers of Dundee.