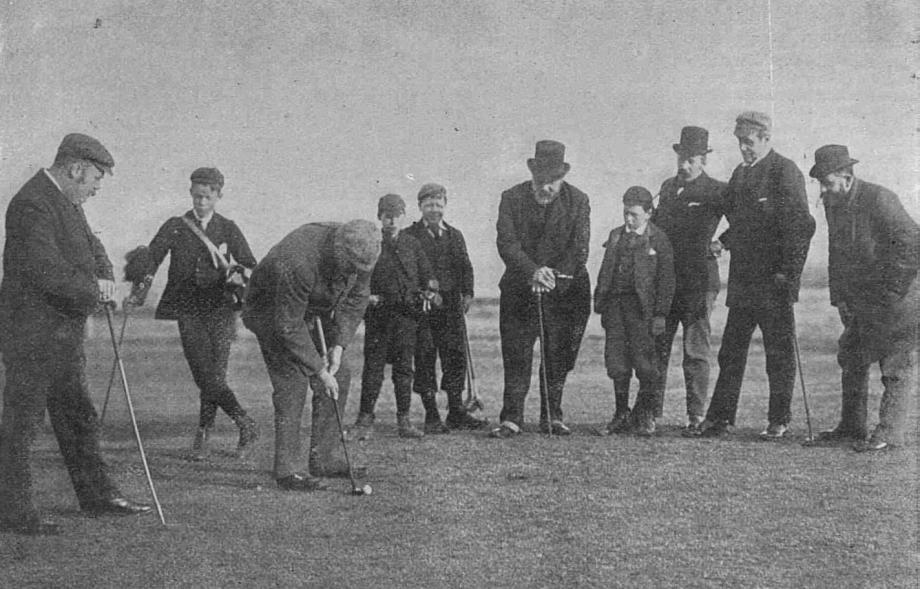 Alexander McHardy on the putting green

Sutherland Golfing Society. Golf is first recorded being played on Dornoch Links in 1616. The tradition was that monks and others from the monastery at St. Andrews introduced the game to their colleagues here. What we do know is that sometime between 1616 and 1852, the Sutherland Golfing Society came into being, but it wasn’t until 1852, when George Dempster, a golfer from St. Andrew’s, and a party of his friends played a round on the Dornoch Links that we begin to learn a little more of them. It is also known that members began playing on the links at Golspie.

The Field magazine of the time the time carried regular reports of the Society's golfing events. The edition of October 1878 refers to a competition for a silver medal presented by Dr Gunn of the Indian Army and the prizes of the President, the Marquis of Stafford. Despite the unfavourable weather on September 21st of that year, 17 competitors took part and: "A number of spectators, including lady members and their friends, turned out to witness the play, which was reckoned to be the best made at any of the Society's competitions." Two rounds of the nine hole course resulted in Alex McHardy of Dornoch winning with a score of 104, one shot clear of G Lunan, Dornoch, with G M Scott of Golspie a further two shots adrift.

In 1889 local members of the Society formed Golspie Golf Club, and so the Society ceased to operate separately.