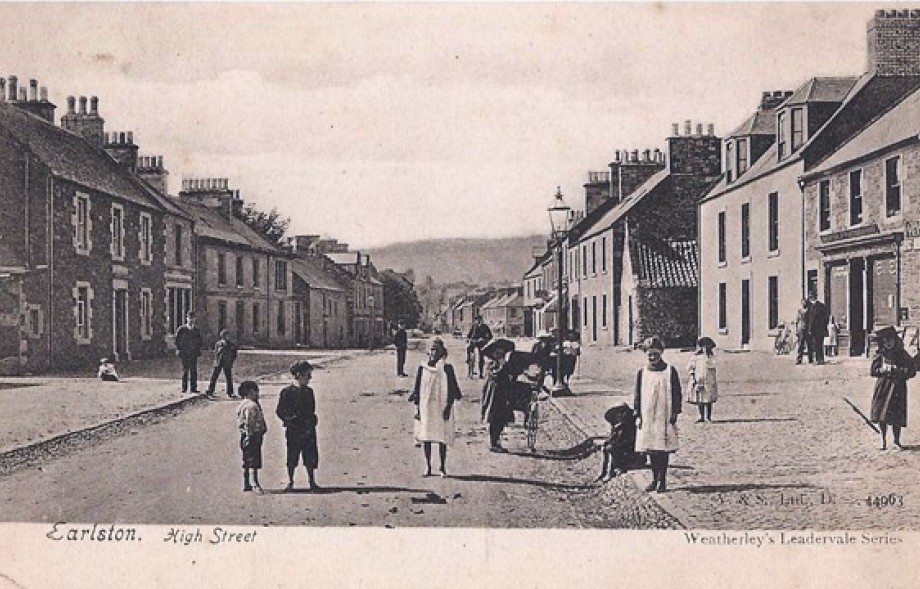 Founded 1906.  A 9-hole course on high ground on the edge of the village on land owned by Lord Binning and the course was opened on 7th November 1906. The land had a special interest of its own, being the locality where the Covenanters in the district held Conventicles during the period in Scottish Ecclesiastical history known as "the persecuting times".

The course was laid out by Willie Park Junior, who characterises it as a very good sporting course.  There is a deep gully to play over, and the shortest hole is played over a sort of quarry.  The course is on a very high field, commanding a most beautiful view, and is about 800 feet above sea level.  The larger part is on sandy soil and dries quickly.  (WWG)

The Course was closed during the First World War and was ploughed up to plant crops for food in 1917 to aid the war effort.

Between the First and Second World Wars the Course was used again, but, after WWII, there was no money or equipment available to re-open it.

In 1992, the owner of the land on which the Golf Course was originally situated applied for Planning Permission to re-open the Course. Regrettably, nothing ever became of this.

In 1998, full plans were again drawn up for the Course, but the property was subsequently sold in 2000. 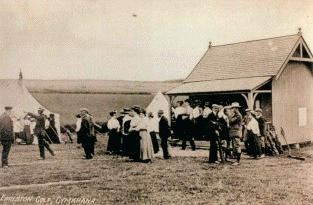 On Thursday, Willie Park, professional golfer, Musselburgh, well known to fame, went over the proposed golf course at Caldie’s Hill, and expressed his approval of the choice of the ground, which he assured the promoters of the Club was of a kind very well fitted for a nine hole course.  He was accompanied by Messrs Herbertson, Taylor, Steedman, and R.W. Smith and along with them marked out the position of the different holes and putting greens.  A meeting was held on Monday night of those who had joined or were intending to join the club, in order that step might be taken for the putting of the course into playing conditions, and for the arrangement of other matters in connection with the formation of the club.  There is great enthusiasm amongst those who are taking the lead in the matter of golfing club, which augurs well for its success.

On Saturday, Earlston Course was formally opened by Mr H.A. Martin, Factor for Lord Binning.  The course, which was inspected and laid out by Willie Park, the well-known golf expert, and pronounced by him an excellent sporting course, is of 9 holes, and is situated on the farm of Huntslaw and Toadspools- tenanted by Mr John Fairbairn of Fans and Mr James Kerr – on the Estate of Mellenstain, the property of Lord Binning, who, as well as the tenants have very favourable to the formation of the Course.  It embraces Caldie’s Hill, so-called from a farmer named Caldwell who once tilled its soil.  This bill is said (on what authority is not known) to have been the meeting-place of the Earlston Covenanters in the killing time.  It also includes a natural hollow of some depth, called The Howe o’ the Hope, where tradition says the Earleton folk hid their sheep and cattle when a division of Prince Charlie’s men passed through the district in the ’45.  From the Course a very fine view of the lower part of the vale of the Leader and surrounding district is obtained- a district rich in association with history, poetry and romance.  The author of the “Scott Country” (the Rev. W.S. Crockett, Tweedsmuir), is a native of Rhymer’s toun, and dwells lovingly on the beauties and attractions of various kind with which the Vale is studded.  Had he know of Saturday’s ceremony, he might have included in the long list of visitors, and if the opportunity had been given, he would have lifted up his voice in praise of Leader, as he has done in praise of Tweed; and Caldie’s Hill and the Howe o’ the Hope would have been fine themes for an outpouring of Border enthusiasm and perfervid eloquence.

The Golf Club musters strong, and included in its membership are about a source of ladies who are deeply bitten with the games.

The course, though formally opened only on Saturday, has been played upon for some time, and in the early morning may be seen youths “Brushing with hasty steps the dews away

To meet the sun upon the upland lawns,”

there to disport themselves with their clubs till inexorable duty calls on them to tackle the day’s work on the lower level.

The Captain (the Rev. N.C. Keith) introduced Mr Martin, and expressed to him the thanks of the Club for his kindness in coming to open the Course.  He adverted also to the strong hold golf had taken on the Earlston folk, and so health-giving a sport was it that he predicted that bye and bye there would be no occupation for Dr Young.  He thanked Mr Martin for the great assistance he had been to the Club, and all he had done to further their views.  He then called upon Mr Martin to open the Course (Applause.)

Mr Martin thanked Mr Keith for his kind words, and expressed the pleasure it gave him to be present.  He said Lord Binning was greatly pleased to do anything to encourage sport, and he therefore was quite willing to grant the ground for the Golf Course.  Thanks were also due to Mr Fairbairn and Mr James Kerr for the use of the fields.  He hoped the Club would go on and prosper, and keep continually adding to its roll by an infusion of new blood.  Golf was a grand game, a Scotch game, and one in which Scot-men excelled.  He thought the acquisition of a Golf Course would be for the advantage of Earlston by bringing numbers of summer visitors to the place.  The success of the Club was due he said in a great measure to the energetic action of the Committee with the Captain at the head of it.   He had much pleasure in declaring the Course open for play.   (Applause.)

He then drove off the first ball which was a good long drive, and then play went on, the game being a match between sides representing the Captain and the Vice-Captain.

The weather was bright and cold, and before the match was finished there was a sharp shower of snow, which compelled the latest players to betake themselves to the cottage of Mrs Dickman to enjoy the tea prepared by the ladies of the Club, and which had been enjoyed by the first comers on the green sward.  Thanks are due to the ladies who dispensed the tea- Mrs Young, Mrs John Smith, and Miss N. C. Kerr.  Valuable aid was also rendered in dispensing the tea by Mrs Dickman and her daughters.  Mr and Mrs Veitch, Mrs Wilkie, and others, to whom the large party who enjoyed the tea owed hearty thanks.  The Rev. A. B. Taylor proposed a vote of thanks to the ladies through whose exertions a great deal of the success achieved that day was owing.

Scores in the match :-

It should be mentioned that Mr Martin in his speech, referred to the fact of Earlston being well provided with amusements.  It had a Bowling club, a Curling Club, a Golf Club, and an Angling Association.  It may be added there is also an excellent Reading Room which contains a good billiard table. 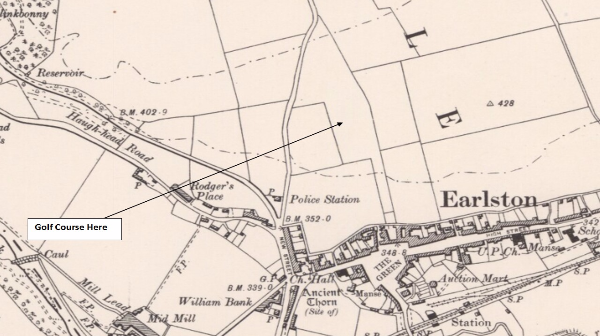 The first competition for the monthly challenge medal presented by the Rev. N.C. Keith, took place on Wednesday and Saturday.  The medal was won by Mr Robert Lountain, with 99.  The next best scores were- The Rev. N.C. Keith, 103;  Mr John Steedman, 104; and the Rev. A.B. Taylor, 106. 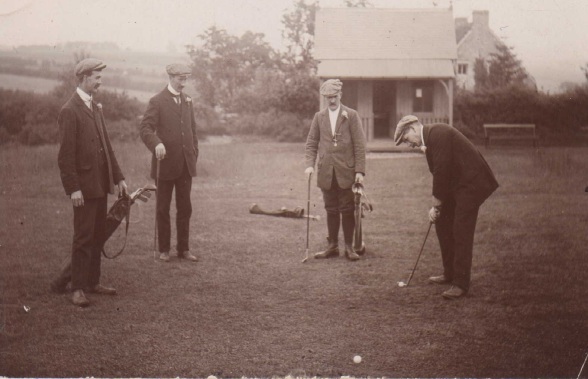 Courtesy of the lads at Earlston

The  “Keith” Medal was won by Mr George Young when last competed for.  Golf is now, since the advent of fine weather, attracting many to the new course at Caldie’s Hill, especially on the Wednesday afternoons, when the shops are closed.  A concert is to be held for the benefit of the Club.

Mr James Russell has won the monthly medal presented by the Captain of the Club. Mr R. Lountain being runner-up.  The golf course has of late been much frequented, many of the fair sex play regularly, and if assiduity can effect it, some of them will surely become accompliched practitioners.

Course re-opens after the war

Earlston golf club, which fell into abeyance during the war, when the course was ploughed up for ultilitarian purposes, has been re-organised, with the re-construction of the course. The course was publicly opened on Saturday with a gymkhana, at which Colonel Hope of Cowdenknowes, performed the opening ceremony by driving off from the first tee.

The annual general meeting was held in Lesser Exchange Hall on Tuesday, the attendance, owing to other meetings in town, being rather small.  Mr A.M. Keillor was in the chair.  The treasurer reported a small balance in favour of club.  It was decided to raise subscriptions a little to lessen the gap between receipts and expenses.  The new mower, for fairways, acquired during last season, has been a success, the course never having been in such good condition.

Earlston was visited by a team from Lauder on Saturday afternoon, the visitors being defeated by the home players by 10 matches to 1.   Details are as follows:-