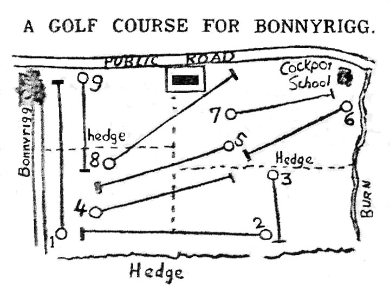 It is unlikely to have survived over-long as Broomieknowe GC, with an 18-hole course close-by, was formed in 1905,

“A meeting of gentlemen of Bonnyrigg and district, favourable to the formation of a golf course for Bonnyrigg was held in the Waverly Hotel, Bonnyrigg, last night – Mr A.W. Kitchen, S.S.C., Presiding over a good attendance. A committee was appointed to arrange with an expert to go over the proposed ground, which lies South from Bonnyrigg Railway Sation, which it is thought, would be very suitable for a nine hole course."

"A committee lately appointed to inquire into the suitability of ground in the neighbourhood of Bonnyrigg for the purpose of a golf course, convened a public meeting of the inhabitants of Bonnyrigg and district on Monday night. Provost Ketchen presided.

A report was submitted from Mr W.Park Jun. Stating that he had examined ground proposed for a 9 hole course, and he had found it very suitable. It would extend altogether to 2155 yards, the longest hole being 325 yards. The as at present was good, and with a little labour could be put into a playing condition. It was resolved by the meeting to approach Sir R. Dundas, who owns the land, as to terms."   (S 1.2.1899)