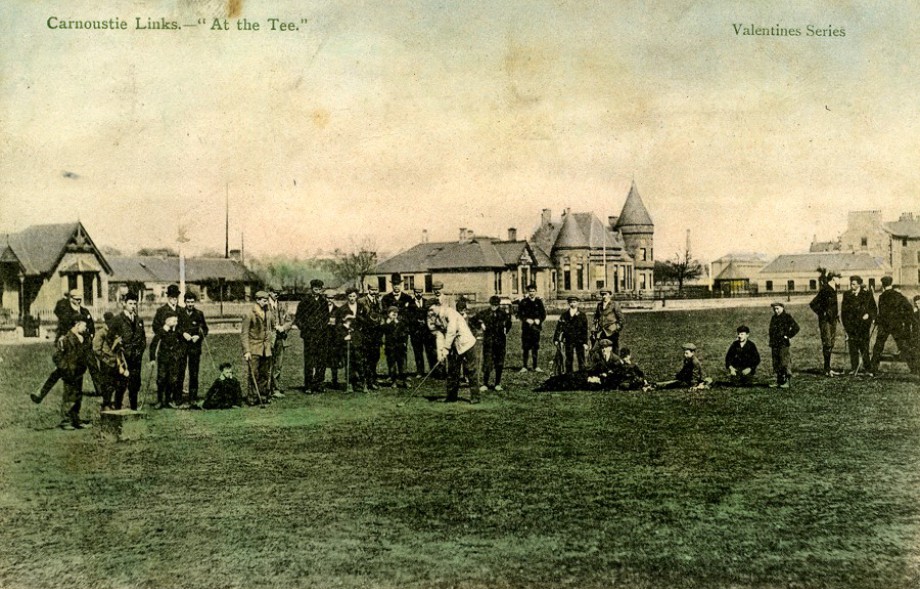 Above.  Teeing Off At Carnoustie  ( Should these boys be at School ! )

There are arguably more books on Golf than on any other sport, and particularly on the history of the ‘Royal and Ancient Game’. Many golfers are both avid collectors of these books, and are students of that history. There are few aspects of the sport which are not addressed in one publication or another, and are usually fairly readily referenced. In addition, the great majority of current clubs have produced, or will in due course produce, a club history, thus covering today’s golfing scene. The one aspect which has not been addressed, however, is a detailed examination of those clubs which are no longer in existence, but which played a significant part in the development of the popularity of golf. As will be seen, references to these clubs do exist but have never been collected together in one entity, and this is what we have set out to achieve on this site.

The title, Forgotten Greens, is not strictly accurate because a green was originally the complete physical entity of a course, including a pavilion or clubhouse; a club’s green was where it played its golf. The great majority of our entries are clubs, and there are comparatively few ‘greens’. Also, there is a section of former names of clubs, which have long since fallen out of use. So why ‘Forgotten Greens’ when it covers clubs, greens and names? Simply because we have been using the phrase for some twenty years or so, as we did our research, and through discussions and written articles, the name has become recognised.

One of our first decisions was what should be included. Since our aim was to cover those clubs and courses not recorded elsewhere, we have not included detailed information on earlier courses of existing clubs since the majority of these courses will be covered in the club’s own history, however, since not all clubs produce a history of their club or course, we have supplied a list of these courses for future reference purposes, and some we have included because, although there is a current course, it is quite different and bears little resemblance to the original, for example the Alexandra course in Glasgow.

While some information has come from books, the vast majority has come from newspaper archives, which are a mine of information and virtually the only place where such accounts appear. Many newspapers are now easily accessible via the internet, however, the vast majority of research for this book has been secured through countless visits to the various libraries throughout Scotland over a period of many years. Perhaps it is only natural that a sport so enmeshed in Scottish history should be so well recorded in the nation’s press. Items of golfing news were recorded not only locally but were included in the pages of the large regional and national newspapers, thus such as the Aberdeen Journal, the Dundee Courier, the Scotsman and Edinburgh Evening News, the Glasgow Herald and the Evening Times, regularly covered the golfing scene over the entire country no matter how small and apparently insignificant. The reports, too, were not fleeting mentions but contained much background information to the actual happening. We were faced with so much information that our initial thoughts were to precis the reports, to make them more compact, and, from the modern eye, more readable. However we soon came to the conclusion that we were, in effect, writing the first, and perhaps only, history of these clubs and the newspaper articles reflected the golfing scene as it then was, and they were couched in the language of the times. So we decided that the extracts would be included verbatim, with the source appended. We have curtailed the number of these reports in that we have included those we believe to be of major importance at the clubs concerned but have omitted the mundane if frequent reports of the results of monthly medals and the like.

The next consideration was how to detail where the clubs were located. We wanted to show, accurately, where the club was but also to show it in relation to the surrounding country. Most of the courses appear on the Ordnance Survey 6” series, marked as ‘golf links’ or ‘golf course’, but they were generally too big for our purposes, and their black and white reproductions were not to easy to read. Extracts from current Google maps afforded detail but did little to relate the subject to the wider surrounding area. We chose therefore to use the Ordnance Survey 1” Popular series which are of sufficient scale to put the subject into context. In many cases they also show the ’golf course’ but in those which do not, we have indicated where they are, having first established their whereabouts from the 6” maps, so achieving accuracy. Over the many years of my research I have further verified the accuracy of our work by walking over the actual sites of between a third and a half of the courses mentioned. Rarely is a recognisable feature not still in evidence, be it tee, bunker or green. At Tomintoul, until two years ago, there was even a roller and grass-cutting machine outside the greenkeeper’s hut !, at Crawford, and several other courses substantial remains of greens and tees are easily identified even by the untrained eye. These golfing remnants of a bygone age ( sometimes called Footprints ) have now caught the imagination and interest of the Royal Commission on the ancient and historical monuments of Scotland. The authors of this book are now engaged in an ongoing project with the Royal Commission.

Another problem was that in relying, necessarily, on newspaper reports. I was also at their mercy in relation to the extent of their coverage. It can be seen that the Press amply covered the gestation and birth of clubs, reported regularly on the competitions, but then appeared to lose some interest towards the end of a club’s life. Thus many of our entries are substantial in the early and middle periods of a club’s life but tail off, with often no account of their demise. This is simply because, as yet, we have not found the relevant  articles to complete the picture. It is likely that they exist, but will take much more research. An ongoing task.

With around 700 clubs, courses and names, we have produced a comprehensive, if surprisingly large, listing; but it is not the complete picture, since we can only record and interpret what we have found, and there are no definitive yardsticks with which to measure our work.  Not only do we have to try to complete all the stories, but we are sure that there are still more clubs and courses, particularly private ones, which have yet to emerge. After all, Chief Constable Alexander McHardy has been credited on several occasions with having laid down over 100 courses; we have only found 38 of them!