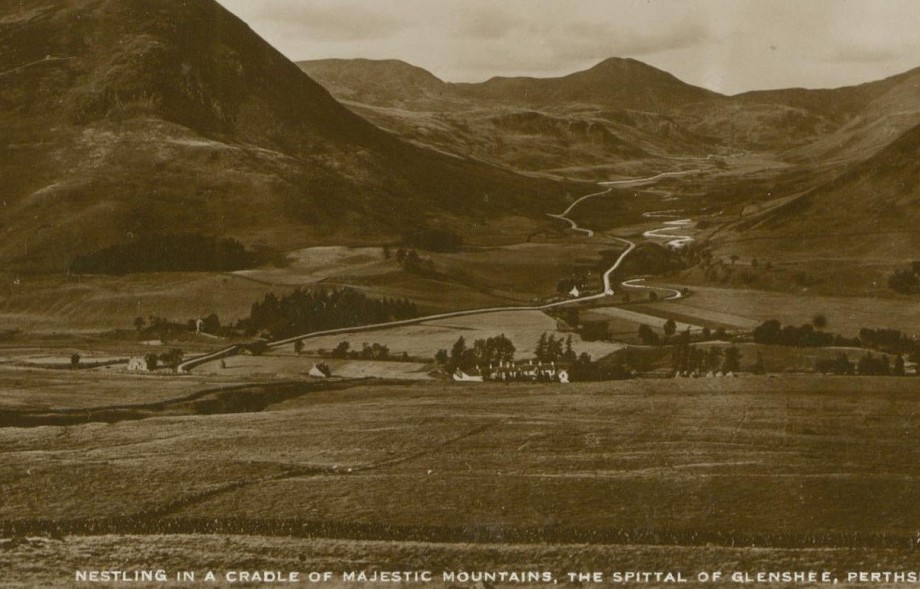 The Spittal of Glenshee Hotel, sometimes called the Invercauld Hotel.

Opening of a Highland golf course

"The Spittal of Glenshee, the half-way house between Blairgowrie and Braemar, enjoys a reputation with visitors for its clear Highland air and grand scenery. The Invercauld Arms, perhaps better known as the Spittal Hotel, is during the summer thronged with crowds of holiday-makers anxious to recuperate their jaded bodies with the bracing atmosphere of “ Bonnie Glenshee.”

Golf is now the game of the day, and to add to the attractions of his hostelry, Mr Burnett has laid down a golf course of nine holes. On Wednesday evening a party of golfers from Blairgowrie journeyed to the Spittal, and on Thursday afternoon at half past two o’clock the golf course was formally opened, Miss Spencer, Leicester, driving off the first ball. It was an interesting occasion, and one of the Blair golfers, Mr Robert Lunan, could not resist the opportunity of immortalising it with his camera.

A foursome was played between Mr J. Isles and Dr Shaw and Messrs Allan Proctor and J.D. Sharp, the former pair winning by 3 up and 2 to play. Every golf course has a record, and the golfers determined to have a record for the Spittal Course.

With that end in view the championship of the course was played, when Mr James Isles was proclaimed first champion of the course with a record score of 94 for the eighteen holes, Dr Shaw being a good second. Another foursome which followed with great interest was between Messrs T. Watson, Calcutta, and Robert Lunan, Blairgowrie, and Messrs T. Kinnear, Dundee, and J. Burnett, Spittal. The former proved their superiority in unmitakable manner by winning 5 up and 4 to play. The weather was glorious and the course in grand condition, the putting greens being voted A1.

At the supper in the Hotel afterwards Mr James Isles proposed the health of Mr Burnett and said that the Spittal had no better friends than the Blair folks. ( Applause.)

Mr Burnett suitably replied. It is expected that this fresh addition to the amenities of the Spittal will be greatly valued by its many visitors"   (DC 15.6.1895) 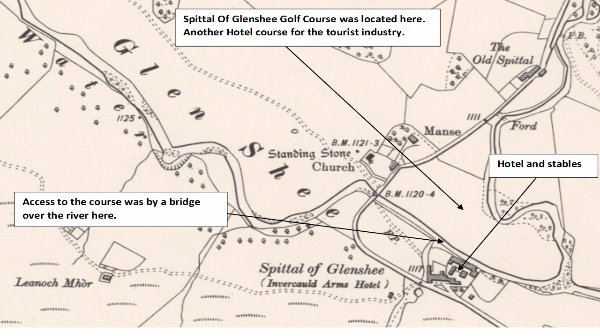 "The new golf course of nine holes, which the lease of the Spittal Hotel ( Mr Burnett ), has got laid down for the convenience of the numerous holidaymakers who frequent his hotel, was formally opened on Thursday afternoon, a party of golfers having journeyed to Blairgowrie on Wednesday to take part in the ceremony. The first ball was driven off by Miss Spencer, Leicester, Mr Robert Lunan, Blairgowrie, immortalising the same with his camera.

A foursome was then played between Mr J. Isles and Dr Shaw and Messrs Allan Proctor and J.D. Sharp, the former pair winning by three up and 2 to play. Thereafter, the Championship of the course was played and won by Mr James Isles, with a record score of 44 for the eighteen holes, Shaw being a good second. Another foursome which was followed with great interest was between Messrs T. Watson, Calcutta, and Robert Lunan, Blairgowrie, and Messrs T. Kinnerar, Dundee, and J. Burnett, Spittal. 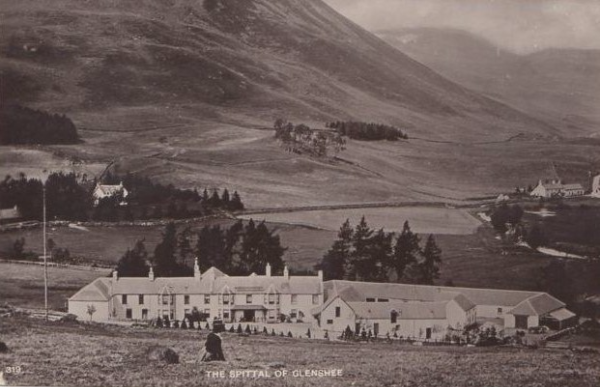