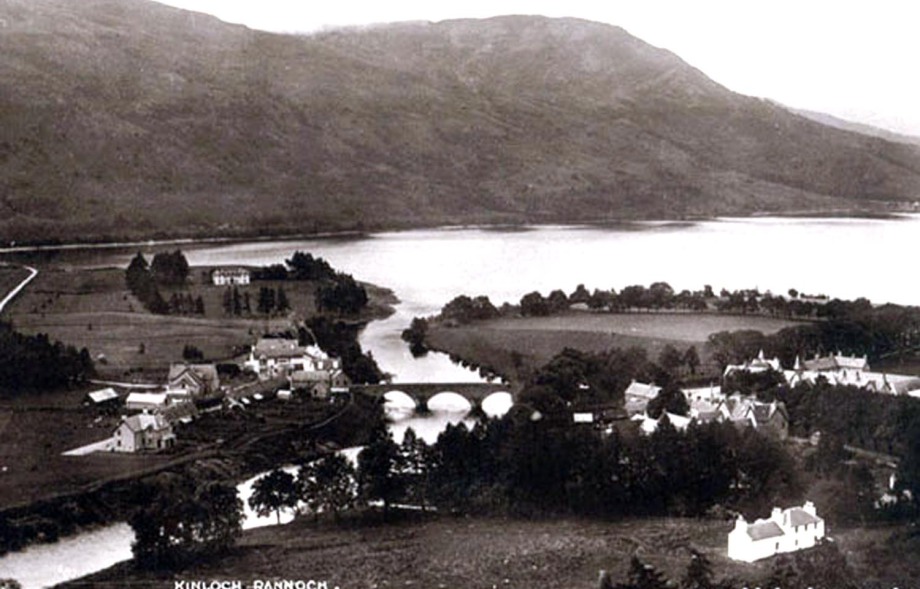 The golf course can be seen behind the houses on the left of the photo. 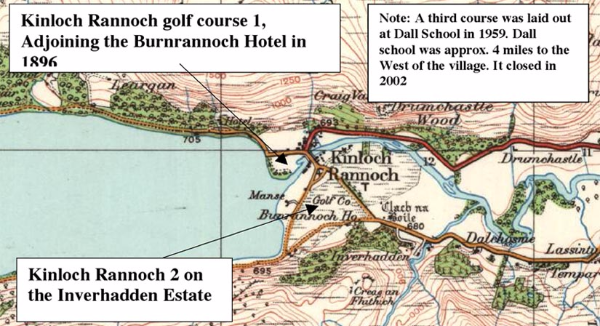 "Great interest attatched to the formal opening of the new nine hole golf course at Kinloch Rannoch by Sir Robert Maule, of Dalreoch, who has been a generous supporter of the scheme and contributed the very handsome some of 100 guineas.

The course, which meantime, is a nine hole one, but which it is hoped may ultimately become a full 18 hole links, is charmingly situated on the Innerhadden Estate, a little to the south of the village, and is surrounded by a magnificent series of mountains, with the peaks of Argyle stretching far in the blue distance. The project was only seriously taken up in the spring, and work was only actually commenced on the course in the beginning of July, so that it will be seen matters have been expeditiously pushed through. In this connection, the contractor, Mr G. Templeton, Annat, deserves credit, while in the organisation work, the active secretary, Mr Frank Elmslie, gave ungrudging service and was well backed up by Mr A. Cameron and other members of the committee. Captain A.M. Meldrum, factor on the esate was also helpful in enabling the club to secure the ground for the course.

The opening ceremony attracted a large and fashionable attendance, and took place in auspicious weather, that formed a happy omen, and Dr Mossman, President of the club, in introducing Sir Robert Maule, said he was such a sportsman that he was always to be found supporting anything that was in the interest of the public and particularly the interests of that neighbourhood. (Applause) But they must ask Sir Robert and all of them not to be too critical when they viewed their little course because there had been many difficulties to contend with, but these had been overcome for the most part. As Rome was not built in a day, so they were only making a beginning with their course (Applause)

Sir Robert, who was accompanied by Lady Maule, said it was always a pleasure to meet his old friends at Kinloch Rannoch, and to interest himself particularly in the object of their gathering there that day, which in his view , was one of the best things that had ever been done in Kinloch Rannoch. (Applause)

Ever since he came to the district 25 years ago, and made his home down the glen, he had never ceased urging such a step. Catering for visitors was the main industry of the district, and he felt quite sure, now that the golf course had been provided, that it would be the means of attracting many who previously knew nothing whatever about Kinloch Rannoch. In early days golf was played chiefly by the seaside, where they had fine turf and sandy dunes, but in recent years inland courses had become very numerous, and he thought they outstripped seaside courses in numbers now. It was said that “ An apple a day kept the doctor away”  Laughte ) – but he was quite sure that even greater health would be obtained by chasing or driving the little ball over the moor of Rannoch ( Laughter and Applause ).

They had most beautiful scenery surrounding them as they engaged in the game, and the best of air, and when once the course was in order, with perhaps an advertisement in the papers now and then – he believed that they would secure a longer season, because of the fact that the course would be the means of inducing golfers from all parts to come to the district. (Hear, Hear) He thanked the company for coming to associate themselves with the opening of the course. He wished it all success and hoped that many delightful games would be played and victories won in competition with other clubs.

In this connection he would just like to say that he would be pleased to see any of them down at his little private course at Dalreoch, and issued a challenge to play any day that week (Applaus ). He was not a golfer himself  but would be one of the foursome to show he had some interest in the Kinloch Rannoch Club. (Applause) He thanked the subscribers and the Hotel Keepers who had come forward so handsomely to support the course, and expressed his own gratitude and that of the community to Dr Mossman, Mr Elmslie, and Archie Cameron for the work they had done in establishing the course (Applause). He had great pleasure in declaring the course Open. (Applause).

Mr F. Elmslie said they wished Sir Robert to carry home with him a small gift from the members of the committee, and hoped that he would utalise it with some effect when they went down to wrest the Laurels from the Dalreoch Ground. Most games, it was said, were won on the green. They hoped their gift would inspire Sir Robert to further efforts to win more games. (Applause)

Mr Elmslie then gracefully presented Sir Robert with a very handsome silver mounted putter. Sir Robert, in acknowledging, thanke them very cordially for their gift, which he said he did not require to keep him in remembrance of his many friends in that district. On the call of the Rev. J. McClellan in a few graceful remarks, Mrs Elmslie was thanked for presenting the gift to Sir Robert.

Sir Robert afterwards drove the first ball from the tee, with a nice hit, which carried well, amid applause.

Tea was served thereafter by Mrs Burgess, Mrs Rennie, Miss A. Fraser, Miss K. Macnaughton and Miss M. McInnes, a marquee for the occasion being kindly provided by Mrs La Terrier, of Dunalastair.

"A successful basket whist drive was held in the Jubilee Hall in aid of the funds of the golf club. Thirty two tables were occupied and Mrs McGathan acted as cardmistress. The prizes were presented by Mrs Henderson, Lassintulloch. Votes of thanks were proposed by Dr McLean, the Rev. A. Muirhead, and Mr A. Stewart.

An enjoyable dance followed, with Mr John Barbour as M.C. and music by the Excelsior  Pitlochry) band."  (Perthshire Advertiser 3. 5. 1937)

Did not survive WW2.