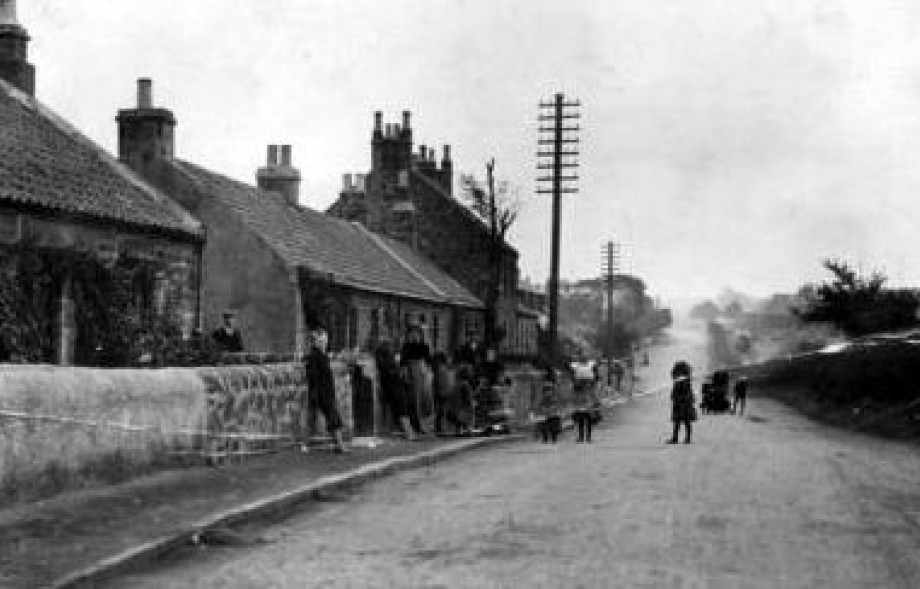 “The Golf Club has now been instituted, and officials for the ensuing year have been appointed.  The official opening of the course has been arranged for Wednesday evening 23rd April, when the first ball will be driven by Mr William Adamson MP, Secretary for Scotland.” (DJ 19.4.1924)

"The new Golf Course which has been laid out at Crossgates was opened on Wednesday evening by Mr Wm. Adamson, the Secretary for Scotland.

Mr Jas. Potter, President of the club who presided at the ceremony, said that the day was won of the greatest for Crossgates.  The Golf Course would supply a long felt want in the village. So far as the membership went it augured well for the success of the club.  Before the next winter they hope to have the new institute in the village, and thus they would be able to obtain continuity in the recreation.  As president he wanted to take as active a part as he could in the affairs of the club.  It was hardly necessary, he thought, to introduce Mr Adamson to a Crossgates audience.  It was the first time that Mr Adamson had had an opportunity of speaking to a Crossgates audience since his election to the office of Secretary for Scotland, and though that function was not a political one, they could not but accord to Mr Adamson their congratulations.

Mr Adamson thanked the committee of the club for the honour they had done him in inviting him to open the course.  He thanked Mr Potter for the kindly things he had said regarding his appointment he only hoped that he would be able to fulfil the anticipation of his constituents in connection with the office to which he had been elected.  This much he could promise, what he could do would be done, ungrudgingly to fulfil as successfully as possible the office of  Secretary for Scotland during the lifetime of the Labour government.

It was a real pleasure to accept the invitation of the committee to open the course he was glad that the enthusiastic golfers of Crossgait had seen fit to organise a club and take steps to obtain a course.  Mr Adamson thought that the fact that a hundred and forty members had been enrolled augured well for its future success.  If the committee and members keep up the enthusiasm displayed during the last two or three weeks, the club would soon become one of the finest in the district.

Golf, like other recreations, had taken a great hold on the people in all parts of the country.  They were living in a time when the people appreciated more highly than when he was young the value of recreation.  It was good for a man or a women to have some form of recreation.  Someone had said – all work and no play makes Jack a dull boy.  He thought that as a nation we had passed out of that stage, people were going in more for recreation than they had done previously that was all for the good.  He hoped that spirit was going to continue, he did not care whether the game was to be football,cricket, or golf, or angling, or some other form of recreation.  Mr Adamson expressed the hope that the new institute would be erected before the winter came.  He was prepared all he could to make it a reality before the winter.  Not only were they trying to arrange for an institute for Crossgates through the miners welfare committee, but they were trying to have miner’s institutes in every one of the mining centres in Fife.  During the last three months since he had been appointed Secretary for Scotland, he had had a varied amount of work.  One day he would be opening a school or exhibition, and the next day he had got to talk as learnedly as he could on agriculture.  Among the many things he had tried, golf was not one of them.  He had much pleasure in declaring the course open.  Mr Morton, Hon. President, wished the club all success.  Mr RH Robertson, Dunfermline, moved a vote of thanks to Mr Adamson.  Mr Adamson was presented with a driver and a ball by Miss Campbell." 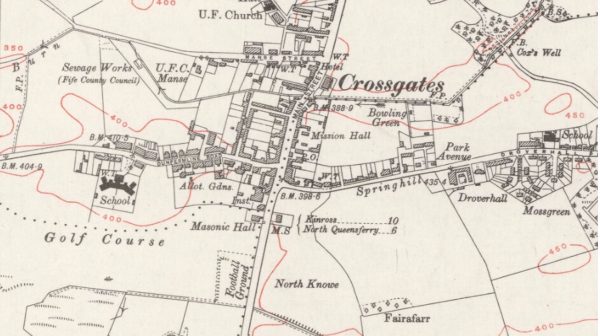 "Crossgates golf course, laid out by a newly appointed committee, is a venture on the part of prominent citizens of the village, and from all appearances success is sure to come their way. The course, which occupies one field of forty five acres, was opened officially by the Secretary for Scotland on Wednesday. Being new the course is still in raw condition, but it has great possibilities. Other adjoining fields are of the same good quality of turf and extension would be a simple matter. The club house is to situated near the old school. The length of the holes are as follows : No one, 140 yards : two, 165 yards : three, 235 yards : four, 155 yards : five, 173 yards : six, 215 yards : seven, 263 yards : eight, 215 yards : nine, 260 yards. Dykes and water holes form natural bunkers."

The winners of the monthly medal are J. Morris and Miss N. Lowe.