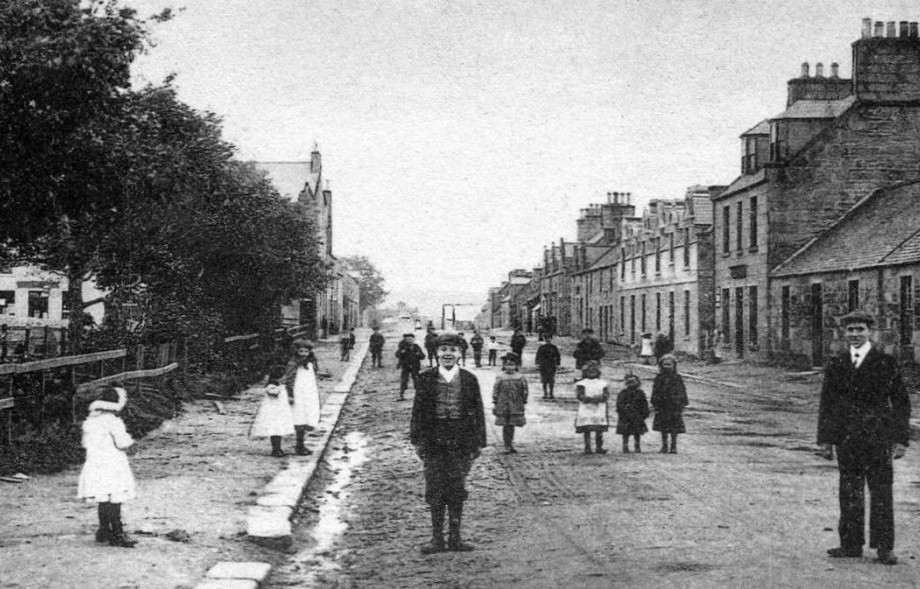 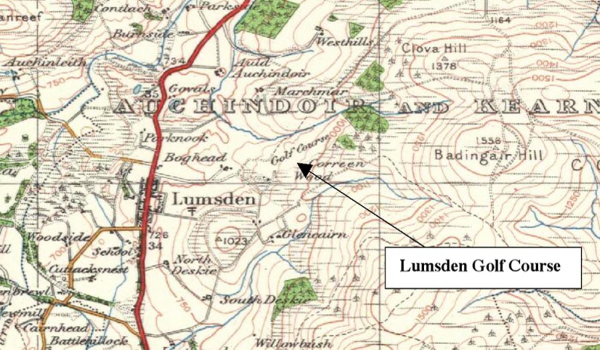 Lumsden Golf Club. Sir William Robertson Nicoll, who is a native of the village, yesterday opened a new golf course for Lumsden, the formal opening ceremony being completed by the driving of the first ball by Master Basil Miles, Sir William’s Grandson.

The course has been given rent free by the proprietor of the estate, Captain Lumsden of Clova, to the golf club, which was inaugurated by eleven golfing enthusiasts in the village with the capital of £3 17s 6d, and a subscription of 7s 6d from each member.

The Rev. John McLaren, United Free Church, said he had to apologise for the absence of their President, Captain Lumsden, and Mrs Lumsden, both of whom sent their best wishes to the club. ( Applause ). They were thankful to have with them their Vice President, Lady Nicoll, to whose suggestion and persuasion was due the presence of Sir William. ( Applause.)

He did not think that Sir William would have required much persuasion, as his affections are deeply rooted to the soil of Lumsden. ( Applause.)

As Sir William’s grandson, Master Miles, was to drive off the first ball that brought their connection with Lumsden to the fourth generation. ( Applause.) It was natural for him on that occasion to try and find out Sir William’s golfing record, so he consulted a biographical record, but could not find his handicap ( Laughter.) If Sir William had not yet got his handicap he might do so there that day. The only reference he could find to Sir William’s connection with golf was by Sir William himself in an article on Andrew Lang’s “ History of Golf” in the “ Badminton Library.” If Sir William had read that book and criticised it he would venture to say that on that evidence alone he would an authority on golf.

They were highly honoured in being able to sat that they had a prominent journalist to open their course. He thought it was unique in the history of golf to have a journalist to open a golf course. Sir William did not require to be introduced to a Lumsden audience, so he would call upon him to formally declare the course open. ( Applause.)

Sir William as a Player

Sir William Robertson Nicoll said that if he had known that the journey was going to be so adventurous and difficult, he did not know whether all his wife’s persuasion would have brought him there that day. He had a live side to all that affected Lumsden, and remembered the great kindness he had received from families there when he was a child and also as a boy. As to his golfing record, if Mr Wilson had turned up his biography in “ Who’s who” some year ago, he would have discovered that after his name came the entry, “ Member of the Neesden golf club,” and afterwards he was a member of the Hampstead club. He had played with his friend Max Pemberton, who offered to initiate him into the mysteries of the game. Further than he would not give any particulars. ( Laughter.) At any rate he went round in less strokes than the late Principal Rainy, who took 444 strokes to do the course. ( Laughter.)

As to the benefits of golf, he had a very dear and intimate friend in London who was so absorbed by business that he could not give himself a holiday. His good lady persuaded him to go to the continent, but she said he went about in continental towns like a man without a friend and without a penny in the world. She induced him to take up golf.

Since then he has become an enthusiastic golfer, the proprietor of one of the leading golf clubs, a member of the house of lords and a friend of the prime minister. He had been several times with the prime minister on the continent at conferences. He was not pleased with San Remo, and he was not pleased with Spa, because there were no facilities for golf. ( Laughter and Applause.) He must not forget the ladies, who were good golfers – some of them. ( Laughter.)

He was not going to promise that they would all become peers and Peeresses by playing on the Lumsden course, but they would find it one of the most pleasing pastimes. ( Applause.)

He was delighted that the course had been opened, and with the generosity of the laird in giving the ground for the course. ( Applause.)

He might yet be induced to take a hand in it himself. He might be tempted to do so if they continued with their handsome course. ( Applause.)

Sir William then declared the course open. Master Basil Miles then drove off a ball from the first tee. A friendly match was played between seven players of the Rhynie golf club and seven of the Lumsden club. The home side won by four holes, the result being :- Lumsden

7 ½ Rhynie 3 ½ . Sir William has indicated his intention of presenting a handsome trophy for competition among the members of the Lumsden club.

Tea was served to the company by the ladies of the village in the course of the afternoon. 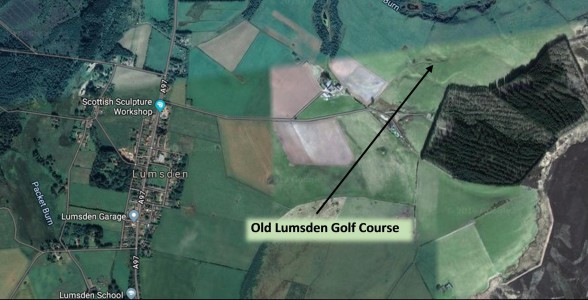 The course is one of nine holes, and the first green is well guarded by natural bunkers, the distance being 400 yards. The second and third holes have hazards of rushes, and the fourth,which is the last out, is a short hole, and is played down from the heights to the level. The fifth hole is 300 yards, the green being protected by hummocks.The fifth and sixth holes are uphill. Driving to the seventh a wide, natural bunker has to be negotiated, whilst the eighth is back over the bunker to the valley. The home green is near the first tee, and is well guarded by a dyke and several bunkers. The course is perfectly natural, and the turf is exceptionally good, as the land has not been cultivated for about thirty years. In fact, it resembles that of seaside courses. In a few years time the Lumsden course should be one of the most popular inland Aberdeenshire courses. An excellent view of the surrounding country can be had from the course, including the Tap O’Noth, the Buck and Benrinnes.

"The executive of the Lumsden club last week held an official inspection of the improvements carried out on the course during the winter months. The expense of these improvements, which included re-laying and re-turfing six greens, was met by the generosity of patrons of the club. The course was reported to be in first class condition. This course was laid out by the captain of the club, the Rev. J. McLaren Wilson, whose schemes of improvement had the approval of the well-known professional, J. MacKenzie, Ilkley. The course was opened three years ago by the late Sir William Robertson Nicoll. It is probably the cheapest laid out course in Scotland, Mr Wilson, making it playable with the club funds at £3. While there is abundance of natural hazards, the unusual width of the course assures the beginner of all necessary confidence.

The club opens its match season this month with a strong and reliable team, and a ladies team seems also to be in prospect."