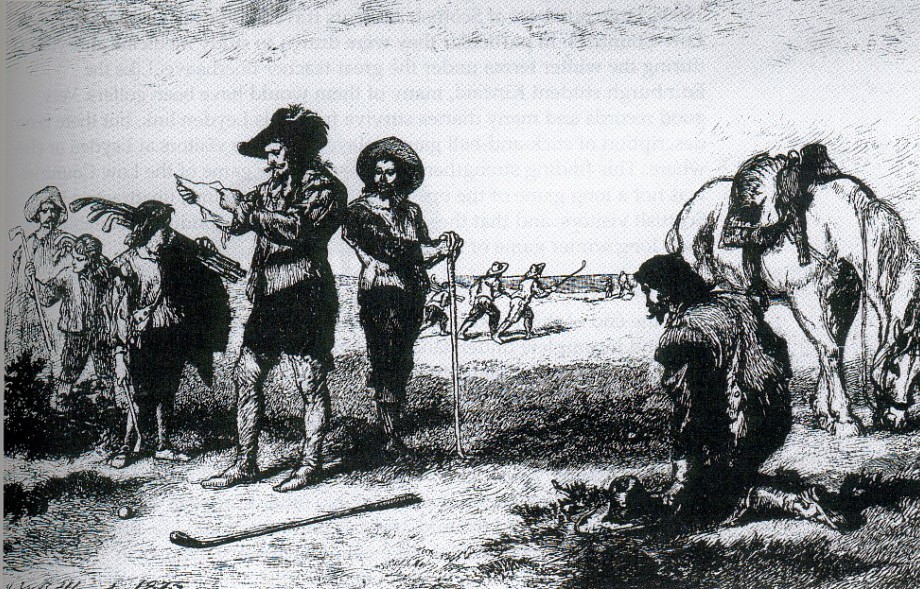 Assistance from the public and enthusiasts

I always appreciate any notifications, ideas, comments from the general public or enthusiasts about the content of this site.

Any contributions about a possible defunct golf course will be greatly appreciated,

researched, and once confirmed, entered in the site with the contributers details etc.

Aberdeenshire has been updated

Angus has been updated

Argyll has been updated

Our first notification of a defunct course was received from Mr Jim Turner of Fraserburgh, who informed us of a private golf course at Whitehillock, near Lonmay. See Aberdeens private courses for details. Our sincerest thanks to Jim for the tip off.

On a recent mission to research further the old courses at Fortingall, i bumped into a farmer with his two collies walking the fields in front of the Fortingall Hotel. The fields in which he was walking were the site of the old Fortingall Hotel golf course. I asked him his name and also if he knew anything about the old golf course. His name was Alick Slater and unfortunately he knew nothing about the course, however, after a wee blether he informed me that he was the Estate Manager of the Glen Lyon Estate and had been in the job for about a year after coming up from the borders to take up the post. He also told me that he hailed from Orkney and then dropped the bombshell on me, informing me of a defunct golf course at his homeland in Orkney. The course was at Yarpha Farm, Smoogro House, in Orphir Parish, Orkney. The existence of the course was local knowledge and he also told me that they used to find old golf balls during the ploughing season, which they just simply threw away. It just goes to show that you have to get out there and talk to people if you want to find the information. Thanks a million Alick. ( See this course in Orkney )

Although we already knew of this course, we have entered this contribution from Dougie Shaw, to whom we are grateful. Thanks Dougie.

The Golf Course on the Ferryhills from Dougie Shaw

The pathway from the Community Centre around Ferry Loch crossing the railway tunnel by scram-bling up the part of the rock face, continuing on to the water reservoir and down to the Ferryhills road has been a favourite walk for many.

The Heritage Trust is planning to have the path-way named as the ‘Ferryhills Heritage Trail’ with information boards sited at various viewing points explaining the ecological importance of the area and the historical events that took place on or are viewable from the Ferryhills including the golf course.

The views from parts of the pathway are stunning and one of the reasons why Dunfermline Golf Club laid out, on the east facing slope overlooking In-verkeithing Bay and Port Laing, a golf course which opened on the 6th September 1890. De-scribed in a newspaper article at the time as ‘one of Scotland’s finest inland courses’. Initially a nine hole course with a small wooden building acting as the clubhouse tucked away close to then newly built railway cutting which had to be expanded within two years to a full eighteen hole course at a total length of 5021 yards. The opening of the Forth bridge brought with it new membership from Edinburgh as well as from Inverkeithing and Dun-fermline. On May 20th 1897, with membership nearing 400, the original wooden clubhouse was abandoned and possession taken of Cruicks House which was hastily reconstructed to add staff accommodation and a spacious dining room. The wooden clubhouse was eventually sold to Tor-woodlee Golf Club at Galashiels for £70 having been originally exhibited at the International Exhi-bition of Science, Art and Industry in Edinburgh in 1890 and purchased by the Dunfermline Club for £200.

There were many stories and descriptions on how to play the course and the Heritage Trust aim to include some of these on the information board. During WW1 the club extended considerable hos-pitality to the ‘golfers’ of the Grand Fleet from both the many British and American ships stationed at Rosyth and St Margaret’s Bay and the trophies they gave as a mark of their appreciation are still competed for to this day. A fitting tribute, perhaps, to the world event that followed with the largest display ever seen of naval ships from May Island to Rosyth on the 21st November 1918 as part of the Great Pageant leading up to the signing of the document of surrender by the German High Seas Fleet sailing into the Forth estuary and the final closure of WW1 hostilities ten days after the sur-render of all land forces in France.

The Heritage Trust is most grateful to Dunfermline Golf Club for allowing access to and photography of the archive much of which we hope to publish in the near future. 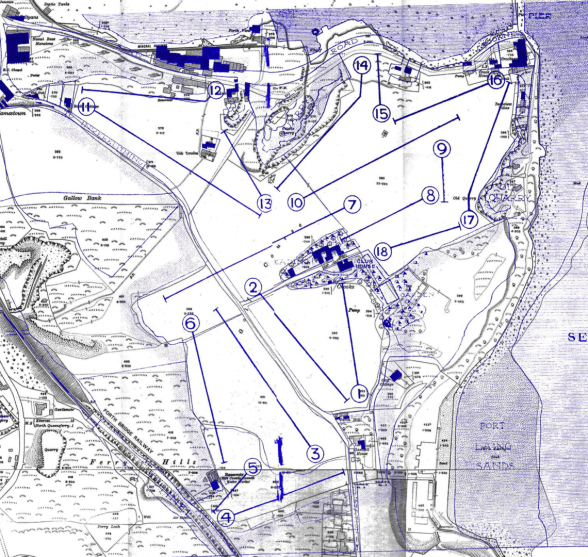 Thanks are accorded to the Rothesay golf club which i visited recently during my research at Rothesay library. ( New information is about to be entered in the site in regards to old courses in Bute, eg, Rhubodach, Westlands, Glenburn Hydropathic, Rothesay Academicals, etc. ) Although i missed the secretary ( Stan Gaston ) he has since emailed me with info and support etc, however, the prize of the day has to go to Member, Bob Liddell, who not only gave me his valuable time, but also agreed, unprompted, to copy the club's minute book which i now have in my possesion. Thanks to Stan, Bob, and all the members for being so supportive of the cause. Thanks Guys, i will be back to buy the drinks, mind you, you had some competition in regards to being helpful, the Staff at the Library were simply the best i have came across in my twenty years or so in my research into the defunct golf courses of Scotland. So, take a bow lassie's at the library, you all know who you are, and thanks a million for all your help and hospitality.

Another McHardy Course in the bag !

Thanks to Ken Galloway from Stornoway, who informed me that the first Stornoway golf course was laid out by our very own Mr Alexander McHardy, who features on this site. I have an ongoing challenge to find all of the courses that McHardy laid out in Scotland, so this additional information from Ken is greatly appreciated. Ken is a member of the Stornoway Historical Society and is currently writing an article on the history of Stornoway golf club. Remember to let me see the final article Ken, and Thanks once again.

Harry Smith from Pitemweem has kindly took the time and trouble to get in touch with forgottengreens. Harry has told me there could be a possible link with the railways and the old course at Dumbarnie in Fife. Harry has also been scrolling this site and has an interest in several of the courses, he is even trying to find additional information. One of the really interesting comments Harry has supplied is the possibility of a previous private golf course near Tentsmuir at Leuchars. This is really interesting and must be persued. Harry is a past captain of Crail and obviously loves his golf. Thanks Harry.

When I started this research many years ago it was always my intention to share all the information from my archive as I built it up. I have managed to amass many thousands of files which have been either researched in libraries or downloaded from the various newspaper archives now available on the internet. Only a small percentage of this information has been used on the web site, however, I have always made it known that any request for information from anyone who might need it is welcome. One such request came from a guy called Ronald Hugh Graham Clarke, locally known as Rif Clarke from Muir Of Ord golf club in Invernesshire. Rif is in the process of preparing a history on Muir Of Ord for their new web site and got in touch with Forgottengreens to see if I had any relevant info for him. After supplying a few bits and bobs Rif was back in touch again but this time sharing some of his findings from his own research which was a breath of fresh air to me, especially as he was coming up with stuff I had never seen before, which I greatly appreciate and find very encouraging for my own research. Rif is not only supplying information, but has actually transcribed his newspaper findings after scanning the articles ( This is Luxury for me !! ) and just think what could be achieved if a large group of researchers were active in golf history and sharing their info just like us. This was the very idea of this web site, so well done Rif, and I can’t wait to see the finished version of the club’s web site. If anyone out there has any info on Muir Of Ord then please get in touch.

Oh, and by the way folks, Muir Of Ord was the home turf of our prolific course designer, Mr McHardy.

Feedback and help from Advie estate

On a recent visit to Advie estate to see the old Advie golf course i was met by a man called Brian Milne, who showed me around the estate. The guy was brilliant and could not have helped me more, so thanks Brian. The admin staff in the estate office ( Lorraine ) who i have not met, was equally helpful and the meeting has led to the finding of further information which has still to be added to this site. See Morayshire ( Advie )

A message from Canada

Somtimes i get some feedback from people looking for information or who are just interested in golf history, but the following info has to be the most enjoyable input i have had since the site was first launched, and it is not entirely to do with golf. The information has been submitted by Mrs Ruth Thomson and her sister from Canada. This fantastic piece of information has a human element to it which has totally surprised me to say the least. To follow up on this message go to forgotten greens and choose Lanarkshire, then Symington golf course for the full story with photo's etc.

Alan Richardson for Edinburgh has informed me about the Carrick Knowe golf club. As this is a club and not a course then it does not apply to this site, however, i am grateful to Alan for his input, and of course i am aware that the Carrick Vale golf club will continue to play over the Carrick knowe course.

I am delighted that Mr Sandy Jones, former cheif executive of the P.G.A. Has been in touch and informed me about this course which i will now research. Thankyou Mr Jones.

Brian Hunter and the lads at Earlston kindy did a swap with my book ( Forgottengreens ) for a copy of their book From Huntshaw to the Moon ( The life and times of Earlston Golf Club 1906 - 2006 ) Well done lads, and they also supplied me with a photo which is now in the site. I will also enter text from their book when time permits.

Iv'e been contacted by a committee member of the Fraserburgh Golf Club ( Eddie McDonald ) and rightly chastised for not having Fraserburgh included in the site ( Sorry Guys ). Fraserburgh of course, did have an early defunct golf course at the commonty before moving to their present site after the club being resucitated in the 1880s. You will find info on this course in the Forgotten Greens of existing club's section.