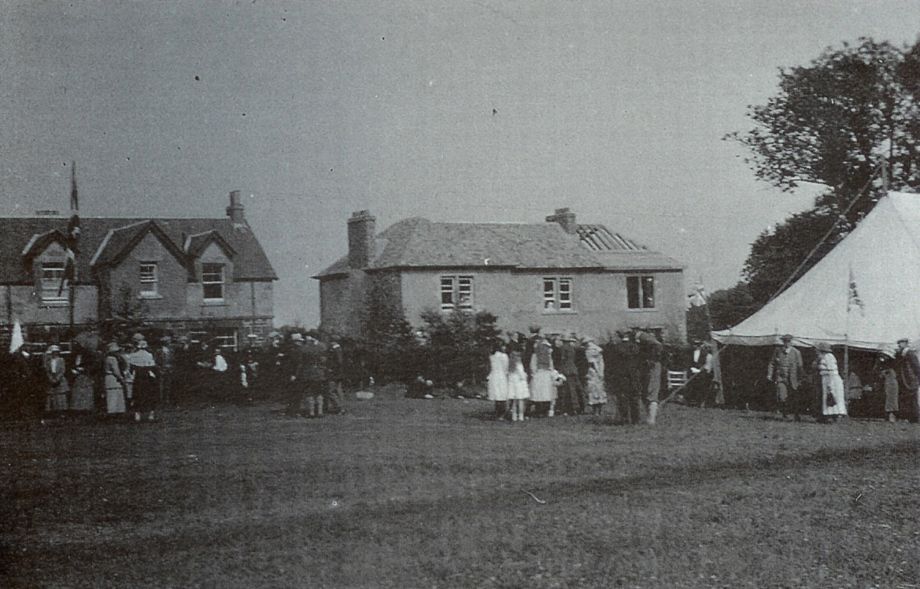 ColonelCrawford and spectators at the opening of the course 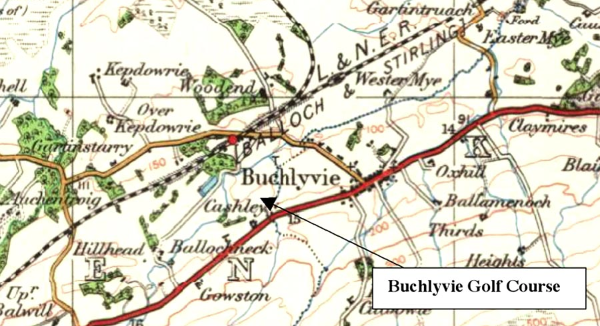 "A further meeting in connection with the formation of the golf club was held in the public hall on Monday evening. The sub committee gave their report and submitted definite terms from Mr Stewart of Cashley for the field.

These were agreed to by the meeting and it was decided that a start be made to the setting out of the holes as soon as possible. A new committee was formed to carry out the project and it is anticipated that play will begin at an early date. It is hoped that all who favour the development of this form of recreation for the village will join up and give their support, and that subscriptions will straightaway come in freely to the secretary and treasurer, Mr J.H. Clyne, teller, Bank of Scotland."   (SJA 13.4.1922)

"In respect of an early start being made to set off the golf course, an exhibition of all the various clubs, ballsand other golfing requisites is being made this week in the windows of the S.W. Co- operative society.

It is a source of wonder to those uninitiated in the mysteries of the game to see the variety of tools of which the golfer has a choice. The golfer is “ Faddy” in regard to clubs and from this fact we suppose arises partly the infinite number of shapes, and makes.    The beginner would be well advised to start with three or four clubs at most. If he aquires the control and effective use of these, he is well on the way to being a “ Gowfer.” A study of the S.W.C.S. Window this week is worth something to our “ Golfers-to-be.”   (SJA 1.6.1922)

The course will be formally opened by Col. Ewing R Crawford of Auchencroig on Saturday, 5th August, at 3 p.m.

Open competitions in putting and driving, for ladies and for gentlemen, will be held. Names of intending entrants should reach the secretary before the opening day.

A tea tent, under the convenorship of Mrs McOnie of Ballochneck, will be on the course, the entire proceeds from which are for the benefit of the club.

Free admission to the ground.

(Advertisement is Stirling Journal and Advertiser)

"The vicinity of the first tee and the last green of the new golf course wore a gay aspect on Saturday afternoon. The occasion was the formal opening of Buchlyvie Golf Course by Hon. President Colonel Euing R. Crawford of Auchentroig.

The weather was of the very best best for an event of the kind, and there was a large attendance of those interested in the district. Among those present were, Colonel and Mrs Euing Crawford and party ; Mrs McOnie of Ballochneck ; Captain and Mrs Gwenap Moore ; Captain stirling of Garden and Miss Stirling ; Mr Chas. Stirling of Gargunnock House ; Mr John Monteathof Wright Park ; Dr Macdairmid, Kippen ; Thomas Syme Esq, J.P. Kippen ; Messrs Stewart and Brown, Stirling. Etc to whom for their encouraging presence, the new golf club is very grateful.

The Rev. G.W.S. Cowie chairman of the committee, on introducing Colonel Crawford referred to him as one who had been a good friend to every object for the good of the village and community. He recounted some of the history of golf in Scotland, it’s probable introduction from Holland ; it’s growth in popularity to such an extent that parliament had to pass acts prohibiting the game, and it’s royal devotees were many from early times to the present royal family. He then called on Colonel Crawford to drive off, and declare the course open.

A tee of ominous size had been prepared ; the Colonel addressed the ball, put some muscle into the swing, and hit a jolly good shot, of which a scratch man would not be ashamed. The boys raced for the ball, and on returning it to the stiker, Master John Duff was rewarded by him with a half crown – in true “ Royal and Ancient” Fashion.

Meanwhile the Rev. Mr Cowie had unearthed from underneath the tee a beautiful silver cup, on which he placed the ball and presented it in name of the club to Colonel Crawford as a souvinir of the event. 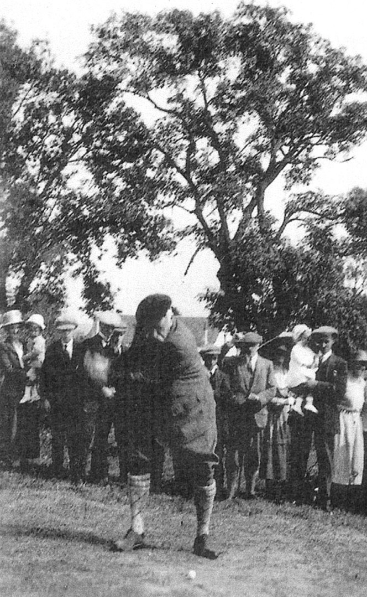 Colonel Crawford then addressed the company, expressing the pleasure it had gave him to be present and to be given the honour of opening the course in presence of such a large and interested company. He said that he was indeed interested in and always pleased to give any help in his power to everything designed for the welfare of the village. He was particularily pleased with the bold way in which the golf course had been started. The committee and members had done it all themselves without resorting to any of the frequent methods of raising money. He was all the more delighted on that account to come in and help. He thanked the club for the honour of opening the course, for the very beautiful momento presented to him, and hoped that the golf club would prosper as it deserved and the course become a boon to members of the community and to visitors alike.

Thereafter, Mr J.H. Clyne, Secretary, referred to the kindness of those who had given assistance in putting the course into playable order. He mentioned especially, Mrs McOnie of Ballochneck, who had given such invaluable help in that respect, and who had at her own expense provided the marquee and the tea for that afternoon, so that all the proceeds might be preserved for the funds of the club.

He then intimated the competitions to be held in the course of the afternoon. There was a gratifying number of entrants who performed very creditably before all the interested spectators. At the close of a most successful afternoon, the prizes were presented by Mr Cowie as follows : --