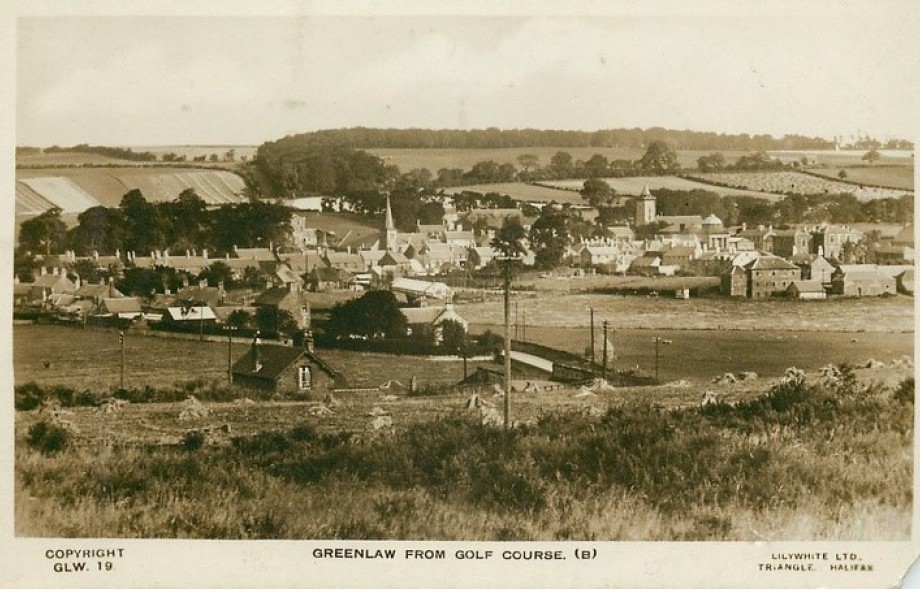 "Would it be possible to carry out the long thought or of idea of a bowling green, and by and bye to have also a golf course, say on the South Moor."     (Berwickshire News (Nov,1903)

"New golf course at Greenlaw was formally opened on Thursday. Unfortunately the weather proved unpropitious ; rain commenced to fall shortly before the hour fixed for the opening ceremony and continued persistently during the afternoon, preventing the carrying through of the programme of competitions arranged for by the committee. Nevertheless a goodly number of the inhabitants of Greenlaw and a few visitors from further afield found their way to the first tee, where the opening ceremony was performed and of these a surprisingly large proportion remained to form a “ gallery” for Mr A.R. Veitch, President of the club, who declared the course open and drove off the first ball, and he and Mr W. Burnet, Hawick, who laid off the course, played an exhibition round. The hope may be expressed that the committee may be favoured with better luck on the occasion of their forthcoming sale, which is fixed for September 5th.

Even those Greenlaw people who are not themselves players of the “Royal And Ancient” game should recollect that the possession of a good golf course is bound to prove a great asset to the town, while those in the district generally who are interested in the promotion of healthy outdoor recreation would do well to show a neighbourly spirit on this occasion.

At the opening ceremony, Rev. T.R. Thomson, Hon Secretary of the club, having intimated apologies for absence from Lady Edith Trotter, Charterhall ; Sir John Hume Campbell, Greenlaw Dene ; Col. And Mrs Menzies, Kames ; and Mr and Mrs Thomson, Lambden, went on to say that this was not a day for long speeches, but a word or two had to be said. The first word was one of a hearty welcome to Mr Veitch, who was to open the course.

He understood they were now having realised a cherished wish for some 20 years or so by the people of Greenlaw.

It was, he was informed, at least 20 years ago that a move was first made in the direction of having a course, but at that time such obstacles were put in the way that they were unsurmountable. They had now had the good fortune of having this course on the South Moor granted to them by the trustees of the late Mr Veitch. A few years ago this was a moor in the true sense of the word, and even during the last few months it had witnessed a great transformation. Much good work has been done and the result was that they had a presentable course today.

The Committee had arranged with Mr Veitch’s trustees for a lease of the course at a nominal rent for the period of ten years, but he hoped the trustees might see their way to make this lease interminable. It would be rather hard lines after all that they had done and intended to do to be told at the end of 10 years that they must go.

The course was on one of the liveliest situations in Berwickshire, and the air they would breathe upon it thoroughly fresh and pure. Finally he wished to say that their President had kindly presented to the club a challenge cup to be played for annually and has left the terms and conditions on which it is to be played for entirely in the hands of the committee. He would now ask Mr Veitch, whom he believed to be a man of action rather than a man of words, to open the course and drive off the first ball.

Mr A.R. Veitch thanked the club for the honour they had done him in nominating him as their President, an honour which he appreciated very much. The game of golf needed no recommendation from him. He had a great love for it, and no matter whether you played well or badly, it was always enjoyable. A golf course was almost a necessity to a place like Greenlaw, and through the efforts of their enthusiastic committee, and their more than enthusiastic secretary, they had now got quite a strong club. As to Mr Thomson’s remark, he could take it upon himself to sat that so long as the Veitch family had anything to do with Greenlaw Moor, there would be no change in the arrangements with the club.He had now to declare the course open with all good wishes.

Mr Moffat ( Captain of the club ) then presented Mr Veitch with a golf ball and a souvenir of the occasion, the latter taking the form of a silver golf ball, and Mr D.A. Veitch proposed a hearty vote of thanks TO Mr Veitch for coming to open the green. It was entirely through the generosity and sporting spirit of Mr Veitch that they had the golf course to-day.

The club was also indebted to the gentleman who laid off the course for them. They had not much money at their command, so instead of employing a professional they had asked Mr Burnet, Hawick, to favour them by laying off the golf course. Since it had been laid off he had on the quiet asked several gentlemen who understood something about golf what they thought of it, and they all considered Mr Burnet had made a splendid job of it.

Mr Veitch then drove off the first ball. Unlike some very distinguished golfers under similar circumstances, he by no means “ Duffed” his stroke, but made a fine drive, being well up. There was an instant race by the youngsters to retrieve the ball and James Balmer, Junr, proved the lucky one. Thereafter Mr Veitch and Mr Burnet started on the round of the course. In this exhibition game which was played under most disagreeable conditions, Mr Burnet proved victorious, returning the very good score of 36 – even 4s.

As already stated in these columns, the course is situated on the South Moor, in close and most convenient proximity to the town. On Thursday thick mist blotted out the surrounding landscape, but in ordinary weather the outlook is a most delightful one, especially towards the West. The course comprises nine holes, but is capable of extension to the orthodox 18.

The course as a whole may be classed a sound sporty one, with nothing abnormally tricky about it, while rabbit scrapes and other minor obstructions provide a sufficiency of natural bunkers. A putting course has been laid out at the old carting pond near the fourth green.

Tea was served at the carting club’s premises of which the club has the use, by a committee of ladies – Convenor – Mrs D.A. Veitch. The unfortunate weather conditions were much against their efforts, but those when entertained there, found the catering most excellent.

We understand the club has a membership of about 80, including a large number of ladies. The annual subscription has been fixed at the moderate sum of 10/6d, and a reasonable tarrif for daily, weekly, or monthly tickets for visitors has been arranged for.

Mr A.R. Veitch, Berwick, President of the Greenlaw Golf Club, who took part in the opening match, informed the “ Berwickshire News” representative that the course was good, though, naturally, still rough. In a short time it would be a really 1st class course, especially when lengthened to 18 holes"

'I am glad to hear that Greenlaw Golf Club has been resuscitated, and I hope the club will soon be in full swing again. The resucitation has been made possible as a result of Major Mobray having made the former course available for play. A.M. Shell is club Captain"

"Greenlaw golf course has now been reopened for play, the work having been carried out by members of the resuscitated club, which has now forty members and it is hoped that this number will be increased. The committee makes a special welcome to beginners.