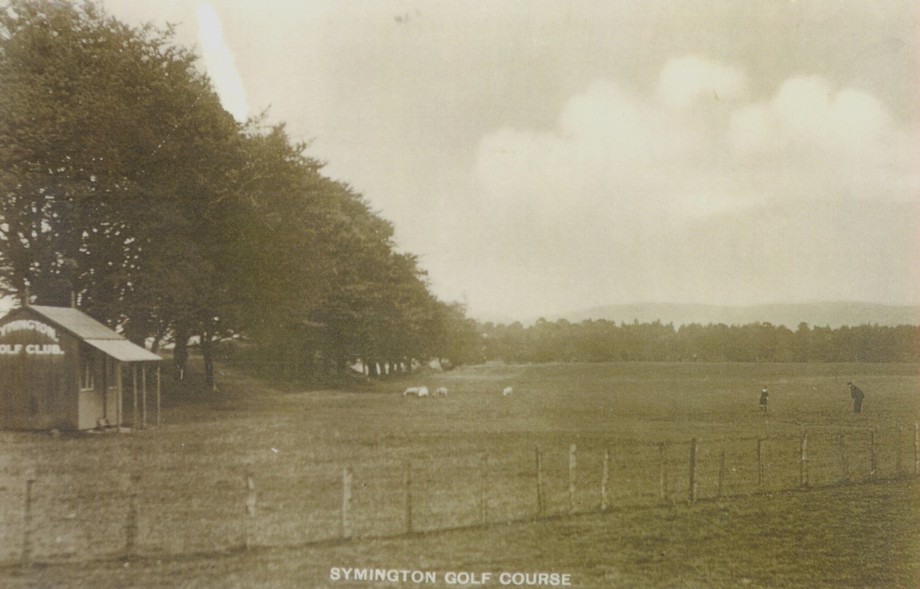 "The annual meeting of the club was held in the school on Friday evening 6th inst. - John Mann esq,. presi­ding. The secy read the financial statement for the year, showing a balance of £8.8/-, the membership being 55. It was agreed to erect a clubhouse, with the view of extending the course at an early date.

"The annual business meeting of the club was held in the club house on Sat 6th inst. W.K.Jackson, esq in the chair.

The first business gone into was the secy's report for the previous year. The nuber of ladies joined was 27, and that of gentlemen was 79 ; and 27 joined over this number and paid for a week - the total number in all being 133.

The accounts showed the club free of debt, and a substantial balance carried forward. Considering the upkeep of the greens, the procuring of a clubhouse, and also a good roller, the club is to be congratulated on its success. The following gentlemen were elected office-bearers ;

The monthly medal presented to the club last season by the cap­tain is to be played for in July by the winners of 1906. The lowest score is to be the winner. This season the club supplies the monthly medal for competition. The first comp for same starts on Sat. 13th inst. John Mann is giving prizes to be competed for by the ladies, and also prizes for boys up to age sixteen.

The gratitude of the club was expressed by Mr McCulloch in a few well chosen words to Mr Jackson for his generosity in granting the ground free to Symington for their golf course. Mr Jackson re­plied by saying that he felt well repaid when he saw how heartily all and sundry joined in the game, and how thoroughly young and old enjoyed it, and at all times it was his earnest desire to further the advance and the good of the people of Symington."

" The annual business meeting of the club was held in the clubhouse on Friday 16th inst. - W.C.Martin esq. Carlton, in the chair.

The secy was asked to read his report for last season, his books showing a substantial balance and the club in a prosperous condition.

Mr Wm Brown was the winner of last seasons monthly medal, this being the second year it has been won by him. Rev J.M.Miller spoke of the great boon the course was to Symington, and the goodness of Mr Jackson in giving same free of charge. A hearty vote of thanks was accorded to Mr Jackson, who suitably replied."   (HA 24.4.1909) 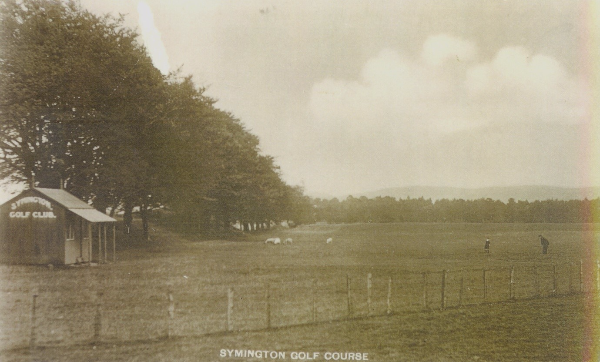 This course is still intact.

"The annual business meeting of symington golf club was held in the clubhouse on the 10th inst. when Mr Wm K Jackson, President, presided. Sederdunt: Messrs McInnes, Aitken, J Marshall Brown, S Jackson, Laing, Plenderleith And Hamilton. The minute of the last general meeting being read and found in order, the secretary was asked to read his report, which showed a balance of one pound eight and sixpence for season 1913. 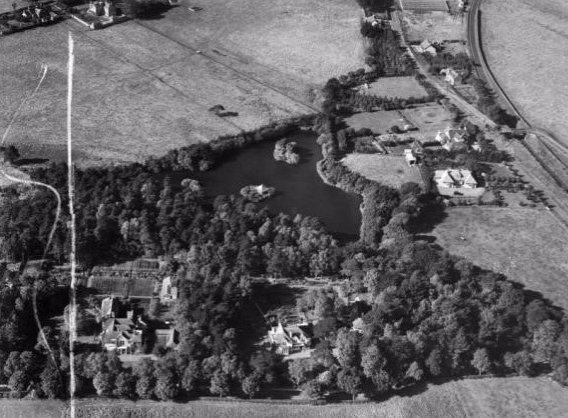 The course was located on all the ground in the top left hand corner of the pic.

"The last annual business meeting of this club was held on 14th april 1916. Now that the war is over it was thought advisable to ascertain the feeling of the public regarding the opening of the course for play again.

A public meeting was called for this purpose on Wednesday 23rd april. The secretary's report was very satisfactory, his books showing a substantial balance with which to make a start. It is noteworthy of mention that the club paid out of their funds on 23rd october 1915, to the Symington Ladies War Work party, the sum of ten pounds to help them in their good work. Mr Jackson Broomlands, who was present at the meeting, intimated that he was quite willing to give the course for an­other year if the club desired it. The chairman, on behalf of the club thanked Mr Jackson for his generosity, in giving the course free of charge for the last Fifteen years, and for again placing it at the disposal of the club.

The office bearers were then elected.

The secretary was instructed to take offers for the sorting of the roof and the painting of the clubhouse, also the making of a new stile. A truck of sand is to be ordered from carnwath, and the improving of the greens to be proceeded with at the earliest opportunity.: 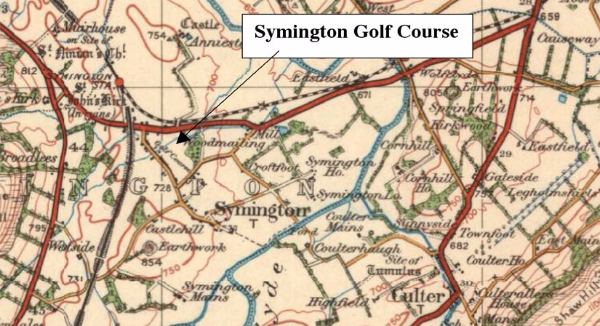 "The annual business meeting was held in the clubhouse on 2nd inst, when there was a fair turnout of members. Mr John McInnes, Vice president, occupied the chair.

The treasurer in his report showed a balance in favour of the club of sixteen pounds eight shillings and one penny, which was considered satisfactory.

"The annual mixed foursomes, ladies and gents putting and pitching competition were played on saturday 21st july, when a large turnout of members and friends were present to take part in the various competitions, the ladies who served out tea free of charge being kept very busy all afternoon."   (HA 28.7.1923)

Within AGM article : - "As there was no golf last year it was the feeling of the meeting that the course should be re-opened, providing that Mr W.K.Jackson, Broomlands, granted the use of the field."   (HA 30.4.1927)

1933 : Lionel Jackson (?) the well known sportsman and international curler, did the 9th hole on the Symington course in one stroke on Sat. The distance is 286 yards. (Eyewitness’ Scrap Book)

Story : Had US friend staying with him and went for game of golf at Symington. Warned him at 4th hole not to hook his ball as there was a bad tempered swan in that area. The American proceeded to hook his ball and Rev McCormick offered to replace the ball and he would retrieve the American's ball later when the swan was asleep. The American refused as he was not afraid of any swan and attempted to get his ball. Mr McCormick put the visitor on the train about two hours later minus his ball and his putter. Mr McCormick went back to the course at night - retrieved the ball and the putter, which he used for many years after!

Course closed around start of war. Reckoned that the course was ploughed up during the war and that about 10,000 Polish troops (2 divisions) were camped upon the course, circa 1940 after the Norway campaign.  Recalls using 1st & last holes for football pitch to play Biggar. (Eyewitness Rev Mc Cormack)

Clubhouse was taken down and used by fishermen as hut, opposite Toll Cottage on far side of the old railway line.  Nothing to be seen there now.

78 years later, a message from Canada

Yes, all these years later i find out what happened to the old Symington Pavilion. I had been told that it had been purchased by fishermen when the club finally went defunct during the 2nd world war, and had been re-sited somewhere in the area of the old golf course, however, it appears that it was in fact purchased by an individual and used as a summer or weekend retreat approx 1 mile away from its orginal location. A lady by the name of Ruth Thomson and her sister have emailed me from Canada as a result of seeing an old picture of the clubhouse ( Pavilion ) on this web site. It turns out that both of these ladies used to frequent the old clubhouse for summer breaks when they were both children and who also have many happy memories of the place and its location. They expressed in their email how emotional and surprised they were to see their old summer paradise which they called the Ranch. Their grandfather owned the property and had a horse called Sally. The two girls were brought up in Glasgow and it must have been quite an adventure to travel by bus from Glasgow to Symington in the late 50s and early 60s, and to take in the freedom of the countryside, no wonder they called it their little piece of paradise. Ruth and her sister have now kindly sent over some photo's of their happy childhood at the Ranch and have given forgottengreens permission to share them with our readers. 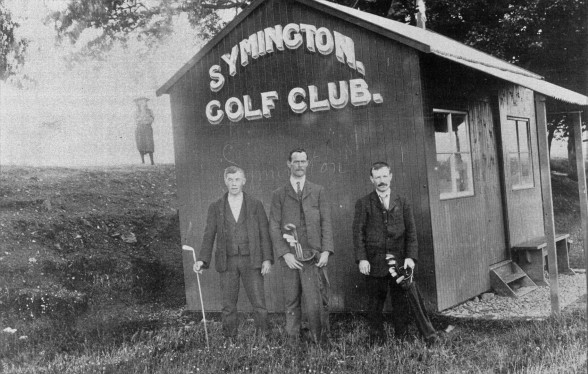 The old clubhouse at its orginal location on the golf course 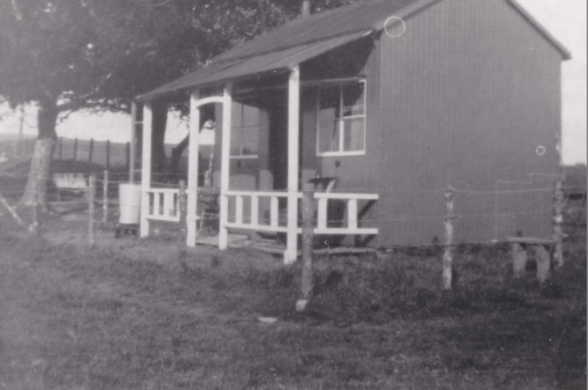 At its new location 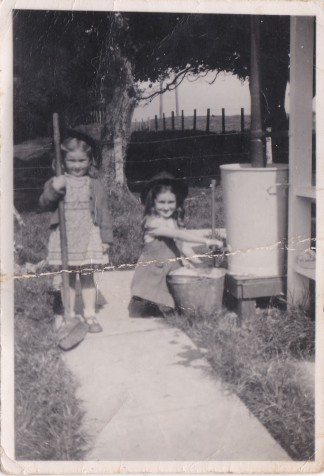 The girls during a clean up.