Advie Golf Club.  Instituted 1896.  The course of 9 holes is laid out on the Haugh of Dechroy, about one mile from the station.

“Yesterday afternoon, Mrs Sassoon, Tulchan Lodge, opened a new golf course laid out on a fine expanse of meadow on the farm of Dechroy, Advie.  A large number of visitors were present.

The new course is a nine-hole one, and abounds in hazards which golfers will appreciate.  To most of the holes a long drive will take the player well up to the green and an iron stroke will do so to the second hole.  The third will require careful play, a topped ball very likely falling among a dense patch of bushes.  The fifth hole is perhaps the finest on the course, and should be easily taken in three.  The eighth is the longest hole of the course, and requires a full drive and a full cleek shot, but the proximity of the river Spey requires the exercise of the utmost skill.  The last hole is practically just No1 reversed.

Mr Grant, farmer, Advie Mains, who has granted the use of the ground presented Mrs Sassoon with a handsome silver mounted club, with which she drove off the first ball from the second teeing ground, and formally declared the course open.  Mrs Sassoon was thanked for her kindness, on the motion of Rev. Mr Liddell, and a number of ladies and gentlemen afterwards had a game.”   (S 27.8.1896)

The very same article appeared in the Aberdeen Journal and the Glasgow Herald  on the same date. 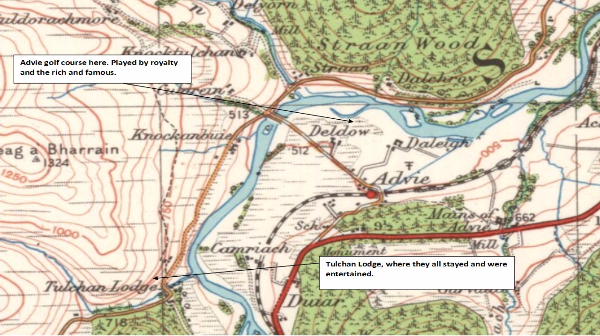 Royalty On The Golf Course

“The Duke Of York did not shoot at Castle Grant yesterday as was expected, the morning being wet. The weather having cleared up in the afternoon, his Royal Highness, along with a distinguished party from Tulchan Lodge, played over the new golf course at Advie, which was opened by Mrs Sassoon on Wednesday.”