Glasgow(1st Lanark RV) Golf Club. Instituted 1891.  "Towards the close of the drill season of the 1st L R V, in May last, several ardent members of the athletic club conceived the idea of making golf one of the features of the club.  The newly acquired drill ground of the regiment at Yorkhill might, it was thought, be utilised as a course, and the commanding officer of the regiment on being approached on the subject, at once acquiesced in the proposal.  After one or two preliminary meetings, a committee was appointed with full powers, and the result of their labours is seen in the small but well laid out course of six holes at Yorkhill.  The opening ceremony will be performed next Saturday afternoon by Colonel Reid, who will drive off the first ball.  Only members and honorary members of the regiment will be eligible for the club.  As the season is already so far advanced, the subscription until the 30th April next has been fixed at  the reasonable sum of 6s6d.  Colonel Reid has generously presented a monthly medal to the club, and Major Macfarlane, with equal generosity, has promised a handsome subscription for prizes.  The first competition for the medal will take place after the opening ceremony.  There can be no doubt that the formation of the golf club will add still more to the popularity of the favourite West End regiment, and may retain in its ranks at least some of those who had a thought of leaving them."(GET19.9.1891)

On Saturday a golf course in connection with the 1st L.R.V. Athletic Club was formally opened in presence of a large number of ladies and gentlemen interested in the undertaking.

The drill ground recently acquired by the regiment has been utilised for the course, and six holes have been laid down. The ground has to be kept intact for drilling purposes, consequently no hazards can be formed, but as putting greens have been nicely turfed and the holes well designed, the ground has been trampled on and hardened, insuring a not very varied game may still be enjoyed. Keeping in view that there is very little spare ground in this locality, the 1st L.R.V. May be congratulated on their effort to partly devote this field to golf. 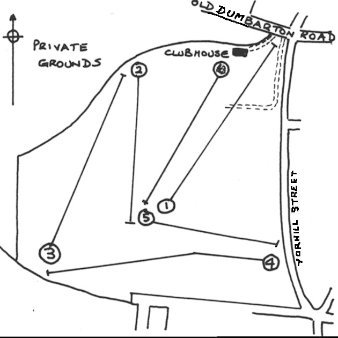 “Shortly after three o’clock on Saturday, Lieut. Arthur, on behalf of the members of the Athletic Club, in a few sentences asked Colonel Reid to perform the opening ceremony, at the same time presenting him with a driver with which to strike off the first ball. Colonel Reid, in acknowledging the gift, said that it gave him very great pleasure to be present on the occasion. He congratulated the members of the Athletic Club on the foundation of this section of the club, and he hoped it would not only be a means of bringing recruits to the regiment, but also of keeping them. He hoped the course would fulfil their expectations. He anticipated that it would do a great deal of good to the regiment. (Applause). He only asked that they would not devote too much time to golf, so as to neglect their drill.