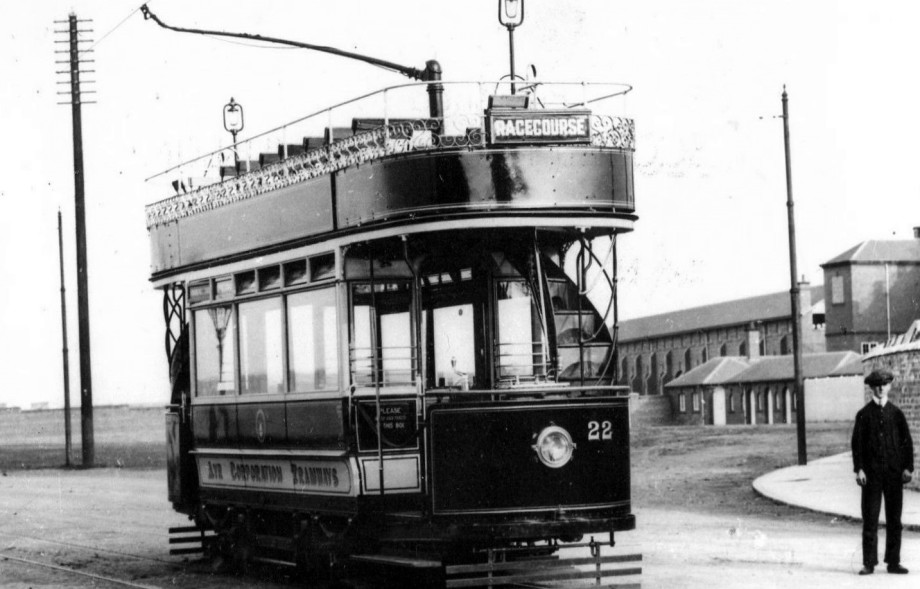 The corporation tram, used to commute from Ayr Town out to Newtonhead.

Operations are rapidly being pushed forward on the new golf course in connection with the Ayr Cricket Club, and throughout the past week the nine greens have been receiving very judicious treatment. It is expected the new links will be opened by the middle of April. 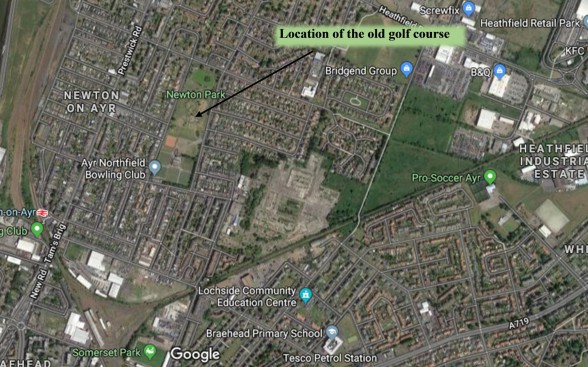 On Saturday afternoon, under the auspices of the Ayr Cricket Club, new links were formally opened at Northfield Park. The new links are situated to the East of Prestwick Road, and are convenient both to residenters of in Ayr and New Prestwick, a few minutes walk of Newtonhead Station. The course, which is one of nine holes, is a fairly sporting one, embracing hazards of all descriptions such as hedges, whins, burns, &c. The course itself measures about a mile and a quarter, while the distance to the longest hole is about 300 yards.

Since its institution the club has met with a great amount of support.

There being close on fifty members. The opening ceremony was performed by Mrs Naismith, who drove the first ball.

She was presented by Mr J.K. Hunter, Captain of the club, with a handsome driving cleek bearing an appropriate inscription.

The record for Ayr Golf Links was twice broken on Friday evening. J. Hunter and R. Scott, Prestwick, played an exhibition game, and the former went round in 68 and the latter in 72. The details of both scores were :-

The previous record was made by Fernie and stood at 73.

The new golf links at Northfield Park, Newton, Ayr, are proving most successful. The greens are turning out true, and about a hundred members have already joined the club

Ayr Club – The first annual meeting of this club was held in the Kings Arms Hotel on Friday night. The treasurer sumnitted his balance sheet from which it appeared that there was a small balance to the credit of the club.The office bearers for the ensuing season were appointed as follows :- Captain, Robert Ochiltree ; Vice Captain,James McCall ; treasurer, W. Robertson ; secretary,James McCorland. A committee was appointed to negotiate for the acquirement of an additional field, which would give an extension of about 60 yards to both the seventh and eighth holes. The links at Northfield are at present in very good order and it is the intention of the executive to do their utmost to keep them in the best possible condition throughout the season. 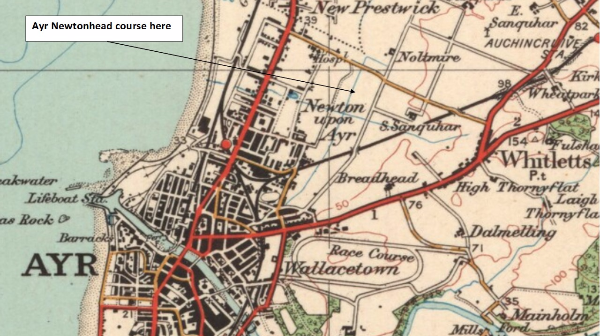 The Ayr golf club have taken their golf course at Northfield, within the burgh of Ayr, for another year. A large part of the course was recently purchased by the Ayr Town Council with a view to the formation of a public park for that quarter of the town, but as their purchase includes the pitch of the Ayr cricket club, whose lease has still a year-and-a-half to run, the corporation cannot begin operations till that expires, and for the present season, and possibly for the season of next year, the golf club will not be disturbed.

In the meantime the members are prospecting in the locality for another course, and it is possible and they will not have to go far afield to secure an equivalent to their present nine-hole course.