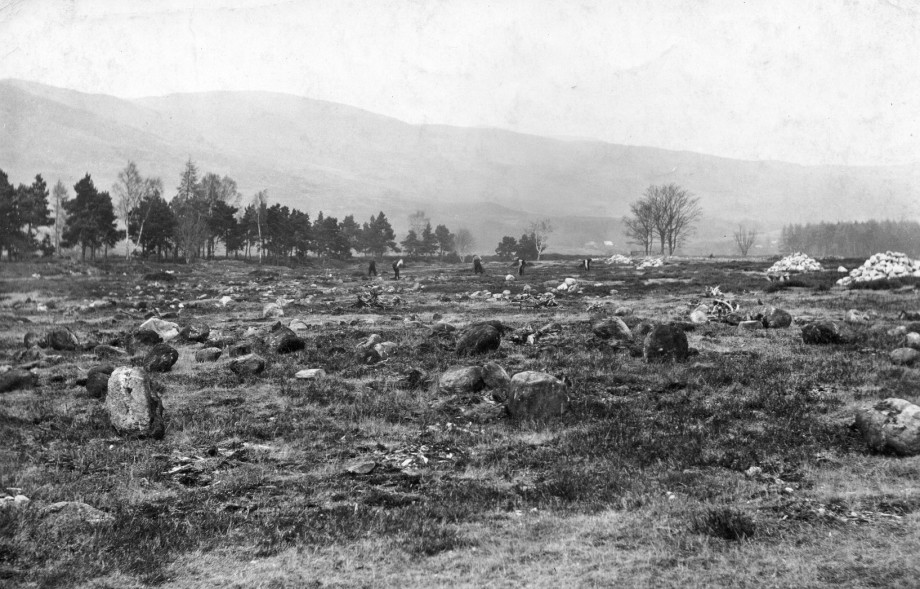 Ground Before. Just a couple of pebbles to get rid of lads before we can play.

"A movement has been set on foot with the view of securing a golf course for the village, and has, we understand, the warm approval of Lord Lovat, who will not readily lose his interest in outdoor sports. A piece of ground on a neighbouring farm has been fixed upon which would, in the opinion of experts, provide one of the best courses in the North, and negotiations, which it is hoped will terminate satisfactorily, are in progress for obtaining possession. To the Monastery community it would form a welcome addition to their recreations as an all year round pastime, and not a few of the villagers would be found to interest themselves in the game." (NC 24.5.1893)

"North of the Grampians the game would appear to be flourishing exceedingly. The latest addition to the greens in these parts is at Fort Augustus, which has now the advantage of possessing new railway and increased steamer facilities. Lord Lovat has granted the use of the ground – a beautifully situated stretch on the North bank of the river Oich, not far from the point where the river falls into Loch Ness.

Nine holes have been laid out in the meantime, and the round, which extends in length to about a mile and a half was formally opened last week. Mr Cameron, the tenant of the farm on which the course is situated, has generously given the ground free of rent for the first year." (S3.5.1898)

Note : It took them 5 years to eventually finish laying out their course, but there is no doubt that the above is the first Fort Augustus course / club.

"The plain on the North side of the river Oich, on the way to Auchteraw is admirably suited for the Royal and Ancient Game. When the question was mooted some years ago, an expert who viewed the ground gave it as his opinion that at an outlay of a few pounds an excellent course could be laid out. The course was accordingly prepared,putting ground and holes being made, but as it was then a private undertaking and known to few, it did not acquire the popularity that it deserved. But now that there is an energetic committee of the leading inhabitants of the village who have the matter in hand, it is assured of success.

The committee have been successful in raising sufficient funds to put matters on a firm financial basis. They have Lord Lovat’s permission for the use of the ground, and it is rumoured that his lordship, whose love of outdoor games is so well known in the Highlands, will in the near future come in person to ensure by his patronage the success of the undertaking. There are few, if any, golfing greens in Scotland that could vie with this course in the beauty of it’s surrounding scenery.

Many years have passed since the notorious Duke Of Cumberland, as he stood on Glendoe Hill and beheld for the first time the beauty of the scene, saw it as a

“Jewel in the midst of hell !” Strolling over the face of the projected course a further thought presents itself to the mind. Dotted here and there over the plain are the remains of houses. Like every other glen in the Highlands, this also sent its shiploads of emigrants to foreign shores. Only sixty years ago some 200 families left this strath to freer happier homes across the seas. Men are becoming precious in the Highlands – it is impossible to call back the race that has left it.

But, much can be done, and every use should be made of each favourable opportunity that remains, of every chance that may arise. Our village must in time develop. The golf course will help, and on its borders, where clansmen had once their homes, there are presented nowcharming sites for compact well built villas and cottages." (OT 28.11.1903) 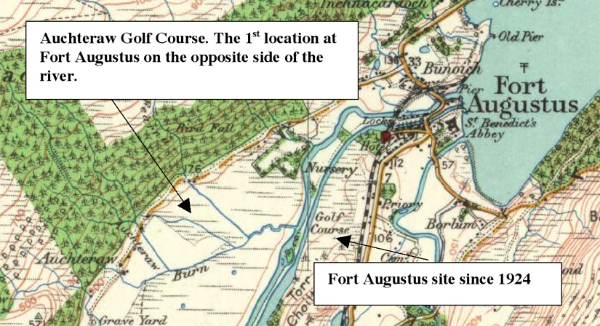 "A strong and large cobble has been purchased by the golf club committee. It will be placed on the river Oich, on the long pool below the “ Ceathramh mor” and near to the first hole of the golf course. The cobble will be pulled from side to side by an endless chain and system of pulleys. By means of this ferry, the distance to the golf course from Fort Augustus and it’s various Hotels will be much shortened, and visitors will not be obliged to trudge round by Bunoich, “ Baile frisel,” and Tornabrach." (OT 21.5.1904)

"On Tuesday the Fort Augustus Golf Course, which ws laid out by Chief Constable Alex McHardy, was formally opened. The day was all that could be desired – bright sunshine and a light mild breeze from the South – West.   On the site of the future pavilion there was erected a marquee, gaily decorated with flags. In front of this tent the opening ceremony took place. By eleven o’clock, the hour fixed, a large number of Ladies and Gentlemen had gathered from Fort Augustus and the neighbourhood, as well as many strangers and well wishers from other parts.

Dr Johnston, in calling upon Lord Lovat to declare the course open, presented his lordship with a handsome silver-mounted driver bearing the inscription :- “ Presented by the Fort Augustus Golf Club to the Right Hon. Lord Lovat, C.B., C.V.O., D.S.O., On The Occasion of His Opening Of The Golf Course, July 5th 1904.”

The doctor dwelt upon the great help given to the club by Lord Lovat, in fact it was not too much to say that had it not been for his patronage and handsome subsciption the golf course at Fort Augustus would not have been in existence. Dr Johnston shortly traced the history of the various efforts made at different times to secure a suitable course near Fort Augustus, and all were now glad to see all difficulties overcome and the course an accomplished fact.

Lord Lovat thanked the club for their presentation, and declared that it gave him great pleasure to come to Fort Augustus to assist at the opening of the new golf course. Fort Augustus had always been noted for its love of sports of all kinds – Cricket, Football and Shinty – and he was glad to see golf added to the attractions of the village. The game would be a source of pleasure to the inhabitants, and would attract to Fort Augustus, and would induce to stay for a time the tourist and seeker after health, both of whom would reap pleasure and benefit from a game on this excellently situated course. The club would excuse him if he did not strike off with the driver just presented to him. He wished to preserve it as a momento of the occasion, and being but a poor golfer he might unwittingly imitate one of his majesty’s ministers whom he saw opening a course recently. There was a vigorous swing and blow, turf flew, the ball remained where it was, and the driver was a wreck. ( Laughter and Applause).

Lord Lovat then successfully struck off the first ball from the teeing ground, and a game between players representing Inverness and Fort Augustus straightway commenced. Lord Lovat led off with the Fort Augustus team, and after an enjoyable game lasting about two hours, Inverness was declared the winner with 10 holes to 7.

At the conclusion of the match cake and wine were served out to the ladies and gentlemen present and a series of patriotic and other toasts followed. “ The King and Queen and other members of the Royal Family” was proposed by Dr Johnston; “ The Imperial Forces” by Captain Fraser, to which Lord Lovat replied. The next toast was “ The Guest Of The Club, Lord Lovat.” Dr Johnston, in a few well chosen and enthusiastic terms, proposed the health of Lord Lovat, which was drunk with heartiness, amid rounds of repeated cheering.

In the South Of Scotland he has seen the rapid development And growth of quite small villages consequent on the institution of a golf course, and he was certain that did this club get matters on a sound financial basis the advantages of the course to the village of Fort Augustus would soon be apparent.

After one or two other speeches the days proceedings were brought to a fitting conclusion by a luncheon provided for members of the club and their guests at the Lovat Arms and Station Hotel.

The new course is a nine hole one, with a sufficiency of hazards. It is too much to expect that a green should be perfect on an opening day, but all that the course requires is plenty of use and due attention to the rolling and levelling of the putting greens.

For the rest, there are few if any golfing greens in Scotland that could vie with this course in the beauty of the surrounding scenery." (OT 9.7.1904)

"A friendly match was played over the Fort Augustus golf course on Saturday by teams representing Fort Augustus and Corpach. The visitors arrived by the 10.30am train, and were received by some of the local players. Together, they made their way across the canal and the river Oich to the new course, and play commenced.

The day was all that could be desired. The course is improved and the match was keenly contested. After the game the Corpach players were entertained to luncheon in the Douglas Hotel. They left by the afternoon train. 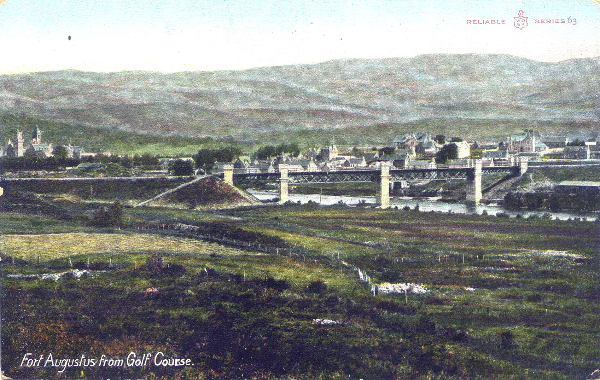 "On the evening of Friday a concert was, under the auspices of the Golf Club committee, given in the public schoolhouse to a large and appreciative audience. The Chairman intimated that the concert was organised with the two-fold object of materially adding to the Golf Club funds, and  affording select entertainment to the patrons of that institution which had recently been added to the many other attractions of the Fort Augustus district. The benefits accruing from a first-class golf course extend directly or indirectly to all in the community; and from the well-sustained encouragement given by peer and peasant to the management committee this fact is being fully realise. The entrance fee not being prohibitively high, the committee have to resort to the pleasure-giving method in order to supplement the funds. The singing of the National Anthem brought a socially and financially successful function to a close.” (NC 5.10.1904)

"A very sporting little course, abounding with natural hazards, chiefly a burn and a wall.  Holes may be rather short but abundant scope for good lofting and pitching.  Putting greens almost perfect and surrounding scenery charming.

After the First World War the land was required by the Forestry Commission for planting.