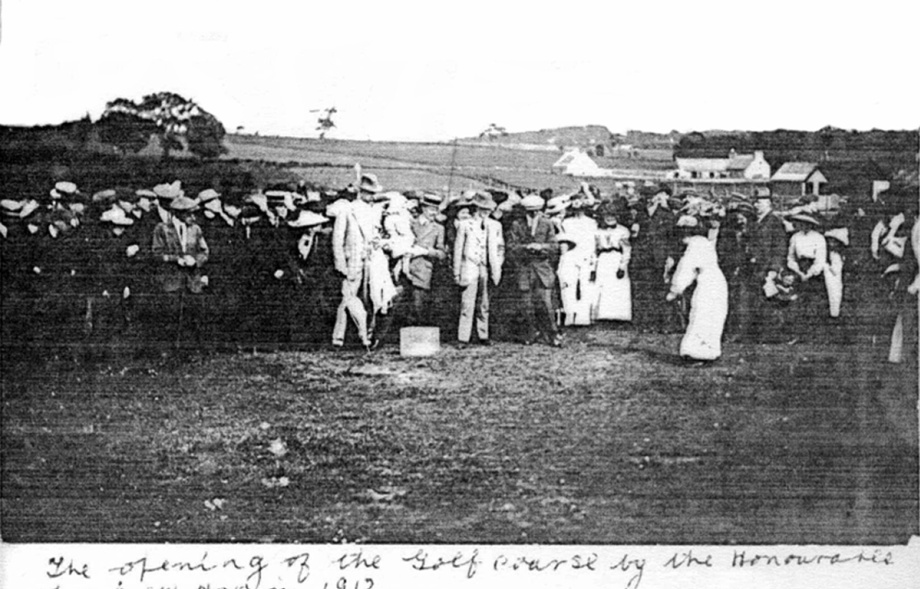 The game of golf in Insch was first recorded before World War I, with the course being laid around Dunnideer Hill. It was then moved to its present location around 1923 where it existed until 1940, when the ground was seconded by the War Department for use as a grenade range. “ (I)

First Course.  “The new golf course at Insch was formally opened yesterday in presence of a good attendance of ladies and gentlemen. The course – one of nine holes – is situated about three-quarters of a mile to the north-east of the village. It is laid out to the best advantage on two pasture fields at the foot of Dunnydeer Hill, the property of Mr George Cooper, who is honorary president of the club. The first teeing ground is at the top of what is known as the Belts. The longest and best hole is close to the railway, and the driving is in the direction of the mill of Dunnydeer. For an inland course, golfers – especially the less experienced – will find that it provides ample sporting qualities. The greens are at present in a somewhat primitive state, but if they are well looked after for some time they will soon improve. The officials of the club may be relied upon to do everything in the way of improving the course. The membership of the club numbers about fifty – a most encouraging start – and there are indications that that number will be considerably increased. The president of the club is Provost Dawson, and the vice-president Dr Davidson, Mr W A Macdonald is captain, and Mr A A Middleton should prove an excellent secretary.

Provost Dawson was thankful that at last they had been able to formally open the new course as the original date had to be foregone because of bad weather. The club had been fortunate in getting a good and interesting course.The old castle of Dunnydeer stood on the hill behind, and overlooked the grounds; a very fine view of Insch and the surrounding district was obtainable. He hoped the course would be well patronised and tat it would be the means of bringing visitors to Insch. Mr Cooper, who had kindly placed the the grounds at the disposal of the club, was to have opened the course on the original date, but was now unable to attend as he was away on business. In his place was Mr Smith, of Pittodrie, who identified himself with all good institutions in the district. Mr Smith had kindly agreed to become a patron of the club, and had subscribed handsomely to the funds. Mr Smith then declared the course open and called on Mrs Cooper to drive the first ball. Mr Ironside presented her with a Driver as a souvenir of the occasion. Dr Davidson called for a vote of thanks to the ladies who had thoughtfully provided tea and cake, which were much appreciated. 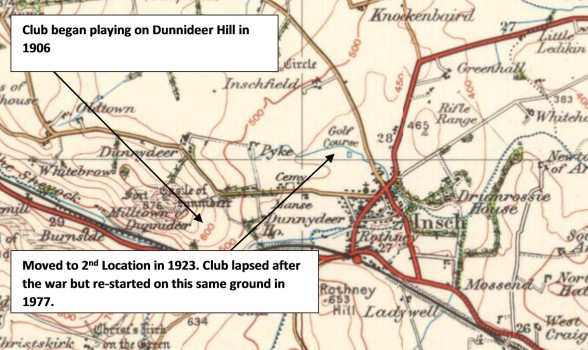 At a meeting of Insch feuars in the public hall, consideration was given to the gift by Mr Leith Hay of the common to the town for a pleasure park and recreation grounds.The question of the lease granted by Mr Leith Hay for the remainder of the ground, which the feuars have taken on a fourteen years lease to augment the common, so as to lay out a golf course, cricket, and football field, was also considered. The ground extends to close on 29 acres. The whole matter has now been arranged and the work is going on. The committee expect to be in a position to lay out the course very soon. 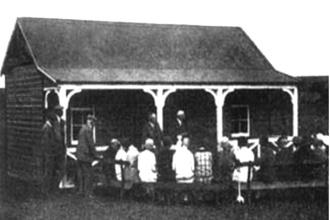 Second Course. Opened in 1912. A 9-hole course, half mile from the station.

The new golf course and recreation grounds at Insch, Aberdeenshire, were formally opened yesterday afternoon by the Hon. Mrs Leith Hay of Leith Hall who was accompanied by Mr Leith Hay. There was a large attendance.  The ground measures twenty-nine acres, 12 of which are old commontry gifted to the feuars by the superior, Mr C.E.N. Leith Hay with 16 acres added from the adjacent arable land in order to complete the golf course.  This latter portion is leased for a period of fourteen years from Mr Leith Hay by the committee of feuars at an annual rental of £24.  For the fencing and improvement of the grounds public subscriptions amount to £250 including a donation of £50 from Mr Leith Hay, and a similar sum from Colonel J.F.Beattie, Emerald Bank.  The grounds, which have been well fenced and nicely laid off abound with natural hazards and make a splendid nine-hole sporting course. 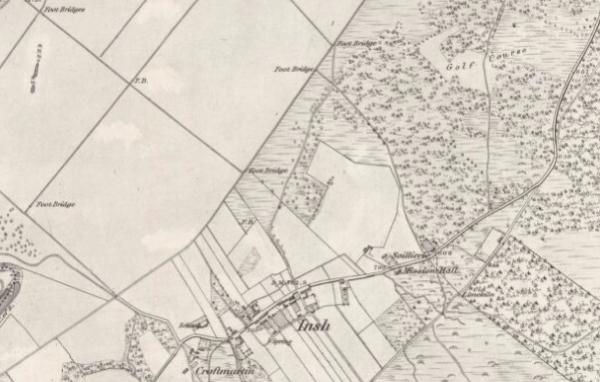 The handsome new pavilion erected by Insch Golf Club, a little above the entrance to the golf course, was formally opened yesterday afternoon in lovely weather.

The chairman, in opening the proceedings, congratulated the ladies in turning out in such large numbers for occasion. Some years ago they had agreed that they would have a building erected that would be a credit, not only to the club, but to the community. Plans had been prepared by Mr John Soutar, Maryfield, who had carried out the work in an excellent manner. ( Applause )

The total cost was in the neighbourhood of £110, and this had been all raised except about £21. Mr Findlay, Bank Agent, ( Vice President of the club ) said he had been very successful in getting the money from the community, including a generous subscription from Provost Beattie. He took that opportunity of thanking the Provost and all other donors for their generosity. ( Applause ) They also thanked Mr Soutar for doing his work so well. ( Applause )

He then called upon Provost Beattie to open the pavilion.

Provost Beattie expressed the pleasure it gave him to be present, and thanked them for asking him to open the pavilion, which would improve the amenities of Insch. ( Applause )

He hoped the club, which had been prosperous in the past, would have increased success, that the pavilion would add to their prosperity, and that the membership would be greatly augmented.

On the motion of Ballie J.A.Saunders, a similar compliment was accorded to Major Macdonald for presiding. An enjoyable tea was provided at tables presided over by Mrs Macdonald, St Andrews House. A mixed foursome handicapped competition was played in the evening.

The official opening of Insch golf course took place in presence of a large company of members, who were welcomed by Mr W. Ferries, Captain. Mixed foursomes were played, the winning couples being :- Miss I.M. Alcock and John Durno, and Miss L. Stephen and Wm. Findlay.