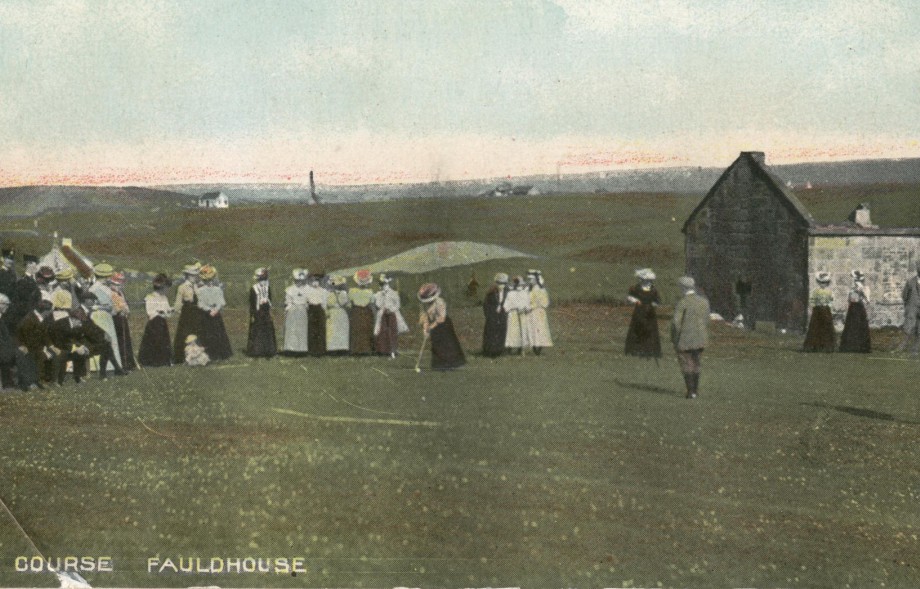 A few enthusiasts met in St Johns Hall on Tuesday night, and formed a golf club for this district. Mr A. Chalmers, wine and spirit merchant, presided. A number of gentlemen gave in their names to become members, and it was agreed to ask Mr Peter Thornton, Coalmaster, to become President of the club. The following office bearers were elected :- Vice President, Mr H.A. Forsyth ; Secretary, Mr R. Giffen, Treasurer, Mr Alex Chalmers ; Committee – Messrs D Maxwell, R. Johnston, R. Grant and W. Thomson. The course is situated in the centre of the village. One of the outstanding features of the course is that little difficulty has been experienced as to bunkers and hazards. Belts and patches of rushes and ditches have been utilised as hazards, and most effectual one they make. The course is a seven hole one, and extends to about a mile. It is very conveniently situated as regards trains. Fauldhouse Station and the Caledonian Railway and Crofthead Station on the North British Railway being within about four minutes walk from the first tee. The course will be opened about the 8th September.

The newly formed golf club at Fauldhouse opened their course last Friday afternoon in favourable weather. A large crowd of people witnessed the opening ceremony. A number of Lady friends were also present. The members previous to the opening decided to present Mr Thornton with a club with which to open the course. Mr Forsyth in making the presentation said he had much pleasure in handing over the “ Driver” to Mr Thornton, and hoped he might long be spared to use it in the noted game. The inscription of the club is – “ Presented to Peter Thornton, Esq, on the Opening of the Fauldhouse Golf Course – 14th September 1894.” Mr Thornton in accepting the present said he had much pleasure in coming forward that day to open the golf course. Crofthead had need of some means of amusement, and he thought golf was one that could be well kept up in the place. It was only a year now since he started to play it, and though long in starting he had enjoyed the game very much. ( Applause ).

Mr Thornton then drove the first ball, and declared the course open. The Secretary and Treasurer then picked sides and played a foursome, and after going once round the course the Secretary was found to be five holes in advance of the Treasurer.

The club presented to Mr Thornton is a handsome “ Driver” with a rosewood handle and a purple heart head. A cake and wine banquet was given in Greenhills School at five o’clock at which there were present Miss Merrie, Miss Henderson, Miss W. Rae, Mr D. Maxwell, Mrs Knight, Miss Brownlie, Mrs W. Steele, Mrs Mitchell, Miss Thomson, Mrs H.A. Forsyth, and the Misses Giffen, also Mr W. Rae, Edinburgh ; Mr O Douglas, St Andrews ; Mr A. Reid, Longridge, Mr J. Meikle, Stonehead ; and Mr Henderson, Manager, Leavenseat ; besides a large number of members. The President proposed the toast of “ The Club” ; Mr Mitchell” The President” ; Mr Giffen “ The Ladies” and Mr Fraser Replied ; Mr Chalmers proposed “ The Visitors” and Mr A. Reid replied. Mr John Muir sung “ Mush Mush “ to the great delight of the company. The toast list being disposed of, the members went out to the course once more, and had an evening’s enjoyment. 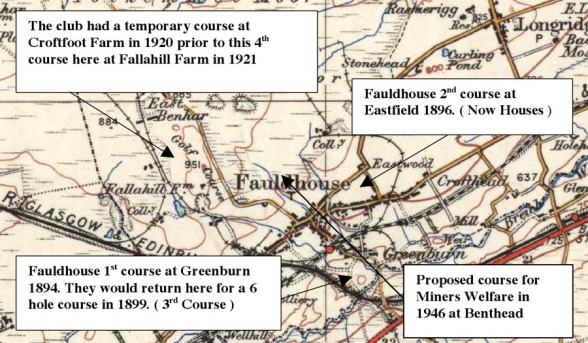 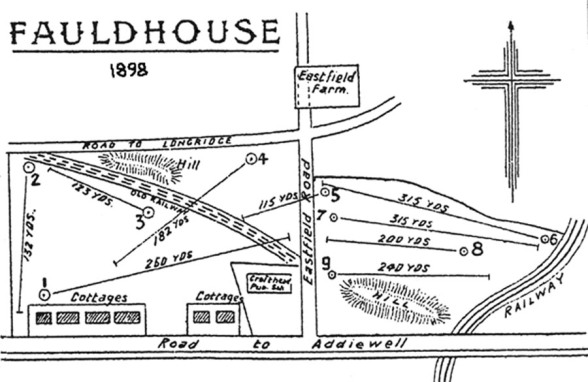 This club opened their new course on Friday and Saturday, 2nd and 3rd June – On Friday, a competition by foursomes took place between teams selected by Dr Thornton and Mr P. Giffen, ending in a win for Dr Thornton’s team by 1 hole. On Saturday, stroke competitions were played. In the senior competitons the winners were – 1, John Muir 2, Thos. Edmonstone 3, Dr Gardner. The first and second tied and on playing off resulted as above. In the novice competition the winners were – 1, J. Williamson Jnr 2, John Campbell 3, Harry Wilson, the second and third tying in the first round. The new course consists of six holes and abounds in many natural hazards. The distances between the holes are as follows :- 1st 267 Yards 2nd 227 yards 3rd 181 yards 4th 221 yards 5th 272 yards 6th 303 yards. 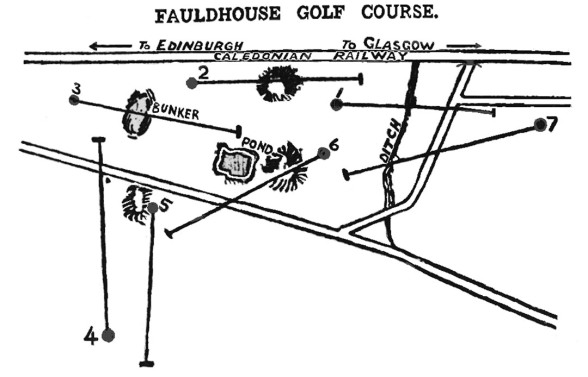 The new golf course at Falla Hill was opened last Wednesday evening in presence of a number of members and friends. Dr Ogilvy, M.D. who opened the course, said it was quite a good thing that the old course had been ploughed up.They had secured a very fine course, which after a year or two’s play would be the best for a long way round. He wished the club every success, and had much pleasure in declaring the course open for play. The time honoured game, Captain  v  Vice Captain was played off, and ended all square. On Saturday the Armadale team visited the course and gained a victory over the local by four games to one and three draws. The visitors had some very flattering remarks to make on the new course, and predicted a brilliant future for it.

Greenburn Golf Club, Fauldhouse on Saturday opened their new 18 hole course, which has been constructed mostly by voluntary labour. The ceremony was performed by Mr Robert Coutts, a local chemist who is one of several villagers who have gifted trophies for annual competition. Mr Coutts then drove the first ball off the tee to declare the course open.