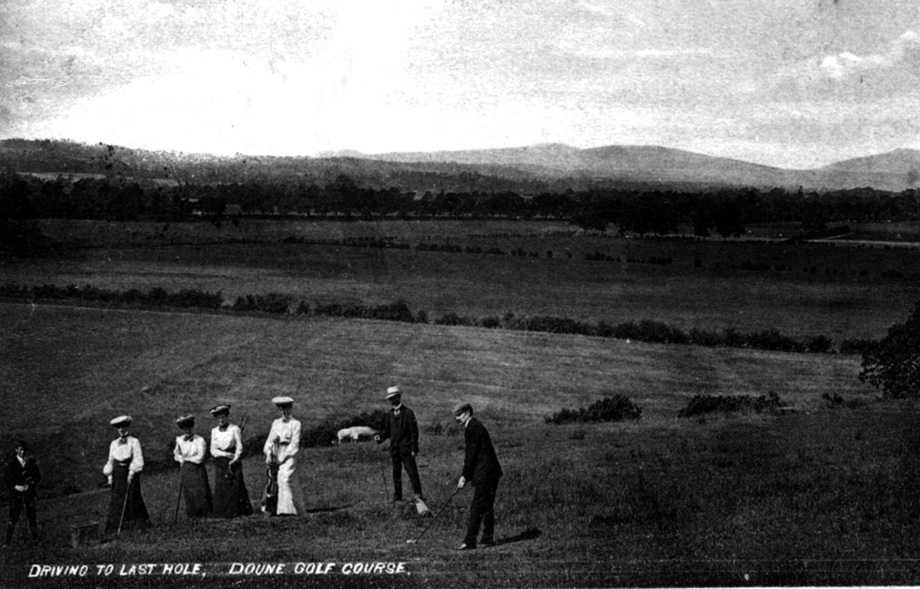 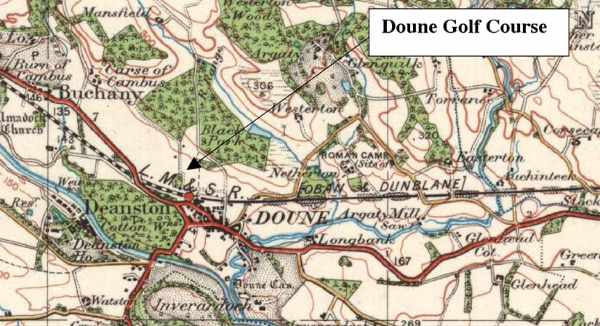 Formation of Golf Club at Doune.

A course of six holes will be laid out to the north of the station, immediately beyond the crofts."   (Scotsman 4.11.1903)

"A movement has long been on foot to form a golf club in the district, and among other willing workers towards this end may be mentioned Mr John Dinwoodie of the Union Bank, who deserves the highest credit for his unsparing efforts in helping to create a club, which, when the mysteries of the game are satisfactorily acquired, must prove an inestinable boon, both from healthful and recreative points of view to all the members who devote themselves to the enjoyment of the sport. The outcome of Mr Dinwoodie’s and his friends enthusiasm was a very largely attended meeting, which was held on Friday evening.

The Rev. G.S. Mackay presided and it was unanimously agreed to form the club. It was intimated that a course, unfortunately not of very great extent, comprising only six holes, had been secured in the park lying between the target wood and the crofts. The park is at present rented by Mr Peter Morrison who has agreed to sub let it to the club on very reasonable terms. The members of the club are restricted from entering the wood in search of balls, which may be hit there by robust players at any time, and are requested to confine themselves strictly to the park – a restriction which must necessitate the providing of a liberal supply of spare balls.

"The course has not yet been formally opened, but the committee are pushing things on as rapidly as possible, and a beginning is promised at an early date. Mr J.W. McAnish has been appointed as keeper of the course."

"On Saturday afternoon the Golf Course recently formed by the Doune Golf Club on the Wester Hill above the town, was opened for play by the Countess of Moray,who drove the first ball. The hill extends to about thirteen acres, and threre are six holes on the course, which ought to prove of great advantage in enhancing the welfare of the district.

Rev. Mr Peat said that he had been deputed as Captain of the golf club to call upon Lady Moray to open the course, and strike the first ball.He was quite sure that they regretted the absence, through indisposition of Lord Moray, but at the same time they were fortunate in having a most worthy substitute.

In calling upon Lady Moray to perform that function he might allude to the very great privilege which had been conferred upon them by his Lordship in granting them permission to play golf on that beautiful hillside, where they expected to have much healthy recreation, as well as much healthy rivalry and friendly intercourse.

They might not on all occasions be able to admire their own, or one another’s play : but there was one thing they should not be able to find fault with, and that was the lovely scenery. (Applause). They were all aware of the kindly interest that her Ladyship and Lord Moray had taken in the burgh, and they as golfers may be permitted to think that the favour conferred upon them was not the least they had done to the community.

They were very grateful to Lord Moray for his extreme coutesy during the negotiations in regard to the formation of the course, and they trusted that he would never regret the support and the patronage which he had given to them as a golf club.

He concluded by presenting, in name of the club, a silver mounted golf club to Lady Moray, to strike the first ball, remarking that they as golfers would rejoice if they found Lord Moray on many occasions putting the club to it’s legitimate use.

Lady Moray said that Lord Moray regretted very much that he was not able to be present that day, being confined to the house with a cold. He desired her to say that he hoped the course would be a source of pleasure to those who used it.

She thanked the members for the handsome club, hoped that Lord Moray would soon be able to come and play himself, and declared the course open. (Applause) Her Ladyship afterwards drove the first ball amid a hearty round of cheers.

Colonel Campbell, President of the club said that he knew they would all join with him in according to Lady Moray a hearty vote of thanks for having opened the course. H

Her Ladyship had driven a most excellent ball, and they hoped that she and Lord Moray would come occasionally and play on the ground which had been placed at the disposal of the golf club. (Applause).

Provost MacKay said that personally he had been looking at the matter from the point of view of the good which would be derived by the district from the golf course.

In these days of fiscal controversy it occurred to him that the export trade of the shopkeepers of Doune would go up enormously in consequence of the opening of the golf course. (Applause)

The company were afterwards photographed by Mr Russell, Doune. During the afternoon several of the members played over the course."

"Bogey Competition. – Mr P.C. Merrie, with a stroke at three holes finished all square with “Bogey”, with the fine score of 75, less 3-72. Mrs Macnee,with an allowance of 6 also equalised the Bogey score for ladies with 95 less 6-89.

"In order to assist them in defraying the expenses of an extension just made to their course, and, if possible, to raise funds to erect a pavilion on the face of the hill in such a position as to command a full view of the course, the Doune Golf Club held a Bazaar in the drill hall on Friday and Saturday.

The total receipts for Friday and Saturday exclusive of the drawings in a subscription sale for several of Mr MacNee’s pictures, valued at £50, amounted to £210.

The management have reason to congratulate themselves on having scored such a big financial success. They will now be able to erect a handsome pavilion, and defray all the expenses of the extension of the course." 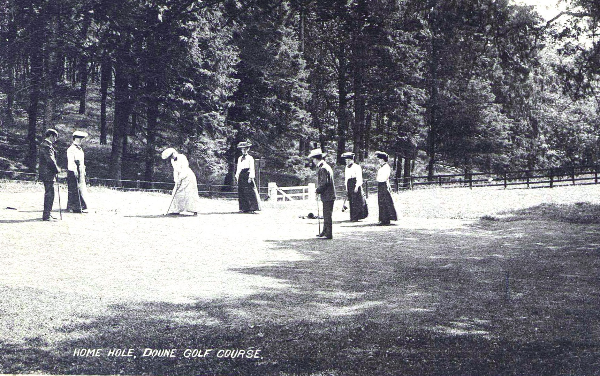 "The annual general meeting of the members of the Doune Golf Club was held on Monday evening, being the second anniversary of the club’s formation.  The Rev. J.C.Peat, captain, presided, and there was a good attendance.

The treasurer, Mr John Main, submitted the financial statement, which showed a balance in hand of over £208.  It was decided that a small pavilion should be built, and the following were appointed a Committee to deliberate on the style, cost, etc; and report to General Committee: the Rev. G.S. Mackay, Mr R. Macnee, Mr P.C.Menrie, Mr Main and Mr Gray.

Other great improvements and alterations on the course were commented upon, improvements which it is hoped will make it compare favourably with other inland courses, so that Doune might attract all families with golfing propensities.  As another means of spreading the popularity of the links, it was agreed to issue family tickets at 25s, which would throw open the privileges of the club to all the members of a family.

The secretary, Mr P.C. Merrie, gave the following interesting report of the progress of the club; -  “As reported in March,1906, the year 1904, which was the first of the club’s existence proved very satisfactory, and so far as this year has gone, the club has been steadily improving in many ways.  With regard to the course everyone will admit that the Green Committee have done their best for the players, and the present six-hole arrangement with the greens in excellent order, makes a pleasant little course.  Then we are all eagerly looking forward to the opening of the extension, which is gradually taking on the appearance of a golf course.  Then we are eagerly looking forward to the opening of the extension, which is gradually taking on the appearance of a golf course.  This time last year we had a membership of 82, and to-day we have 75.  At first glance this looks as if the club were going back numerically; but if we remember that a considerable number who joined the first year were not expected to continue their membership, and also notice the amount of new talent introduced this, year, we have every reason to congratulate ourselves on the progress we made.  As regards visitors, during the first fourteen months of the club’s existence, we sold 10 fortnightly tickets, 12 week tickets, and 37 day tickets, and during the last ten months we had 6 visitors for one month, 10 for a fortnight, 7 for a week, and 17 for one day.  The winners of the monthly medal competitions have been as follows:-  Gentlemen winners – Mr W. McAnish, Mr W. Smart (3 times), Mr John McAnish, Rev. G.S. Mackay, Mr W. McLachlan, Mr Jack Carswell, and Mr Ian Mackay (the present holder),  The captain, the Rev. J.C. Peat, for the second time,although he has never secured the medal, holds the record for medal play, having reduced his last year’s 76 to 73. Ladies:- Winners – Mrs Macnee (3 times in succession).  Miss Ashton, Miss M.W. McLachlan, and Miss J. McQueen (tie) and Miss McLean (present holder).  Miss McLean also made the lowest scratch score for ladies in medal play with 95 (last year’s being116).  She holds the ladies’ record for the single round of 6 holes with 4,3,6,4,4,6 – 27.   Here it might be noticed that the captain’s record of 20 for the six holes remains unbeaten; but the vice-president the Rev. G. S.Mackay, succeeded in beating the 69 made by Mr Peat for the

18 holes by 1 stoke with a perfect score of 68.  With regard to match play, the members have also reason to congratulate themselves.  Although the Stroyan trophy has not yet come to Doune, the competitors this year showed considerable improvement over last year’s play, while in the inter-club matches with Callander, the tables, so to speak, have been completely turned, the double match resulting in a victory for Doune by eleven games.  The winners in the various club competitions were :- Bogey Competition- Mr P.C. Merrie 75 (3-)72 even with (bogey), and Mrs Macnee 95(6-89 even with bogey)  Mixed Doubles – Miss Mary McQueen and Mr P.C. Merrie. Mr J. McLachlan’s prizes.

A 9-hole course on Stewart's Hill between the Currachmore and the Black Park, and on the field below this hill, 5 minutes from the station. The pavilion was on the low ground, beside the Crofts. 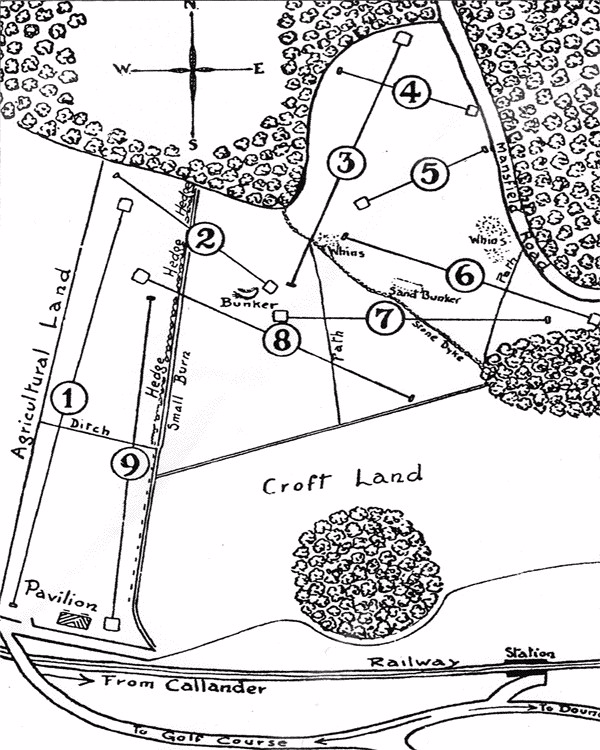 "The course as extended to 9 holes has proved a great success. Although none of the holes are long, still the player gets all kinds of strokes to play, some requiring a lot of 'head work.'  Perhaps the most characteristic hole is the 7th, where the green lies immediately beyond a stone dyke, and should be reached from the tee with a good cleek stroke. There are many other places where 'nice' strokes are necessary so on account of the ground is partly flat and partly hilly, the player requires all his clubs.  The high part is surrounded by woods.

A new pavilion was erected this year and is well placed on the low ground at a point from which almost the whole of the course can be viewed.  Hazards include a dyke, which is crossed 3 times, made bunkers, whins, woods and boundary roads.  P C Merrie Hon Sec."    (Nisbets Golf Year Book 1907)

In 1924 more ground, to the west, was taken in and a new pavilion built near the road bridge over the railway with access from the Callander road.

In the war of 1939-45 the whole of the low ground succumbed to the plough and now the eastern end has been torn up by sand and gravel workings and the pavilion has been sold as a dwelling-house. Membership peaked at 120 in  1938.