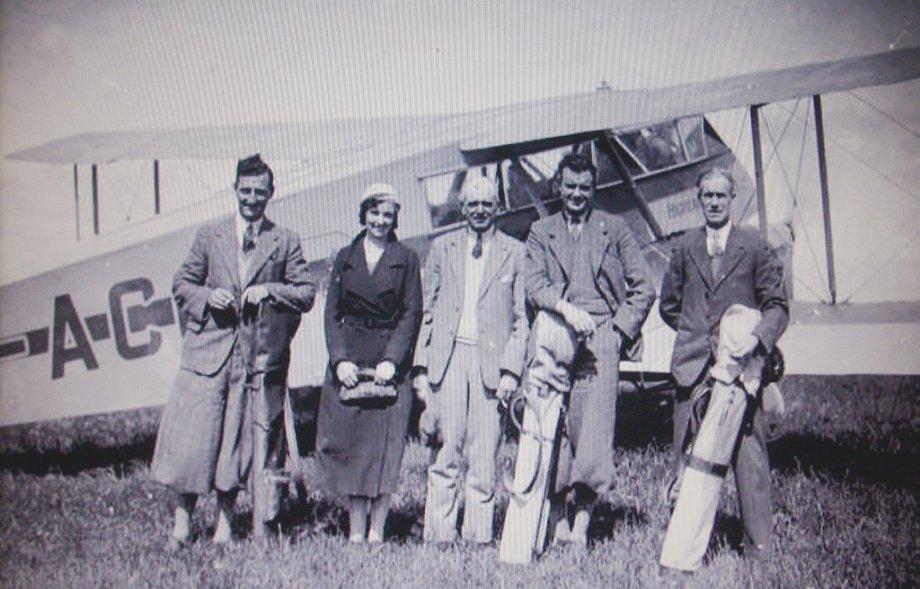 Now this is the proper way to get to the golf.

The two golf courses used to be in the fields behind the hotel.

A party of golfers to the number of fifteen drove down from John O’ Groats where they had enjoyed a fair day’s sport. After going round the course three times, the party sat down to an excellent dinner in the Royal Hotel. Mr A.W. Henderson occupied the chair,while Mr W. Paterson Smith acted as croupier. Late in the evening the golfers returned to town highly satisfied with their annual holiday.

A 9 hole course owned by, and adjacent to the Hotel.  George T MacKenzie, a teacher in John O' Groats, was responsible for laying  out the course.  In 1898 the hotel was sold and the course fell into disuse. It was resuscitated by Mr Mackenzie in 1901.  50 golfers from around the county gathered for the  re-opening in September 1902 by Master Mervyn Sinclair, son of the Freswick Laird, Captain Sinclair.  The course ran almost from the front door of the hotel and stretched for 2815 yards along the links, with a par of 40.(Source: "Lest we Forget - The Parish of Canisbay")

First mentioned 1891. “It has been the custom of the Wick golfers for a number of years to spend the annual holiday at John o’Groats. There are at John o’Groats splendid golf links that compare favourably with those of Musselburgh or even St Andrews. There are plenty of hazards, while the putting greens are smooth and even, and last, but not least of the attractions, there is the John ‘Groats Hotel. The course is rather shorter than the ordinary one, and so admitted three full rounds being played before the dinner-adjournment..” (JOGJ 9.6.1891)

A special meeting of the members of this club was held in the evening of Wednesday last in Nicol’s Station Hotel. A.W. Henderson, esq. Of Bilbster, presiding.

The Secretary ( Captain J.H. Henderson, Rosebank ) intimated the terms upon which Mr Sinclair, the tenant of Reiss Links, was willing to allow the members of the club to play any day of the week the whole year through, instead of once a month as at present, which terms were cordially approved of and agreed to. Other business having been disposed of, the President ( A.W. Henderson Esq ) presented the club with a very handsome trophy in the form of a large silver mounted horn on a silver pedestal and bearing the insciption ; “ John O’ Groat Golf Club.- Presented by A.W. Henderson, Captain, 1892.” The President, having made the presentation, Mr Nicholson, Teacher, replied on behalf of the members, and thanked Mr Henderson for his handsome gift to the club. The trophy has to be won three times in succession to become the property of the winner.

John O’ Groats has added a new interest to its visitors in the institution of a golf course. The hotel, for many years under private management, has now been placed under estate control, and Captain Sinclair’s factor is taking energetic measures to utilise the splendid links adjoining the establishment. Under the direction of he local hon, secretary of the John O’ Groats Golf club, rapid progress was made in repairing the greens, and in the removal of superfluous obstacles to a proper enjoyment of the game; and after a few month’s work very little is left, so as to satisfy the requirements of the most ardent golfer. The course is one of nine holes which, however, can very easily be extended to eighteen should it be desirable. It begins almost at the hotel door, and the round embraces the distance of 2815 yards from start to finish. The names and lengths of the holes, with their par play are: 1st Hole “Waster Jubigil” 205 yards, 4 strokes; 2nd Hole “Jubigil” 240 yards, 4 strokes; 3rd Hole “The Burn” 248 yards” 4 strokes; 4th Hole “The Crook” 335 yards, 5 strokes; 5th Hole “Far Hole” 254 yards, 4 strokes; 6th Hole “The Brae” 325 yards, 5 strokes; 7th Hole “The Dale” 340 yards, 5 strokes; 8th “The Gate” 262 yards, 4 strokes; 9th Hole “Home” 290 yards, 5 strokes. Total 2499 yards, 40 strokes. The main feature of play must be a air accuracy of line, as the course is bounded on the north by a sandy beach, from which good recovery is by no means easy, owing to the height of the braes, and a pulled ball on the return lands out of bounds in the crofters; cornfields. The hazards, consisting mainly of sand bunkers and a burn, are well utilised to guard the approaches to the greens, but the pitches on are by no means too difficult when the line is kept. The greens are on the small side, but will gradually be extended at each successive mowing and rolling to the standard size.

Wow, what a statement !

The John O' Groats Hotel was built in 1875 and "The Ha" and the rough grazing along the shore almost to "The Stacks" belonged to the hotel.  "Baillie Rae of Wick referred to the hotel visitors book when he told that a party of experienced golfers from London, Edinburgh and Glasgow had been the first to introduce the game of golf to the shores of the Pentland Firth in 1887.  These gentlemen gave their united testimony to the superiority of the course at John O' Groats to those of St Andrews and Musselburgh."(Source: John O'Groats Journal - files)

The Wick golf club had a great day of it at John O’ Groats on the Holiday when they went their annual excursion to that famed spot. Upwards of twenty mustered for play, being the largest number they have yet had. The day was brilliant and in driving to John O’ Groats the party took the new road by the Wart Hill which shortens the distance from Wick to John O’ Groats to about 16 ½ miles. After arrival, sport was immediately commenced and actively carried on until about 3 in the afternoon when the members of the club congregated in the John ‘O Groats Hotel and enjoyed their annual festive dinner with great hilarity. After dinner the company proceeded to the Sward at some distance in front of the Hotel and had a capital game of cricket. After this they adjourned for tea and spent the rest of the evening in a very pleasant way indeed. It was not before midnight that the party arrived home after an excellent outing. We were glad to notice as one of the happiest of the company, Mr Gilchrist, formerly agent for the Commercial Bank, Wick, who is here on a short visit.

As usual, the members of the Wick Golf Club had a jolly day at John O’ Groats, where golf and cricket were energetically indulged in. The party drove to John O’ Groats in three machines hired from Mr James Nicol Jnr, and the day being so fine made the excursion a particularly enjoyable one. Sport was at once commenced on arrival. From contributions by the players a prize-fund was made up and the following are the prize -winners in

A cricket Match followed the golf and an excellent dinner and tea was partaken of at the Hotel. 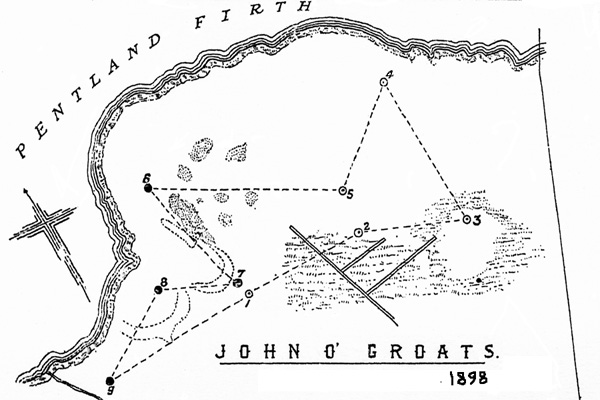 John O’ Groat’s, famed both from it’s geographical position and it’s legendary story, has now for visitors an additional attraction in a new golf course, opened on Saturday.

On a stretch of close turf overlooking the pentland firth, with it’s swiftly running tide and it’s beautiful beach of white shells, the proprietor, Captain E.S. Alexander-Sinclair, R.N., has had an excellent course of nine holes laid out, which was opened on Saturday with a competition in which all the Caithness club’s took part. Master Mervern Alexander-Sinclair, the youthful heir, duly opened the course by playing the first ball off the tee. A keenly contested game, in which over 60 golfers entered, was then played, the first prize falling to the youngest member of the Reay club, Mr Tom Morrison, who went the double round of the course in102. The players were agreed that, given a little time for the greens to improve by being played upon, the course will be a fine one, and one that will afford scope and hazard for the best players. 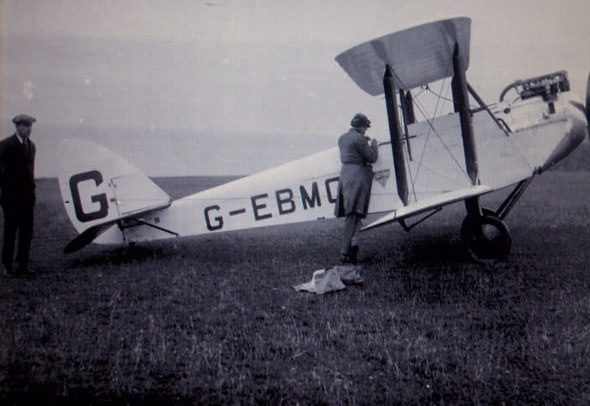 The golf course at John O'Groats was used often as a runway in the 1930s. 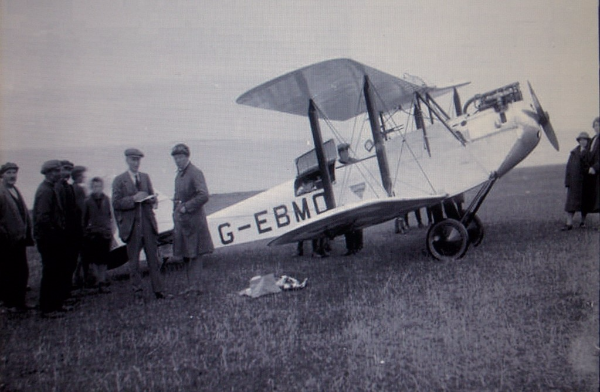