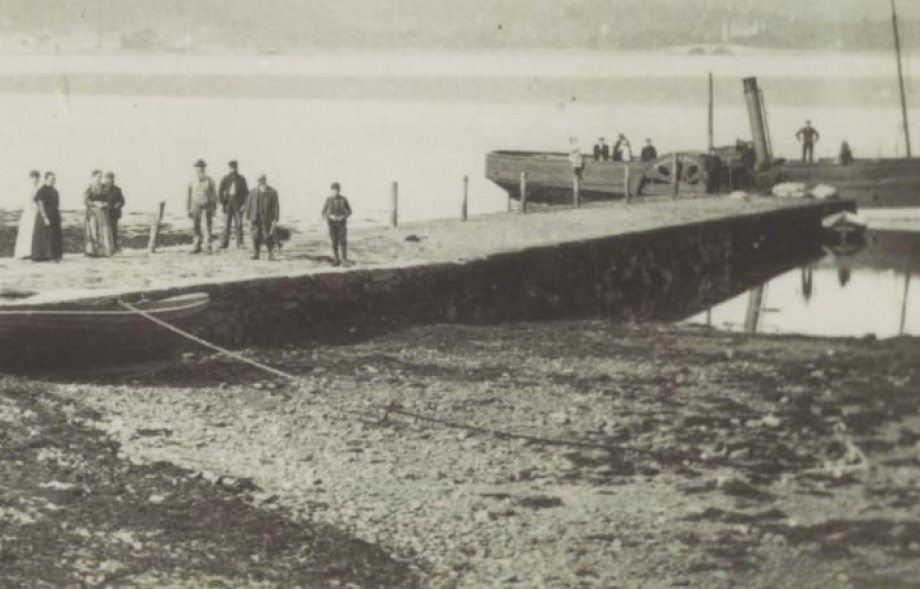 Strachur Golf Club.  Instituted 1896.  There appear to have been three distinct phases in the life of his club. The first took place on a 9-hole course on the farm of Craigenevar fifteen minutes from the pier. Little more was heard until 1906, when a new club was formed, with a course at Balliemeanoch Farm. In 1913 a course was opened again at Balliemeanoch, and what happened between 1906 and 1913 is a mystery, but obviously, the club must have folded sometime between these years. 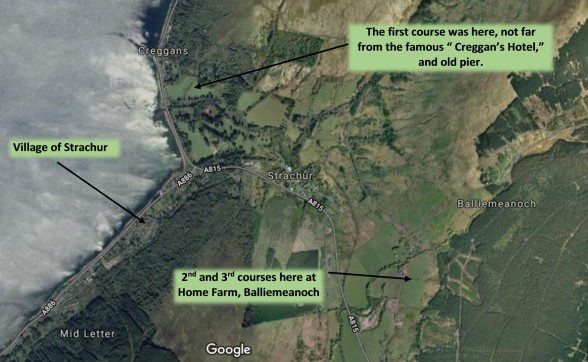 “The new golf course at Strachur, the picturesque little village on the eastern side of Loch Fine, was formally opened on Saturday, 4th inst. at Craigenevar, when the first ball was driven off by Sheriff Shairp.  This course, which has been laid out by Mr Grant, of Creggans Hotel, for the benefit of visitors, is situated on his farm at Craigenevar, and is only a short distance from the pier.  It was marked off by Sheriff Shairp and Mr Wright, banker, Inveraray, about the middle of last month, and the laying out has just been finished. It is a nine holed course, the distances being;- first, 170 yards; second, 200yds; third, 80yds, fourth,130yds; fifth,116yds;sixth,137yds; seventh,212yds; eighth,80yds; ninth, 90yds.  The holes, it will be observed, are rather short, but it is intended to rearrange some of them, and, at the same time, to improve the greens, which at present are somewhat rough.  Several of the holes have trees for hazards; other hazards are a burn and clumps of long grass and reeds.  At the opening on Saturday a number of the members of the Inveraray Club played a round, with the following results;- Mr W.Stewart,39;Mr C. Macarthur, 42; Sheriff Shairp, 49; Mr John Rose, 50; Mr Alexander Hannah, 51; Mr Ernest smith,52; Mr Gilmour, 53; Mr Allister MacArthur, 56.  The weather was favourable during play, but the ground was not at its best, rain having fallen heavily all the morning. Several coast visitors were present and took an active interest in the proceedings. At the finish players were entertained by Mr Grant, and Sheriff Shairp, who presided, expressed the hope that the course would be a success.” (OT 18.7.1896) 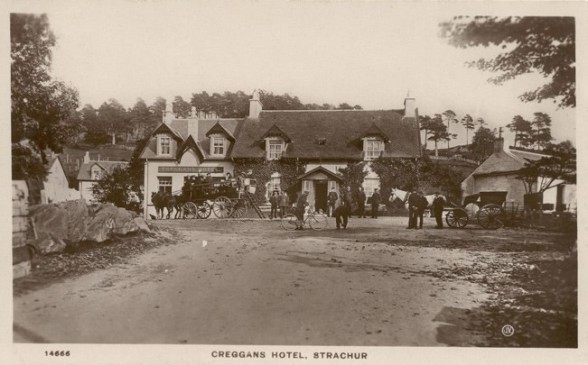 This Inn / Hotel was visited by the rich and famous over the years and has a very interesting history, and is worth a look. www.creggans-inn.co.uk  The course was located on a small hillside behind the hotel.

“Some time ago, at a series of meetings held by those interested in the formation of a golf club for Strachur and Strathlachlan, it was resolved unanimously to carry the project into effect, and steps were taken immediately to construct a nine hole course. The ground selected is that tenanted by Mr J.C. Grant, Creggan’s Hotel, at Craigeniver, and the contract was entrusted to Messrs Peter and Fergus Ferguson, the Bay. The ground is now ready, and the contractors are to be highly congratulated on the excellency of the work done for the club. All the greens are well placed, of good size, and perfect finish. Saturday first at 3 o’clock, will see the opening of the course, when Mr R.H. Plowden of Strachur will drive the opening ball, and declare the course open. No doubt Mr Plowden, being a golfer, will have something to say in praise of the game and commend it to the parishioners and visitors. It is hoped that the course will become popular, and that the committee will be supported financially by the householders, in view of the course being a decided acquisition to the district. The Secretary and Treasurer is the Rev. Alex MacDonald, Ivy Cottage.”

The new golf course at Balliemeanoch Farm, Strachur, was formally opened yesterday when Mr R.H.Plowden of Strachur drove the first ball and declared the course open.

On New Years Day the nine hole golf course at Strachur was formally opened for play. The ground for the course, which is on the Home Farm at Balliemeanach, situated conveniently in the centre of the village, has been kindly granted free by Mr and Mrs R.H. Plowden, of Strachur Park, who have also contributed handsomely to the cost of formation.

The opening ceremony took the form of a scratch stroke competition open to all, for a monthly medal and prizes. The Captain (Mr Alex McVicar) drove off the first ball shortly after 11 am., and the various couples were followed by interested onlookers. The course, though short, affords quite a test of accurate play, and the competitors had a better game than they expected, as it is not long since work was started on the new greens, etc. The result was as follows:-  First Prize, Silver Medal, presented by Mr J.S. Ainsworth, M.P. (To be competed for as a monthly medal) and two golf balls, presented by Rev. D.M. McCalman, Vice President, won by Mr Duncan Campbell (Vice Captain) – scores 43 and 36, total 79, second prize, Cake, presented by Mr Alex McVicar, Captain, won by Rev. D,M. McCalman – scores 41 and 39, total 80. The excellent score made by Mr Campbell in his second round was very consistent and well worthy of the first prizeman, 4,5,4,5,4,3,3,3,5 – 36.” (OT 13.11.1913) 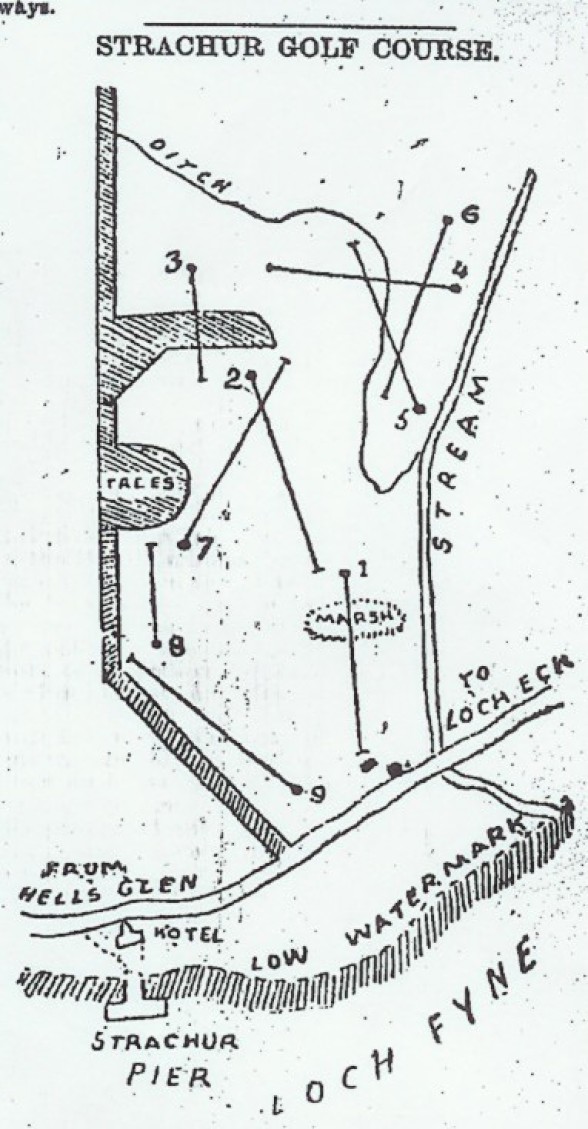 Layout location of the first course near the hotel